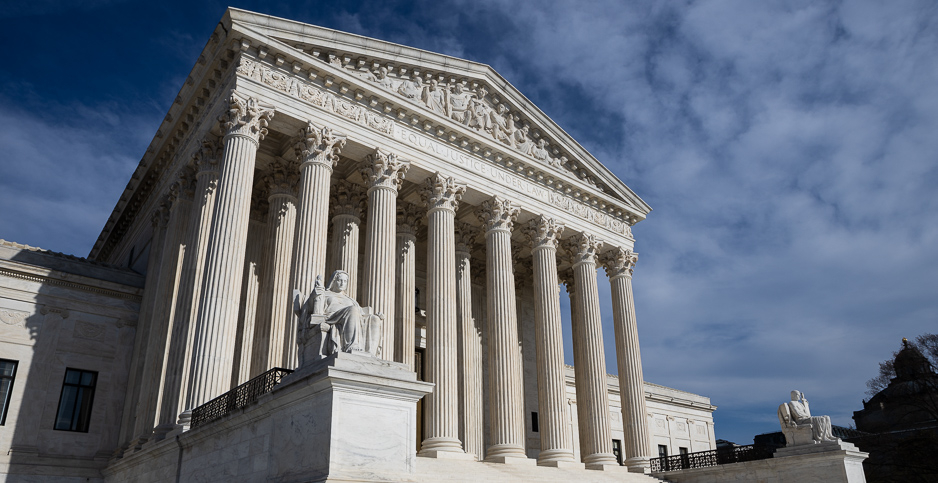 When the Supreme Court returns from its winter recess, the justices will have an unusually heavy load of environmental cases to sift through — and potentially more to come.

What began as a sleepy term on environmental issues — with only an interstate water fight and an EPA records dispute on deck — has blossomed into a term filled with prominent pipeline, climate and biofuels battles. And the Supreme Court could soon choose to weigh in on a number of other pending matters, including the high-stakes kids’ climate case, Juliana v. United States.

"Without question, there is no reluctance to take environmental cases," said John Cruden, a principal at Beveridge & Diamond PC and former head of the Justice Department’s environment division.

Justice Amy Coney Barrett, the Supreme Court’s newest member, has so far given few indications of how her addition to the bench could affect the outcome of environmental cases. The court’s only environmental opinion so far this term hung on technical issues that are not typically decided along ideological lines.

Due to the ongoing coronavirus pandemic, Barrett has so far only been able to hear arguments in a remote capacity, which has changed the game for court watchers who analyze the justices’ questions in an attempt to predict how they might eventually rule.

"At some point, she will emerge and show whatever her true colors are likely to be," said Bob Percival, director of the University of Maryland’s Environmental Law Program. He added: "Inevitably, she’s going to change the balance of the court."

The transition from the Trump to the Biden administration has also affected the pace at which the Supreme Court will eventually weigh in on major environmental battles, like EPA’s regulation of carbon emissions from power plants and the federal government’s determination of which waterways and wetlands are subject to Clean Water Act protections.

The Biden administration is widely expected to craft new regulations on both issues after former President Trump’s EPA repealed both the Obama-era Clean Power Plan and Clean Water Rule. Trump’s Clean Power Plan replacement, the Affordable Clean Energy rule, was struck down last month by the U.S. Court of Appeals for the District of Columbia Circuit.

Biden has also reversed course on the Trump administration’s efforts to build a border wall between the United States and Mexico. That has led the Supreme Court to cancel arguments that were originally scheduled for next week in Trump v. Sierra Club, in which environmental and community groups challenged the previous administration’s plans to fund the project.

Biden’s arrival in the White House has also spurred calls by some liberal groups for Justice Stephen Breyer, the Supreme Court’s eldest justice, to step aside to make sure a Democratic administration has the chance to choose his successor.

The transition between presidential administrations has rocked agencies like EPA, which have been tasked with unwinding scores of Trump-era environmental rollbacks, and Congress, which had been embroiled in impeachment proceedings for Trump.

Comparatively little has changed for the nation’s highest court, said Cruden, who has witnessed transitions between Republican and Democratic administrations during his time at DOJ.

"At least one part of our government is handling the transition relatively straightforwardly," he said.

In its sole environmental ruling so far this term, the Supreme Court sided with New Mexico in the state’s fight with neighboring Texas over stored floodwaters on the Pecos River.

The justices found that the Land of Enchantment didn’t owe downstream Texas any more Pecos flows after receiving credit for agreeing to hold back floodwaters from Tropical Storm Odile in 2014. The 1949 Pecos River Compact sets the terms of a water-sharing agreement between the states.

The Supreme Court’s ruling in Texas v. New Mexico came as a relief to water experts who warn that the justices cannot afford to referee every interstate water feud that comes its way. Climate change is expected to bring many more such battles to the high court.

"A lot of these compacts are going to be increasingly challenged by either major storm events, floods, prolonged droughts or all sorts of impacts climate change will bring, and a lot of them don’t have great provisions for dealing with those," said Robin Kundis Craig, a law professor at the University of Utah. "So to see the Supreme Court uphold an emergency decision … is a good thing."

The justices have agreed to hear one other interstate water case this term.

Fish and Wildlife Service v. Sierra Club: The Supreme Court will decide in the coming months whether the public should be able to access documents related to the government’s about-face on its determination that a 2014 EPA rule would harm vulnerable plants and animals.

The case, the first that Barrett heard after her confirmation to the court, garnered the support of groups whose interests aren’t typically aligned in legal battles.

Both the Sierra Club and a set of farm and forestry industry groups say the government should disclose the records under the Freedom of Information Act.

Ford Motor Co. v. Montana 8th Judicial District Court: The justices will soon decide whether a feud over car defects that led to a fatal 2015 crash belongs in a Montana court.

If the justices agree with Ford that a state court is not the proper venue for the case, the decision could have a chilling effect on a slew of lawsuits filed by states and municipalities seeking fossil fuel industry compensation for the local impacts of climate change.

BP PLC v. Mayor and City Council of Baltimore: The justices have yet to resolve a procedural battle between fossil fuel companies and Baltimore officials seeking industry compensation for climate impacts. The narrow question before the justices is whether federal appeals courts can review the entire scope of U.S. district court orders that toss climate cases back to the state benches where they were originally filed.

The outcome of the case has the potential to derail a growing set of climate liability cases in courts across the country. A handful of other petitions stemming from litigation from other states, cities and counties are currently pending before the Supreme Court.

Florida v. Georgia: In the second water case of the term, the justices will examine Florida’s claims that upstream Georgia should limit its use of flows from the Apalachicola-Chattahoochee-Flint River Basin. The Sunshine State argues that the Peach State’s overuse of the river system is hurting downstream oyster fisheries. Arguments are scheduled for Feb. 22.

Cedar Point Nursery v. Hassid: Next month, the justices will review a lower court’s finding that a California law allowing labor organizers to access land owned by agricultural operators does not constitute a "taking" under the Fifth Amendment to the Constitution because it is not a permanent physical invasion of the property. Arguments are set for March 22.

PennEast Pipeline Co. LLC v. New Jersey: The Supreme Court agreed this month to weigh in on whether a private company can use eminent domain to seize state land to build a pipeline, if a state objects to the project.

PennEast Pipeline Co. is urging the high court to overturn a lower bench’s ruling that found that bringing condemnation proceedings against New Jersey violated the state’s constitutionally protected sovereign immunity. Arguments are not yet scheduled.

Hollyfrontier Cheyenne Refining LLC v. Renewable Fuels Association: The Supreme Court has agreed to wade into a divisive fight over biofuel blending requirement exemptions for small refineries. The Biden administration has said it plans to walk back those exemptions, which biofuel and renewable fuels groups oppose.

Petroleum industry interests say that Congress intended to offer small refineries relief from costly renewable fuel standard requirements, but judges for a lower court said EPA could only extend prior waivers. Arguments have not yet been scheduled.

Guam v. United States: In this dispute between the federal government and one of its territories, the justices will weigh in on whether the United States was wrong to stick Guam with the $160 million bill to clean up a landfill that was first a Navy waste dump. Arguments have not yet been scheduled.

Yellen v. Confederated Tribes of the Chehalis Reservation: In this consolidated case, Alaska Native corporations and the Treasury Department are challenging a ruling by a federal appeals court that excluded the federally created private companies, many of which have substantial oil and gas investments, from accessing part of the $8 billion in federal emergency coronavirus aid designated for tribal governments. Arguments have not yet been scheduled.

The Supreme Court agrees to hear only about 1% of cases that come its way. Here are some of the environmental battles that the justices have been or will soon be asked to review:

Massachusetts Lobstermen’s Association v. Ross: The Supreme Court has yet to decide whether it will take up commercial fishing groups’ fight against the Obama administration’s designation of the Northeast Canyons and Seamounts Marine National Monument off the coast of Cape Cod, Mass.

Montana and Wyoming v. Washington: A pair of coal-producing states are asking the Supreme Court to use its original jurisdiction authority to hear a fight between states over the proposed Millennium Bulk Terminals export project.

Montana and Wyoming are challenging Washington state’s decision to deny a water quality permit for project developer Lighthouse Resources Inc., on the grounds that it cut off the states’ access to Asian markets and impeded the Trump administration’s coal export policy. Washington has defended its decision, saying the state blocked the project because of the risks it posed to the environment.

LSP Transmission Holdings LLC v. Katie Sieben: An electric utility is asking the justices to determine whether a 2012 "right of first refusal" law in Minnesota giving utilities with an in-state presence priority for certain types of projects violated constitutional protections for interstate commerce under the "dormant" commerce clause. LS Power has argued that allowing the law to remain in place would hinder renewable energy development.

Juliana v. United States: Challengers in the so-called kids’ climate case have not filed a Supreme Court petition in their fight to push the U.S. government to phase out fossil fuels, but they are expected to do so soon.

Environmental lawyers have warned the Juliana challengers to keep their case out of the hands of the Supreme Court’s newly entrenched 6-3 conservative majority, but Our Children’s Trust, the group behind the young people’s challenge, indicated last week
that it planned to ask the justices to overturn the challengers’ loss in a lower court.