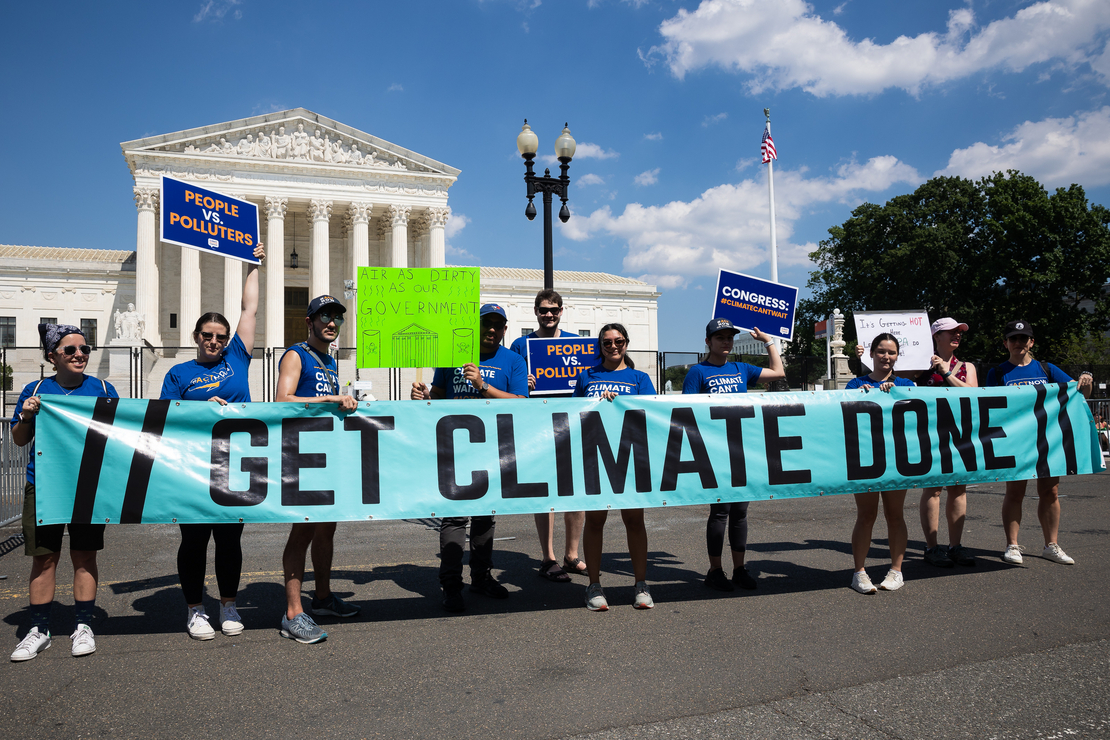 Activists with the Climate Action Campaign protest outside the U.S. Supreme Court after the court announced its decision in West Virginia v. EPA on June 30. Francis Chung/E&E News/POLITICO

Environmental lawyers say the Supreme Court sent a clear message in its landmark ruling in West Virginia v. EPA: If a federal agency wants to craft robust climate regulations, it better not crow about them.

If EPA — or any other federal agency, the White House or even advocacy groups — touts a regulation’s climate significance, lawyers said, that rule could fall victim to the so-called major questions doctrine, which the six-justice conservative majority applied last month in West Virginia to strike down the Obama administration’s Clean Power Plan (Greenwire, June 30).

The ruling is littered with references to congressional testimony, press releases from environmental groups and White House fact sheets to illustrate that the plan — which was finalized in 2015 but never officially took effect — was a regulation of “vast economic and political significance” subject to scrutiny under major questions, said lawyers during a panel discussion last week hosted by the Environmental Law Institute.

“All of that noise about this being the biggest thing we’ve ever done, the most monumental — that should be tamped down if an agency wants to avoid major questions. That’s an obvious point,” said Kevin Poloncarz, a partner at the firm Covington & Burling LLP who represented power companies defending EPA authority in West Virginia.

He later added: “It is so funny because we thought these were all about lawyerly arguments, and to some extent, I think it’s more about PR because we need to make sure that the politicals don’t get out there in front of the lawyers.”

The practical implication of the ruling, therefore, could be that agency leaders curb a typical part of their work: explaining the import of their actions to the public. It also illustrates the far-reaching implications of the still-evolving major questions doctrine embraced by the Supreme Court’s conservative majority, which suggests Congress must spell out agencies’ authority when directing them to craft consequential regulations.

Poloncarz flagged Chief Justice John Roberts’ mention in the majority opinion of then-EPA Administrator Gina McCarthy’s 2014 congressional testimony that the Clean Power Plan — which set out to reduce carbon emissions from power plants 32 percent from 2005 levels by 2030 — was “not about pollution control” but was an opportunity for states to invest in new energy sources.

The Clean Power Plan would have achieved its goals by declaring that the “best system of emissions reduction” under Section 111(d) of the Clean Air Act included shifting the generation source of power plants from coal to natural gas or renewables.

Poloncarz also noted Justice Neil Gorsuch’s reference to former President Barack Obama’s statements in 2014 that if the Republican-controlled Congress failed to act, he would do it unilaterally.

Obama’s comments on the unveiling of the Clean Power Plan even came up during oral arguments in 2020 before the U.S. Court of Appeals for the District of Columbia Circuit, which last year struck down the Trump-era Affordable Clean Energy rule that had effectively gutted the Clean Power Plan.

The Supreme Court overturned the D.C. Circuit ruling with its decision last month in West Virginia.

During arguments in 2020, Judge Justin Walker, a Trump appointee to the D.C. Circuit, cited Obama’s 2015 statement that the Clean Power Plan was the “single most important step America has ever taken in the fight against global climate change,” equivalent to removing 166 million cars from the road (Greenwire, Oct. 8, 2020).

“How can something not be a major rule when it’s the ‘single most important step America has ever taken’?” Walker asked at the time.

He later penned a dissent in the D.C. Circuit ruling, finding that the Clean Power Plan should have been struck down under major questions.

Writing for the majority in the Supreme Court ruling, Roberts in a footnote cited Walker’s dissent and rejected the liberal justices’ position that the Clean Power Plan was business as usual for EPA.

The chief justice said there was an “obvious difference” between a rule that leads to “an incidental loss of coal’s market share” and “simply announcing what the market share of coal, natural gas, wind, and solar must be.”

Roberts’ use of the word “incidental” is troubling, said Georgetown University law professor Lisa Heinzerling, who crafted the winning argument for states and environmentalists in Massachusetts v. EPA, the 2007 case that recognized the federal government’s authority to regulate greenhouse gas emissions under the Clean Air Act.

“My worry is that that word ‘incidental’ will come up and bite EPA if they talk about climate change in addition to the other things, and I don’t mean to say this in a strong way like EPA should never say the words. I think that’s terrible,” she said.

“But I think it’s a mark of how both aggressive this Supreme Court seems,” she continued, “how — to me — untrustworthy it seems and how worried we should be in the aftermath that just talking about climate might get [EPA] into trouble.”

Jonathan Adler, director of the environmental law center at Case Western Reserve University, said during a recent panel discussion hosted by the Georgetown Climate Center that EPA should take note of the Supreme Court’s language when the agency works on other pollution rules that may have climate benefits.

“If I’m a lawyer in the EPA’s general counsel’s office,” he said, “I am scrubbing every document, every speech, every talking point to make sure that any climate benefits are ancillary, secondary and, oh, yes, we get that, too, and not say anything that suggests that that’s the reason for the policy.”

That approach should be nothing new for EPA lawyers, said Matt Leopold, who served as agency general counsel during the Trump administration.

“This case reinforces that EPA and other agencies must be very careful in the public statements they make about regulations and the intent of the regulations,” said Leopold, now a partner at Hunton Andrews Kurth LLP, in an interview. “As a former counselor to an administrator of EPA, that was always something we were mindful of.”

But Liz Purchia, who served as an adviser and spokesperson under McCarthy during the Obama years, said the Supreme Court’s West Virginia ruling is likely to transform communication not only by EPA but also by environmental groups and other federal agencies.

“We will see a return to the way the agencies were talking about climate change during the Trump administration, which is to say they were not highlighting it, and they were trying to be more creative by focusing on the other more traditional pollutants and the impact we could have cleaning those up,” said Purchia, who is now communications director for the Harvard Center for Climate, Health and the Global Environment.

She later added: “You can stop using the word ‘climate change,’ but it doesn’t actually stop climate change from happening.”