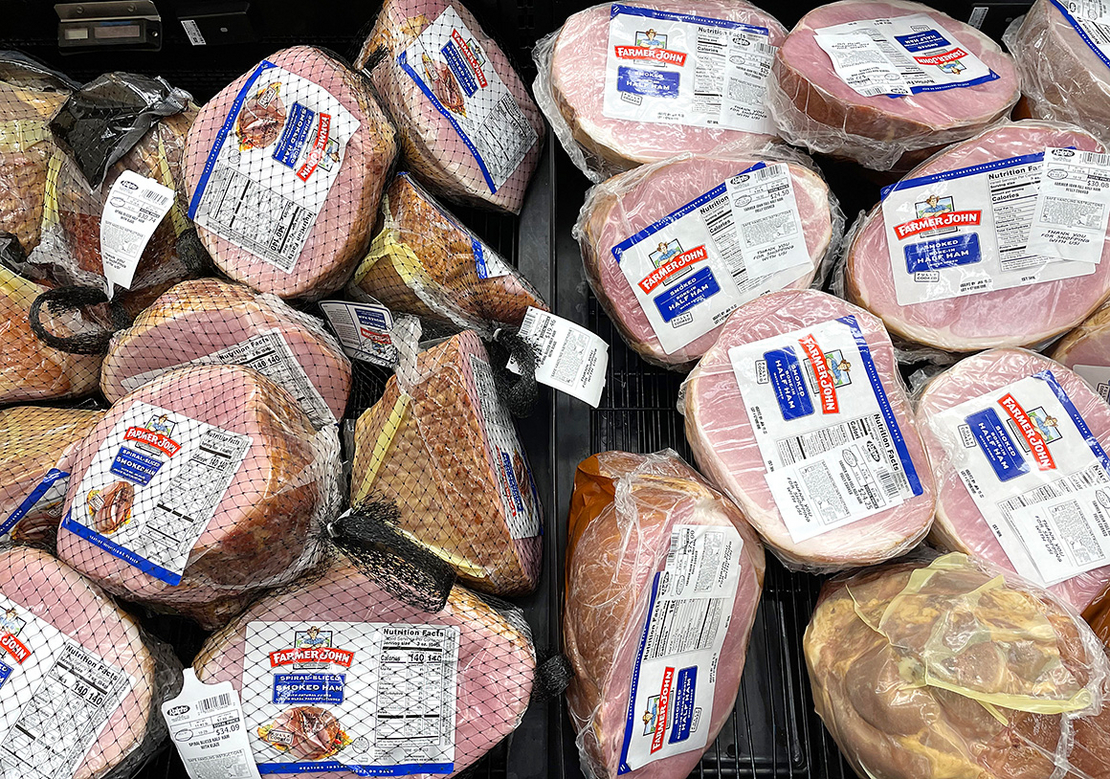 Smoked ham is displayed for sale in a grocery store ahead of the Thanksgiving holiday in 2021 in Los Angeles, Calif. Mario Tama/Getty Images

The Supreme Court today agreed to get involved in a California pork production dispute that has the potential to affect other legal battles over state environmental regulations.

In its order list this morning, the justices indicated that they would consider National Pork Producers Council v. Karen Ross, a challenge to California’s Proposition 12, which bans pork sales in the state unless farmers meet specific space standards for sows.

“Californians account for 13% of the Nation’s pork consumption, but raise hardly any pigs,” pork producers and farmers wrote in their Sept. 27 petition to the Supreme Court. “The massive costs of complying with Proposition 12 fall almost exclusively on out-of-state farmers.”

Pork producers claim that the California law violates the dormant commerce clause, which prohibits states from discriminating against interstate commerce.

The Supreme Court has previously rebuffed similar claims against state climate and energy laws, like fuel emissions programs in Oregon and California (Greenwire, May 13, 2019).

Dormant commerce clause cases have the potential to divide the court in surprising ways. The Supreme Court is currently dominated by six conservative justices — some of whom may favor states’ rights to craft their own environmental rules.

Conservative Justices Neil Gorsuch and Clarence Thomas, for example, dissented in a 7-2 ruling in 2019 that rejected Tennessee’s residency requirements for liquor store operators in the state (Energywire, June 27, 2019).

“Today and for the first time, the Court claims to have discovered a duty and power to strike down laws like these as unconstitutional,” wrote Gorsuch at the time. “Respectfully, I do not see it.”

California had urged the justices, who decline to take up most petitions that come their way, to reject the pork producers’ plea.

“In 2018, nearly two-thirds of California voters approved Proposition 12, adopting certain minimum standards for pork and other animal products sold within the State,” wrote attorneys for Karen Ross, secretary of the California Department of Food and Agriculture, in a Dec. 21 filing.

“Most of those standards have already gone into effect, including the restriction on the sale of pork derived from breeding pigs not provided enough space to stand up or turn around freely,” they continued.

State lawyers added that every lower court to consider a dormant commerce clause challenge to California’s Proposition 12 had rejected it and noted that the Supreme Court has denied similar questions in the past.

The department could not be reached for comment this morning on the Supreme Court’s decision to take up the case.

The National Pork Producers Council and the American Farm Bureau Federation, the petitioners in the case, celebrated the court’s order this morning.

“NPPC has poured a lot of blood, sweat and tears into preserving the rights of America’s pork producers to raise hogs in a way that’s best for their animals’ well-being and that allows them to continue selling pork to all consumers, both here and internationally,” said council President Terry Wolters in a statement this morning.

The case, which is expected to be argued next term, could be one of the first Judge Ketanji Brown Jackson considers, if she is confirmed to the Supreme Court.