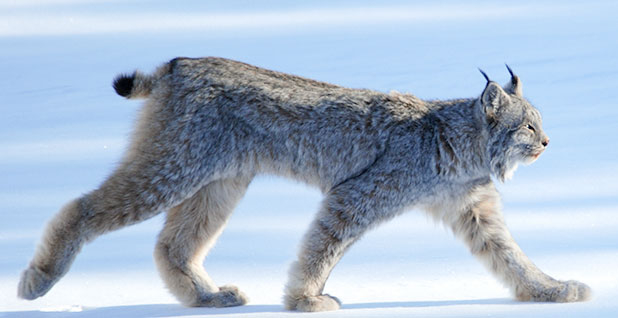 The Supreme Court has declined to take up the government’s appeal in a case involving critical habitat protections for the Canada lynx in national forests.

The court’s eight justices rejected the closely watched case today in a customary short order. The Forest Service was appealing the 9th U.S. Circuit Court of Appeals’ finding that environmentalists had legal standing to sue over a critical habitat designation for the lynx.

Law experts had given the case good odds of being picked up by the high court, given that the 9th Circuit’s decision could have big impacts on the ability of groups to challenge forest management decisions and on how the Forest Service manages for listed species.

"It would be a very interesting standing case," Robert Percival, director of the environmental law program at the University of Maryland’s Francis King Carey School of Law, said last week. "It could be an opportunity for the court to revisit this area that’s been kind of a mess with the court going back and forth in 5-4 decisions in previous years."

In 2006, the Fish and Wildlife Service established critical habitat for a distinct population segment of the Canada lynx, a cousin of the bobcat found in the northern Rocky Mountains.

FWS’s designation didn’t include any national forestland, but a year later, the Forest Service adopted provisions to preserve the lynx and its habitat in 20 forest management plans in 18 National Forest System units. The Forest Service consulted with FWS, as is required under Section 7 of the Endangered Species Act.

Two years later, FWS extended critical habitat protections for the lynx to 11 national forest areas in Idaho, Montana, Washington and Wyoming that were covered by the Forest Service provisions.

The Cottonwood Environmental Law Center, a nonprofit law and conservation organization, brought suit, arguing that the Forest Service was required by law to reinitiate consultation when FWS expanded the habitat.

In particular, the group complained about a project in Montana’s Gallatin National Forest to clear vegetation across nearly 900 acres.

The 9th Circuit unanimously found both that the center had standing to sue and that the Forest Service should have again consulted with FWS (E&ENews PM, June 17, 2015).

In its appeal to the Supreme Court, the Justice Department argued that the group couldn’t show that members were directly harmed by the agencies’ failure to reinitiate consultation, as is required to prove legal standing.

DOJ also argued that the 9th Circuit decision contradicted the Supreme Court’s 2009 decision in Summers v. Earth Island Institute, in which justices rejected a challenge by environmental groups to general rules issued by the Forest Service for reviewing future projects.

The late Justice Antonin Scalia was the deciding vote in the 5-4 decision in Summers.

The standing issue is particularly important, government attorneys argued, because it would allow an organization to seek broad relief against a regulation or plan without challenging a specific on-the-ground project — as long as it files suit in the 9th Circuit.

"The Forest Service and BLM would be substantially hampered in their ability to implement regulations and management plans" if that happened, DOJ said.

The government also objected to the 9th Circuit’s finding that the Forest Service was required to reinitiate formal consultation with the Fish and Wildlife Service after it extended the lynx’s critical habitat.

The requirement that land management agencies formally consult with FWS whenever a new species is listed, new critical habitat is designated or new information on a listed species becomes available "has the potential to cripple" the Forest Service and Bureau of Land Management, the Department of Justice argued.

"This is a stunning conclusion from the practical perspective of managing scarce agency resources," the federal petition to the Supreme Court said.

The Cottonwood Environmental Law Center had asked the Supreme Court to reject the petition, arguing that it submitted seven statements from six of its members showing that projects under the lynx amendments were causing harm.

Cottonwood also disputed that there was a split among appeals courts in how they apply standing in similar cases.

Among the dozens of denials issued today, the Supreme Court also declined to take up a case involving critical habitat for the green sturgeon. It takes the votes of four justices for the high court to hear a case.

At issue in the sturgeon case was the extent to which the government’s decisions about critical habitat designations for endangered and threatened species can be challenged in court.

In October 2009, the National Marine Fisheries Service designated thousands of square miles of critical habitat for the green sturgeon, a bottom-dwelling species that lives in coastal estuaries and marine waters from Mexico to Alaska.

The sturgeon’s southern population segment, only known to spawn in the Sacramento River, has been threatened by dam construction, pesticides, bycatch, poaching and the introduction of exotic species.

Property owners and builders had challenged the decision by NMFS to not exclude from its critical habitat any areas with a high likelihood of promoting the sturgeon’s conservation, regardless of the economic impacts.

They wanted the Supreme Court to rule that the lower courts had erred in finding that such government decisions against excluding areas from critical habitat can’t be challenged.

But the Obama administration urged the high court to reject the case. The Department of Justice argued that NMFS’s decision was consistent with the law because the Endangered Species Act gives NMFS the discretion to not exclude areas from critical habitat.

And even if NMFS’s decision was reviewable by the courts, DOJ argued that the agency did consider economic effects of its designation decisions (Greenwire, Aug. 10).

The Forest Service’s rule excluded parcels in Colorado that the ski industry had targeted for potential future development from the protections afforded by a roadless designation.

The U.S. Court of Appeals for the District of Columbia Circuit upheld the rule in March, finding in part that the Forest Service had adequately explained its actions (Greenwire, March 8).

In their appeal, environmentalists had argued that the Colorado roadless rule was based "entirely on political and economic considerations" and would set a "grave precedent that will undermine the integrity of the inventory."

Bill Eubanks, an attorney for the environmentalists in the case, said in a recent interview that he worried the decision would open the door for other economically important industries to seek exclusions from the inventory.