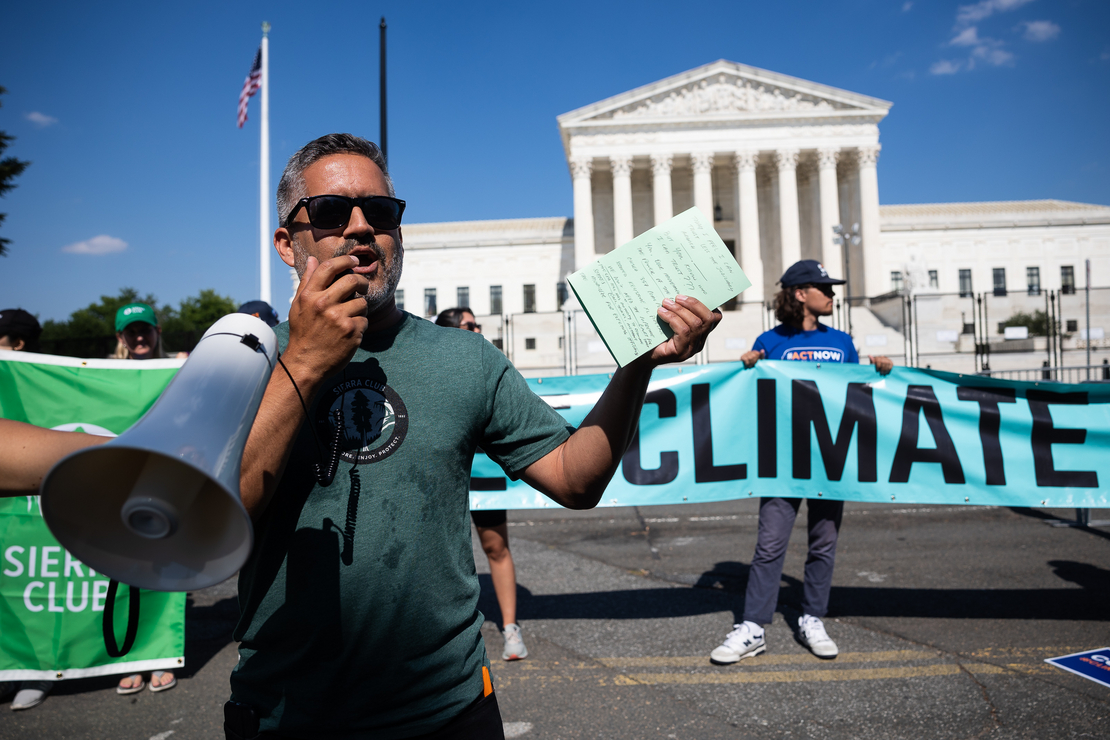 EPA’s ability to curb greenhouse gas emissions from coal-fired power plants was sharply curtailed, but not eliminated, by a Supreme Court ruling yesterday that underscores the challenges of achieving significant climate gains in the United States.

In a 6-3 opinion on the most significant climate change case to reach the high court in a decade, the justices found that Congress did not give EPA the authority to impose a sweeping emissions rule like the Obama-era Clean Power Plan, a proposal that was never applied in the real world.

That leaves the Biden administration — which had no plans to use the dormant Clean Power Plan — with fewer options to tackle the second-largest source of climate warming emissions in the country.

The ruling is a “major setback” for EPA’s ability to address climate change, said Harvard University environmental law professor Richard Lazarus, who noted it “could hardly have come at a worse time.”

“Fortunately, the Clean Air Act statutory provision at issue in this case is not the only basis upon which the agency may rely to address climate change,” he added. “But the court’s ruling is plainly a deliberate shot across the bow over EPA’s most ambitious plan.”

The court rejected EPA’s argument that the language of the Clean Air Act — which Lazarus called “admittedly broad and capacious” — was sufficient to validate the Clean Power Plan.

But, Lazarus said, “by insisting instead that an agency can promulgate an important and significant climate rule only by showing ‘clear congressional authorization’ at a time when the court knows that Congress is effectively dysfunctional, the court threatens to upend the national government’s ability to safeguard the public health and welfare at the very moment when the United States, and all nations, are facing our greatest environmental challenge of all: climate change.”

The ruling did not handcuff EPA as far as some environmental attorneys had feared it could have, but it provided one of the first glimpses of how the court’s new 6-3 conservative majority will approach questions about climate change and the federal government’s role.

And one justice said it’s not a good look. In a blistering dissent, Justice Elena Kagan accused the majority of preventing a “congressionally authorized agency” from curbing carbon dioxide emissions.

“Whatever else this Court may know about, it does not have a clue about how to address climate change,” Kagan wrote, joined by the court’s two other liberals, Justices Stephen Breyer and Sonia Sotomayor. “The Court appoints itself — instead of Congress or the expert agency — the decision maker on climate policy. I cannot think of many things more frightening.”

West Virginia Attorney General Patrick Morrisey, a Republican who brought the case with several GOP counterparts and the coal industry, hailed the opinion as the “correct decision to rein in the EPA, an unelected bureaucracy.”

Writing for the majority, Chief Justice John Roberts said the justices were skeptical that Congress would leave to “agency discretion” such a vast matter, such as the decision of how much coal-based power generation there should be in the United States over the coming decades.

“The dissent contends that there is nothing surprising about EPA dictating the optimal mix of energy sources nationwide, since that sort of mandate will reduce air pollution from power plants, which is EPA’s bread and butter,” Roberts wrote. “But that does not follow … We would not expect the Department of Homeland Security to make trade or foreign policy even though doing so could decrease illegal immigration.”

And, Roberts added, “no one would consider generation shifting a tool” in the Occupational Safety and Health Administration’s toolbox, “even though reducing generation at coal plants would reduce workplace illness and injury from coal dust.”

In a concurring opinion, Justice Neil Gorsuch, joined by Justice Samuel Alito, endorsed the use of the so-called major questions doctrine, calling it a “relatively easy case” for its application.

“The agency before us cites no specific statutory authority allowing it to transform the nation’s electrical power supply,” Gorsuch wrote, finding that “agency officials have sought to resolve a major policy question without clear legislative authorization to do so.”

But, he said, EPA can regulate those plants by requiring them to engage in reductions through changes in operation or technological fixes to individual plants.

“The problem with that is that the latter approach will likely generate a tiny reduction in greenhouse emissions compared to generation shifting,” Glicksman said. He noted that, “in theory,” EPA could require carbon capture and sequestration at individual plants.

But he said that if the cost or technological hurdles proved too much, “I suspect this court would strike that down, too.”

Glicksman noted Roberts had left open the possibility that EPA could use “beyond-the-fenceline” measures other than generation shifting to cut emissions, but said the chief justice “didn’t give examples, and it’s not clear what he means.”

Those measures could include a combination of carbon capture or emission trading and biomass co-firing, Glicksman suggested, adding, “who knows? What is clear is that EPA’s authority and flexibility to engage in meaningful regulation of GHG emissions under section 111(d), and perhaps under the CAA more broadly, has been sharply constrained.”

The Biden EPA plans to propose a new power plant rule by March 2023 and will likely finalize the regulation in 2024 — the last year of President Joe Biden’s term in office.

Dena Adler, a research scholar at the Institute for Policy Integrity at New York University School of Law, said Congress wrote the Clean Air Act to broadly protect public health “with a design that is technology-forcing and adaptive.”

She said that although the court found EPA does not have the authority to use the broad, generation-shifting approach embraced by the Clean Power Plan, it still retains the authority to limit greenhouse gas emissions — and may be able to go further than it would have under the narrow Trump-era Affordable Clean Energy rule.

“EPA is not limited to increasing the efficiency of power plants through heat rate improvements as it did in the toothless ACE rule,” Adler said, adding that the agency could look at other techniques such as co-firing, carbon capture and sequestration.

But Adler warned that the case could be the “canary in the regulatory coal mine” because the court relied on the little-used “major questions doctrine” to reach its conclusion that EPA had veered beyond its congressionally approved instructions.

Adler warned that applying the major questions legal theory more broadly — as conservative judges on the court have increasingly done to block regulatory initiatives — “will create more uncertainty for agencies and the entities that they regulate.”

“The major questions doctrine is in part problematic because Congress has legislated for decades with an expectation that it can broadly authorize agencies to use their expertise,” she said. “Yet, as the court applied it today, the doctrine looks skeptically on agencies regulating under this broad authorization.”

Charles Driscoll, a professor of environmental systems at Syracuse University’s College of Engineering and Computer Science, said the ruling may well go beyond climate.

“This will have huge implications for the ability of agencies to address complex technical challenges,” he said, adding that the ruling has implications for other matters such as public health and safety.

Ahead of the decision, analysts said it was unlikely to have a major near-term effect on the power sector because emissions have already fallen below the targets of the 2015 Clean Power Plan.

Still, the decision comes as planet-warming emissions have proven increasingly tricky to constrain globally and as the White House tries to balance its efforts to curb climate change with its attempts to lower soaring gasoline prices.

Biden’s aggressive climate agenda has been hobbled by a narrow Democratic majority in the Senate and Republican opposition, putting renewed emphasis on executive action and other existing regulations that could be restricted by future court rulings.

The decision came as the court signaled in a landmark abortion case last week that it may make it tougher for environmental and climate lawsuits to reach the court.

Justice Samuel Alito raised the issue of third-party standing in Dobbs v. Jackson Women’s Health Organization, raising concern among environmentalists that the justices might use the doctrine to block them from getting heard in court (Climatewire, June 27).

Democrats are making the abortion ruling a campaign issue ahead of the November midterms, and the court’s EPA ruling is also likely to be used to rally climate-minded voters.

The ruling is a major victory for chief law officers in red states. The Republican Attorneys General Association this week began fundraising off recent Supreme Court decisions, including the abortion ruling.

In a fundraising email, the group pledged that as the court “restores the principles of freedom and federalism to our nation’s judiciary, Republican Attorneys General are holding the line against the Biden administration’s overreach.”

Republican attorneys general are already in court over several other climate-related initiatives, including the Biden administration’s use of a metric for the social cost of using carbon and efforts to strengthen tailpipe emission standards for vehicles.