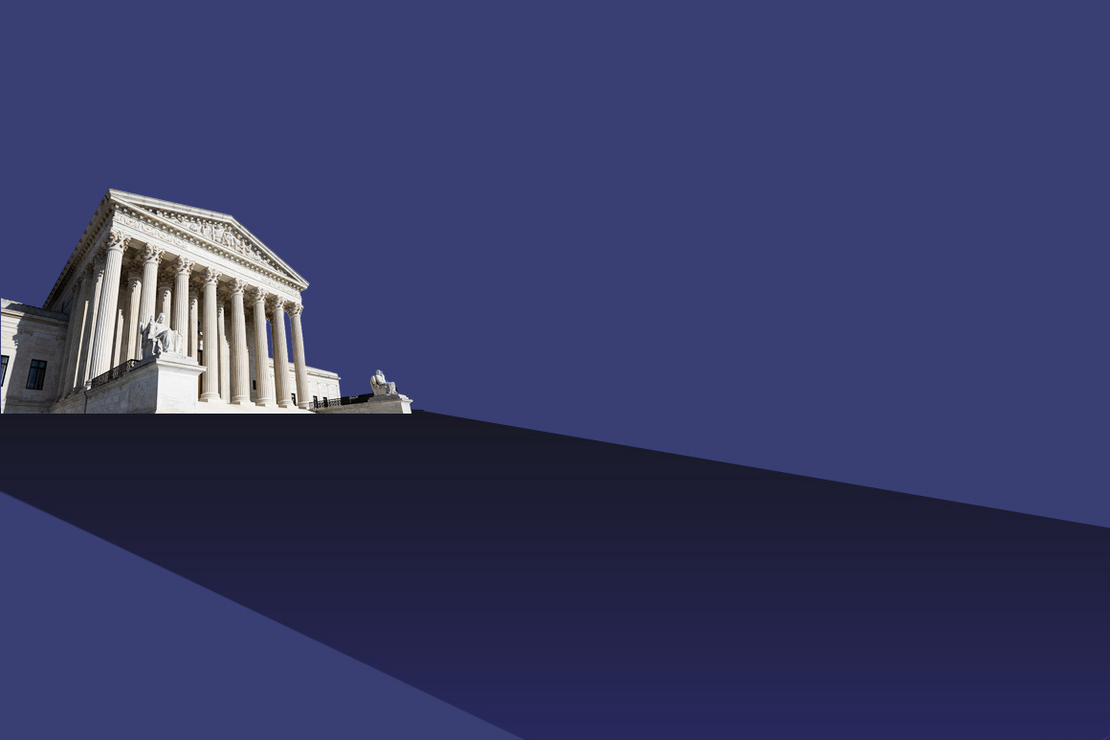 On a Tuesday evening in February 2016, the Supreme Court did something extraordinary.

Without hearing arguments or issuing a formal opinion, the nation’s highest bench stopped a signature Obama-era environmental rule dead in its tracks — over the objection of four justices.

The Supreme Court’s move was a stunning blow to EPA’s 2015 Clean Power Plan, which sought to curb carbon dioxide emissions from coal-fired power plants. At the time, the rule was subject to a challenge in the U.S. Court of Appeals for the District of Columbia Circuit, which had issued a unanimous decision just weeks earlier to keep the regulation in place during the litigation.

The D.C. Circuit never reached a decision on the Clean Power Plan, and the rule never went into effect. In 2019, the Trump administration gutted the regulation with its Affordable Clean Energy rule, which was later overturned in the D.C. Circuit.

“That was really an earthquake when it came down,” said Robert Percival, director of the environmental law program at the University of Maryland, of the Supreme Court’s Clean Power Plan stay. He added: “It really was breathtaking activism by the court.”

The stay of the Clean Power Plan — which was unprecedented at the time — marked a pivotal shift in the Supreme Court’s treatment of cases through its “shadow docket,” a term coined in 2015 by legal scholar William Baude to describe the troves of decisions that the justices make outside of their normal operating procedures.

Through a series of orders, often issued late at night and with little explanation, the Supreme Court has summarily overturned COVID-19 restrictions and paved the way for lethal injections of federal inmates, without going through the monthslong process of case briefing, oral arguments and formal opinion writing.

The justices have also employed their skyrocketing use of the shadow docket to deal some devastating legal blows to environmentalists.

“What we see in the environmental area is part of what we’re seeing more broadly with the shadow docket,” said Jonathan Adler, a law professor at Case Western Reserve University. “If the court continues to use the shadow docket aggressively and to be receptive to arguments in that context, there’s no reason why environmental issues are going to be exempt from that.”

While the court’s shadow docket is not new, the justices in recent years have departed from issuing mostly anodyne orders to greenlighting requests for major changes to the status quo.

President Trump was one driver behind the shift: During his four years in office, the federal government submitted 41 requests for emergency relief from the Supreme Court, and more than half were granted. Between 2001 and 2017, the Bush and Obama administrations submitted only eight such requests, according to data compiled by Stephen Vladeck, a professor at the University of Texas School of Law.

Vladeck has championed calls for greater transparency around the shadow docket.

Shadow docket orders are often accompanied by minimal explanations, and it’s not always clear which justices voted in favor of the court’s decision. In recent years, some orders have garnered the support of just a narrow majority of the justices, raising questions among court watchers as to whether those cases should have gotten a full-blown airing in the merits docket.

In the Clean Power Plan case, for example, four liberal justices said they would have rejected the red states’ request for a stay of the rule.

“The Clean Power Plan order was a harbinger that was largely missed at the time,” said Vladeck. He added: “That’s when this trend really seems to have taken off.”

Ducking the ‘trial of the century’

When the Supreme Court has issued shadow docket orders in favor of environmentalists, the victories have been short-lived.

Two years after the Supreme Court froze the Clean Power Plan, for example, the justices declined a request by the Trump administration to stop proceedings in the landmark kids’ climate case Juliana v. United States.

In a July 2018 order, Justice Anthony Kennedy, who was known as a moderating force over the court’s shadow docket, deemed “premature” the Trump administration’s request for relief from the kids’ claims that the federal government should curb fossil fuel use to save future generations from climate change. (The Obama and Biden administrations have also fought back against the young challengers’ claims.)

“The breadth of respondents’ claims is striking, however, and the justiciability of those claims presents substantial grounds for difference of opinion,” Kennedy wrote at the time. “The District Court should take these concerns into account in assessing the burdens of discovery and trial.”

Kennedy announced his retirement the day after the Juliana order.

“The district judge in that case, in our view, was not following the law,” said Eric Grant, who served as deputy assistant attorney general at the Justice Department’s environment division during the Trump years.

“She made up out of whole cloth a substantive due process right that no one had ever recognized and was about to put the United States through a 50-day trial,” he said.

Just days before the trial was slated to begin, Chief Justice John Roberts issued an order granting the government’s request to stop the proceedings.

The Trump administration then pressed the court to dismiss the kids’ lawsuit, but Roberts declined in a November 2018 order.

However, Roberts’ October 2018 order had already effectively killed the proceedings. The case never made it to trial, and a panel of judges for the 9th U.S. Circuit Court of Appeals last year reluctantly dismissed the young challengers’ claims, finding that climate change is a matter best left to Congress and the executive branch (Greenwire, Jan. 17, 2020).

“That really deprived the plaintiffs of what they wanted most of all, which was the trial of the century on the federal government’s role in addressing climate change,” said Percival of the University of Maryland.

The Supreme Court was swift to respond to the Trump administration’s many requests for emergency relief.

In 2019, after the Sierra Club secured a win in federal district court against Trump’s plans to fund his border wall between the United States and Mexico, the government asked the justices for an assist.

The court granted Trump’s application for a stay in the case in July 2019, finding that the government had adequately shown that the environmental group had no cause of action in its challenge against a plan to transfer Defense Department funds to pay for the border wall (Greenwire, July 29, 2019).

As in the Clean Power Plan case, four of the court’s justices said they would have rejected the Trump administration’s application. Justice Stephen Breyer said he would leave the lower court’s injunction in place to the extent that it blocks the government from disbursing the funds or starting construction.

The following year, the court rejected the Sierra Club’s motion to lift the stay after the environmental group again won its case again on appeal in the 9th Circuit. Breyer once again joined his three liberal colleagues in the dissent.

“Now, the Government has apparently finalized its contracts, avoiding the irreparable harm it claimed in first seeking a stay,” Breyer wrote in an opinion accompanying the court’s order. “The Court’s decision to let construction continue nevertheless, I fear, may ‘operat[e], in effect, as a final judgment.’”

The Supreme Court had been poised to hear oral argument in the border wall funding dispute but dismissed the case after President Biden took office and announced a pause on the project.

The justices also stepped in when the Trump administration asked them to reverse a federal district court’s freeze on the Army Corps of Engineers’ streamlined water permit for oil and gas pipelines, including the Keystone XL oil project that Trump had been trying to revive.

The Supreme Court reinstated the agency’s nationwide permit 12 but allowed the injunction to remain in place for Keystone XL. The Biden administration later scrapped another key permit for the pipeline, leading developer TC Energy Corp. to cancel the project.

But the Supreme Court’s 2020 order avoided setbacks for other oil and gas pipelines that rely on the streamlined authorization for dredge-and-fill activities along their routes (Energywire, July 7).

Vladeck of the University of Texas said one reason the Trump administration went to the Supreme Court so often could be that it saw the bench as ideologically aligned with its pro-energy agenda.

It’s also possible, Vladeck said, that Trump felt he needed to go to the justices more often because so many of his administration’s policies were blocked in lower courts.

“There’s both a numerator and a denominator problem,” Vladeck said. “That’s consistent with a lot of what we saw at the Obama administration, where some of the most important decisions were decisions where the administration was not seeking relief but was opposing it.”

Future of the ‘shadow docket’

The Biden administration doesn’t appear to view the solidly conservative Supreme Court as an option for securing fast action on federal environmental policies.

After coming down on the losing side in one court ruling that stopped the Biden team’s pause on federal oil and gas leasing, the administration chose to bring the matter to the notoriously conservative 5th U.S. Circuit Court of Appeals rather than ask Supreme Court justices for emergency relief (Energywire, Aug. 17).

“I’m sure the Trump administration would have gone running to the Supreme Court,” said Percival of the University of Maryland.

The Biden administration could eventually make a bid for emergency assistance from the high court if a lower bench issues a nationwide injunction against the right environmental policy, said Adler of Case Western University.

Conservative justices have railed against broad orders from federal district courts that have been used to freeze major policies by both Republican and Democratic administrations. DOJ officials during the Trump administration said they were seeking the right case to get the high court to address nationwide injunctions (E&E News PM, Jan. 27, 2020).

“It’s certainly clear that the Biden administration would not expect a conservative Supreme Court to be sympathetic to their point of view,” Adler said, “but it depends on the details.”

Republican states and the energy industry still appear to see the Supreme Court as friendly territory and may eventually press the justices for an emergency reprieve from the Biden administration’s expected Clean Power Plan replacement, Adler said.

Coal companies and red states have petitioned the Supreme Court to overturn the D.C. Circuit’s ruling this year that axed the Trump administration’s rule rescinding and replacing the Clean Power Plan.

“I see the cert petitions serving the dual purpose of waving a red flag to the court that it has to pay attention,” Adler said. “Otherwise, EPA might be trying to utilize unfair regulatory leverage with the new rule.”

The justices will reach a decision on the petitions when they reconvene in October.