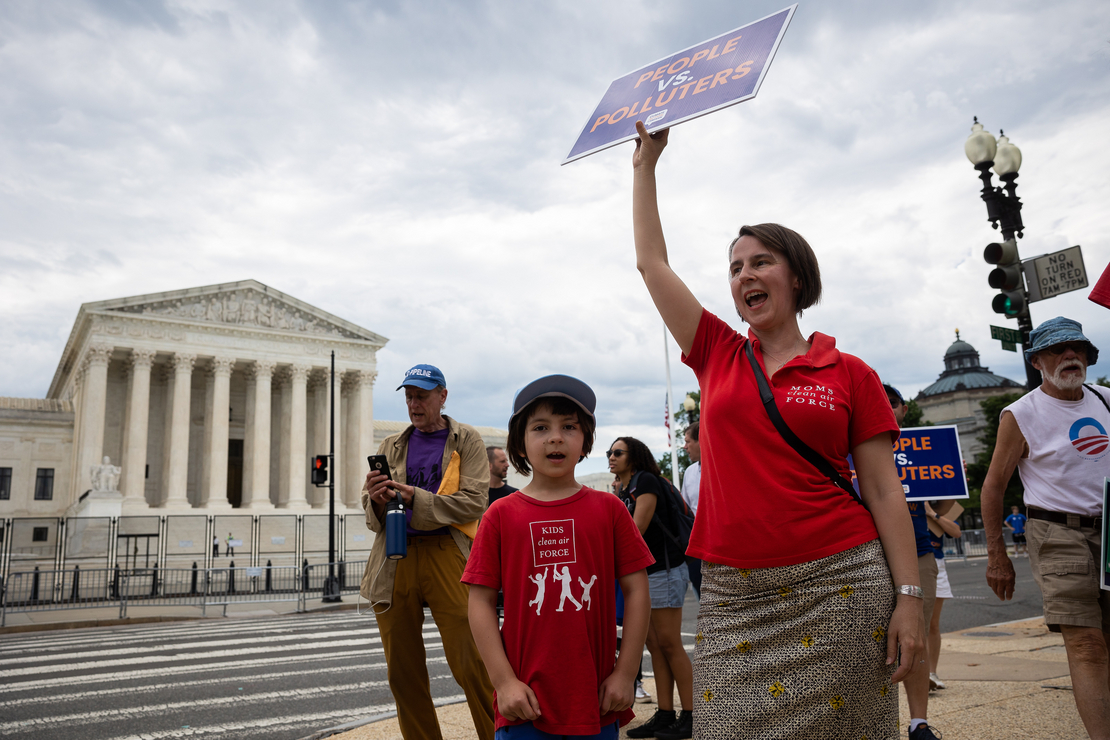 Climate activists erect a giant mock-up of the U.S. Constitution, with a preamble reading "We the Corporations," outside the Supreme Court after the court announced its decision in West Virginia v. EPA on June 30. Francis Chung/E&E News/POLITICO

Legal observers said that they’re bracing for what rights and regulations the court — powered by a newly emboldened six-justice conservative majority — might take on next.

“I’m so struck by the aggressiveness and recklessness of the Supreme Court today, that they have taken a lot of settled regimes and broken them, and they don’t seem to care,” said Georgetown University law professor Lisa Heinzerling.

“The chaos and the human harm coming from their decision in Dobbs is terrible, and they don’t seem to mind,” she continued, referring to the court’s decision last month to overturn its landmark 1973 abortion ruling Roe v. Wade. “That, I guess, I would apply to the government too. I think they’re breaking it.”

The majority in the 6-3 ruling applied the newly contoured major questions doctrine — which says Congress must speak clearly to authorize agency action on matters of “vast economic and political significance” — to strike down the Obama administration’s Clean Power Plan, even though it is not currently in effect and the utility sector had already achieved its goals (Greenwire, June 30).

“Unless Congress is hyper-specific,” Duffy continued, “this Court seems bent on limiting agencies’ discretion when they take measures to protect public health, safety and the environment, under long-standing statutory provisions.”

For those who view “the democratic legitimacy of the contemporary Congress as hopelessly compromised,” the Supreme Court’s application of the major questions doctrine comes as a blow, wrote Philip Wallach, senior fellow at the American Enterprise Institute, in an analysis for the Brookings Institution.

“For those of us who believe that the renewed exertions of our legislators are the only means capable of securing policy legitimacy and stability, the majority’s view represents a fitting commitment to Constitutional self-government,” Wallach wrote.

Paul Seby, a shareholder at the firm Greenberg Traurig who represented North Dakota as a challenger in the West Virginia case, said the ruling “takes the heavy hand of government off the market.”

The Clean Power Plan, Seby said, allowed EPA to improperly reach into states’ decisionmaking role. He added that industry’s ability to meet the Clean Power Plan’s goals in the absence of the rule demonstrates that the regulation was not necessary.

“The market can function that way,” he said. “People’s demand went in that direction, and that’s the way it should work.”

While West Virginia was not the only environmental fight of the term, it cast a long shadow over the other cases decided this year.

Other environmental cases this term included an interstate groundwater battle between Mississippi and Tennessee (Greenwire, Nov. 22, 2021). The justices also considered, and rejected, a Washington state law that expanded benefits access to contractors who had fallen ill after exposures at the Hanford nuclear site (Energywire, June 22).

The Supreme Court also scaled back its landmark 2020 ruling in McGirt v. Oklahoma, which recognized nearly half of the Sooner State as Indian Country — although the decision did not affect a transition from state to federal coal oversight on the newly recognized reservation lands (Energywire, June 30).

Some of the court’s non-environmental cases this term also appeared to pack a punch for agency oversight of the nation’s air and waters: Last month’s ruling in the Dobbs v. Jackson Women’s Health Organization abortion case left lawyers wondering what other major legal precedents may be on the chopping block.

One fear among some environmental lawyers is that the court could eventually be persuaded to overturn its 5-4 ruling in the 2007 case Massachusetts v. EPA, which recognized the federal government’s authority to regulate greenhouse gas emissions under the Clean Air Act. Others differentiated between cases like Dobbs, which dealt with constitutional questions, and Massachusetts, which focused on a narrower statutory issue (Greenwire, June 24).

In an expedited ruling striking down the Biden administration’s Covid-19 vaccine-or-test requirement for large employers, the justices began to give shape to the major questions doctrine and started to wield it against federal mandates they viewed as overly broad (Greenwire, Jan. 14).

And in American Hospital Association v. Becerra, a complicated case concerning Medicare drug reimbursements, the justices declined an opportunity to officially ax the Chevron doctrine, an administrative law principle that says courts should give federal agencies like EPA leeway to interpret ambiguous statutes like the Clean Air Act.

In fact, they did not even mention the doctrine (Greenwire, June 15).

“Given the complexity of regulatory statutes, if a court adopts the view that any reasonable agency interpretation that is not ‘directly foreclosed’ by the statute will be upheld, the dice are loaded in the agency’s favor,” Adler wrote.

“If, on the other hand,” he continued, “the Court first looks directly at the statute, and utilizes all of the traditional tools of statutory interpretation to determine whether the statute answers the question, agencies will prevail less often, as they will never get the opportunity to present their position as a ‘reasonable’ interpretation of the statute.”

But some court watchers said the justices may be allowing Chevron to die a slow, quiet death.

Georgetown’s Heinzerling noted that the four dissenting justices in Massachusetts said they would have deferred to EPA on the question of whether to regulate greenhouse gases.

However, she said, the six-justice majority in West Virginia, which included three of the Massachusetts dissenters, never mentioned Chevron doctrine in their decision to limit EPA’s ability to control one of the nation’s leading emissions sources.

“Chevron is well and truly dead in my view,” she said.

The Supreme Court this term continued to use its emergency — or “shadow” — docket to call the shots on major policy issues.

In recent years, the court has faced criticism for using emergency orders that sometimes come late at night and without explanation to make significant policy changes, instead of for more mundane matters. The Supreme Court’s stay of the Clean Power Plan in 2016 was the marker of that transformation (Greenwire, Aug. 24, 2021).

While the Covid-19 shot-or-test case that the court decided earlier this year was not technically a shadow docket case, the justices did move through the matter on an expedited basis.

The justices also chose to revive a Trump-era rule, which had been struck down by a lower bench, that curbed the role of states and tribes in Clean Water Act certifications for federally approved projects like pipelines and dams.

Four justices — including Chief Justice John Roberts, a member of the court’s conservative wing — dissented and admonished their colleagues in the majority for abusing the emergency docket (Greenwire, April 6).

But the justices declined to resurrect a federal judge’s order this year that blocked the Biden administration from using its social cost of greenhouse gases metric, a key tool for estimating the benefits of regulations that curb planet-warming emissions (Climatewire, May 27).

That case could eventually reach the justices on the merits.

The first — Sackett v. EPA, which is scheduled for argument Oct. 3 — has the potential to narrow the scope of Clean Water Act jurisdiction.

Chantell and Michael Sackett have been slugging it out in the courts for nearly 20 years for the ability to build on their Idaho land without an EPA permit. They have asked the Supreme Court to find that the lower courts should have applied a more restrictive test for determining whether EPA has jurisdiction over their land — and some legal observers say the conservative-dominated court — may give them the votes to do so (Greenwire, June 22).

Later in October, the justices will hear arguments in a challenge to a California pork production law — a case with implications for interstate commerce and state climate mandates — and an offshore worker overtime dispute (Greenwire, June 14).

The justices could choose to add more environmental cases to the docket, including the next phase of a jurisdictional battle that has stymied state and local lawsuits seeking oil and gas industry compensation for climate impacts (Climatewire, June 9).

Legal observers say they will also keep a close eye on the lower courts in the coming months to see how widely they apply the major questions doctrine in the wake of West Virginia — including in the social cost of greenhouse gases litigation, which is currently making its way through the 5th U.S. Circuit Court of Appeals.

“That’s the power and the concern with major questions,” said Heinzerling. “Any case can turn into a major case.”