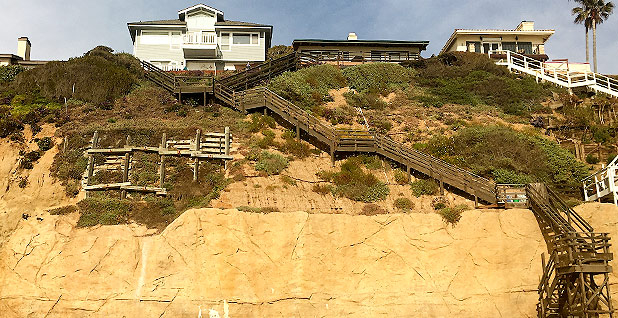 The California Supreme Court will decide whether the state can place limits on this Encinitas beach house sea wall. Photo special to E&E News.

ENCINITAS, Calif. — Barbara Lynch once saw her home on a coastal bluff here as a dream retirement sanctuary, a place to gaze at a panoramic view of the Pacific Ocean and gather with grandchildren. Then, in late 2010, a series of severe storms savaged the region.

The hillside beneath Lynch’s home partly collapsed. A wooden wall erected at the base toppled over. An engineer deemed the 80-foot-high bluff in danger of further structural failure.

Now the modest, two-story brown house bedecked with brightly colored flowers — and the one next door — sits at the center of a California Supreme Court case likely to set a statewide precedent on homeowners’ rights to erect sea walls and the state’s ability to police those structures.

The California Coastal Commission in 2011 granted a permit for a replacement sea wall but put a 20-year duration on it. The Lynch family and next-door neighbors Thomas and Marian Frick must obtain authorization for a new permit in 2031. The homeowners said that amounted to a financial taking of their property. The state Supreme Court will hear arguments in the lawsuit Thursday.

It’s the first case to reach the high court that looks at a key climate change issue. It pits the rights of homeowners to protect their property from sea-level rise against the state’s desire to constrain sea walls, in order to preserve beaches for all residents. Concrete structures contribute to sand loss, experts said.

Barbara Lynch died in 2016. Her adult children now are advancing the case. Before her death, Lynch appeared in a video made by the Pacific Legal Foundation, which now represents the homeowners. She talked of her love for the home and lamented the Coastal Commission’s action.

"The bluff was our property to keep up. It was our responsibility," she said. "All of a sudden, it’s [the Coastal Commission’s], which is a little hard to understand, why they can just take that property and say what they can do with it or what we are allowed to do with it."

The Coastal Commission said it needs to protect the beach. While not specifically talking about the Lynch-Frick case, Madeline Cavalieri, coastal planner at the agency, said Californians cherish state beaches and want to keep them healthy. The commission has jurisdiction over most development in 15 counties along 1,100 miles of coastline.

Sea walls and similar protections take up space where visitors otherwise could sit. They also stop the beach from moving landward as the shoreline erodes, she said.

"As the sea level rises, the erosion, the inland migration of the shoreline, is going to increase a lot more," Cavalieri said. When shoreline protection is fixed in a location, "the beach becomes inundated more and more by water, to the point where eventually it will be lost completely, narrowed until it’s eliminated."

“My hunch is this case, depending on how broadly or how narrowly it’s written, and regardless of which way it goes, could have significant influence in other states as well, not just in California.”

If the court rules for the homeowners, "it would not bode well for future efforts by California governments at the state and local level to try and plan, and act proactively, to keep their options open to assess the future impacts of sea-level rise and storm surges along the coast," said Rick Frank, director of the California Environmental Law and Policy Center at the University of California, Davis.

Should the court side with the state, he said, it will give planning agencies some security that "it’s permissible to make their permitting decisions and make their land-use planning decisions with a firm eye on climate change" and its future impacts.

The Supreme Court hearing comes as a number of lawsuits on sea walls move through lower courts in California, said Deborah Sivas, a professor of environmental law at Stanford University. There is notable beach erosion in places like northern San Diego County, and homeowners, green groups and cities are fighting over rules.

It also could cause ripples beyond California, Frank said. Other states similarly are grappling with how to deal with climate change and property rights, he said.

"My hunch is this case, depending on how broadly or how narrowly it’s written, and regardless of which way it goes, could have significant influence in other states, as well, not just in California," Frank said.

If the high court sides with the state, the families could appeal to the U.S. Supreme Court, arguing that it’s an unconstitutional taking of private property, Sivas said. She wrote a friend-of-the-court brief in the case for the Surfrider Foundation, which supports the Coastal Commission’s ability to police sea walls.

The case has three components. The first is procedural. The Coastal Commission in its decision put the 20-year limit on the wall and required that Barbara Lynch and Thomas Frick record that condition with the county, as part of deeds tied to the homes. The families did so. As a result, the state argues that they accepted the terms. There was no option for accepting the authorization under protest, the state argues in court filings.

There’s a chance that the state Supreme Court could just address that component, Sivas said. If that happened, the case’s ruling would likely have no impact on sea walls.

The other two parts of the case focus on a request to replace stairs to the beach destroyed by the storms and on the reach of the California Coastal Act, an expansive protection law. A major goal of that law is to protect the beach for all residents, a state filing in the case said.

"The Legislature adopted the Coastal Act to ‘protect, maintain and where feasible restore the overall quality of the coastal zone environment and its natural and artificial resources" and to "[m]aximize public access to and along the coast," the state told the Supreme Court. It’s to be done "consistent with sound resources conservation principles and constitutionally protected rights of private property owners."

In the Lynch-Frick lawsuit, the state argues the Coastal Commission has the purview to look at the appropriateness of a sea wall in 20 years, given how much the beach could transform in that time with climate change.

The Coastal Act mostly prohibits sea walls for homes built after the passage of that law in 1976. Houses built before that were grandfathered in. But if homeowners make revisions beyond half the home’s value, it’s then considered new and then would not qualify for a sea wall.

The Coastal Commission right now isn’t using the 20-year limit imposed in the Lynch-Frick case. Instead, for grandfathered-in homes that qualify, it’s allowing sea walls based on the economic life of the property protected. That’s generally considered 75 years. If there are home changes of more than 50 percent of the value, however, in general it must be built without a sea wall.

John Groen, an attorney for the families, said, "The right to protect your property, it’s protected by the California Constitution; it’s also protected by the [California] Coastal Act." Groen works for the Pacific Legal Foundation.

Putting a 20-year permit on the sea wall "really reaches too far," Groen said. "It converts what’s allowed under the Coastal Act as a permanent structure and turns it into a temporary structure."

Expecting homeowners to reapply for a sea wall after 20 years isn’t reasonable given their expense, said Jennifer Lynch, daughter of Barbara and Jack Lynch, who died in 2001. The sea wall, including analyses, permitting and construction, cost about $500,000. Including attorneys’ fees, the family has spent more than $1 million on the case, she said.

"It costs a fortune to go through this process," Jennifer Lynch said. "That was extremely stressful for my mother; she went through most of her assets. She also was literally afraid for quite a while" that "the house might fall into the ocean. She couldn’t sleep well" and suffered mini-strokes.

The Coastal Commission, Jennifer Lynch said, is seeking "managed retreat," or having the bluffs moved backward naturally as the sea rises. If the state decided to use its power of eminent domain, or seizing the land for the public good, it would have to pay for coastal homes. But it can’t afford to do that, she said.

"Eminent domain means you get a hearing and you get compensation," Jennifer Lynch said. She said the commission instead wants "to let things fall into the ocean and not let properties be protected by owners."

The Lynch family argues erosion of the beach isn’t simply caused by sea-level rise or sea walls. Construction of a pier to the north in the city of Oceanside has resulted in less sand, they said. Inland infrastructure also has lessened sand flow into coastal lagoons and river mouths, Jennifer Lynch said.

Jack Lynch bought the house in 1970, paying $88,000, Jennifer Lynch said. The family lived in San Bernardino, to the east of San Diego, and her father worked as a surgeon. They rented out the house for income. He planned to live in it after retiring.

The house caught fire in 1984. When rebuilding, Jack Lynch needed money and sold half the lot to the Fricks. They designed and built their house next door in 1991. They planned to live there for the rest of their lives, Marian Frick said. While they’re still in the home, the court battles have caused great stress, Frick said. She fears they’ll have to remove the sea wall in 2031.

"It devalues the property also because it’s hanging over everyone’s heads," Frick said.

Of the two homes in the court case, the Lynch home is most at risk. The Fricks, because they built their home after the rules changed, had to install caissons down to the bedrock. They weren’t allowed a sea wall until after the 2010 storms, when it was determined the homes were in danger.

The homeowners argue they were hurt by bureaucratic delays when they sought to update their protection. Before those storms, the homes had a 100-foot-wide wooden wall in front of the bluff and a wooden wall in the middle section. They asked the city of Encinitas in 2003 for permission to replace the walls and part of the shared stairway with a concrete sea wall system. Encinitas approved it in 2009. It then went to the California Coastal Commission.

While the application was pending there, the powerful storms hit. The homeowners then asked to build a new 100-foot concrete structure beneath both homes, with an additional 75 feet of protection below the Lynches’ house. They sought to replace the lower part of the stairs that had been destroyed.

The commission after extensive back-and-forth allowed the sea wall with the 20-year cap on it, plus the requirement for recording the deed restrictions. The families put up the wall and stairs after the agency’s decision.

"We objected to some of the conditions, but the wall was necessary for the safety of the residence," Jennifer Lynch said.

Angela Howe, legal director at the Surfrider Foundation, said the state must respond to the effects of climate change.

"Sea-level rise is happening. We have to do a better job managing our coastline," Howe said. "The Coastal Commission is trying to do that by merely taking a second look at these sea walls in 20 years when the shoreline will have surely changed."

Howe, who lives near the beach, added that "I feel for these people" facing sea-level rise. But, she said, in terms of a Coastal Commission decision forcing homeowners to repeatedly fight for sea walls, "that’s the rub. Living in this dynamic area along the coast does have some liabilities and some risks."