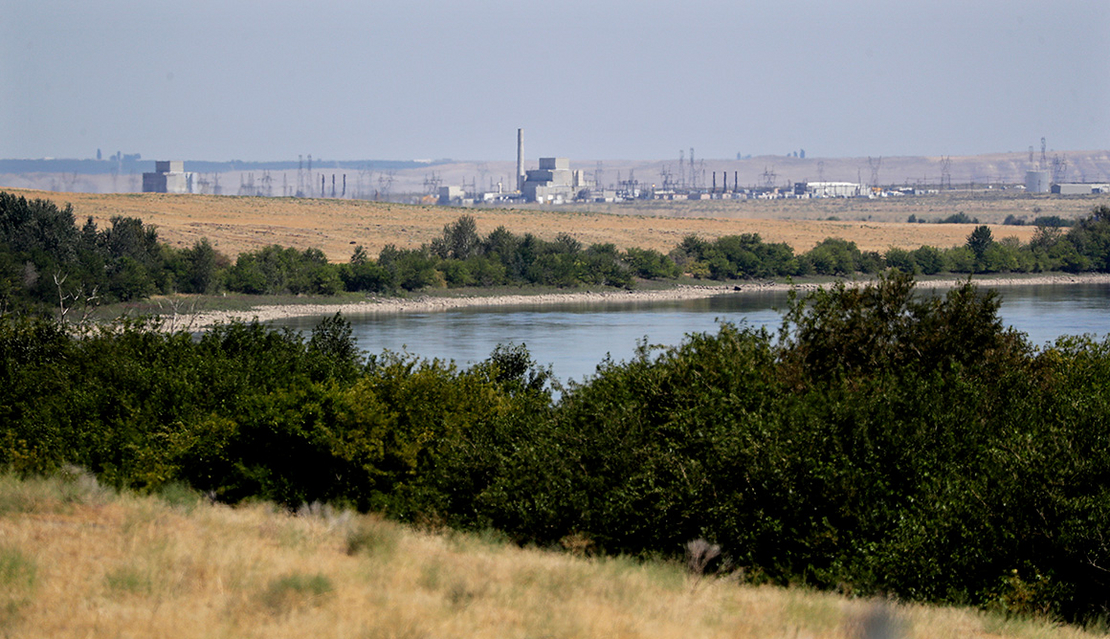 In this 2019 photo, buildings on the Hanford Site along the Columbia River are seen from a location near Richland, Wash. AP Photo/Elaine Thompson, File

The federal government is seeking to block a 2018 state law that presumed current and former workers who developed certain illnesses after working at the decommissioned Hanford Site were eligible for compensation (Energywire, March 22).

In oral arguments yesterday in United States v. Washington, the justices’ questions centered on whether the high court could consider the substance of the case at all.

The high court has rigorous standards to “moot out” a case, said Chief Justice John Roberts.

“I don’t want to suggest that the Legislature is engaging in some kind of a gambit,” Roberts said. “Maybe it was a sincere effort to make our workload better, but the case is not totally out of any significance at all, I don’t think.”

At issue in the case is Washington’s H.B. 1723, which was recently replaced by S.B. 5890, a broader law that expanded access to benefits to federal contract workers at other federal nuclear waste sites in the state. The second law was signed by the governor after the justices had already agreed to hear the challenge to H.B. 1723.

Justice Clarence Thomas kicked off questioning yesterday by asking what financial interests the Biden administration still has now that the new state law is on the books.

“We think there is at least an open question whether some of the workers would be covered,” said U.S. Deputy Solicitor General Malcolm Stewart.

Supreme Court precedent says that a case is not moot if there is still a “reasonable possibility” that the federal government could benefit from a ruling, he said.

The high court also has an interest in deciding the case to dissuade other parties from using “post certiorari maneuvers” to prompt the justices to dismiss a petition after it had been accepted, Stewart said.

Washington state’s Deputy Solicitor General Tera Heintz said that the state Legislature had been acting in good faith to address concerns about H.B. 1723. The timing of the law’s passage after the Supreme Court granted the case was due to the part-time nature of the legislative body — not an effort to avoid judicial scrutiny, she said.

The case before the court is moot because H.B. 1723 is no longer in effect, she said, adding that S.B. 5890 applies retroactively to claims filed under the earlier law.

“The government speculates there may be individuals who would not be covered under the revised statutes,” Heintz said. “But if that was true, those claims would now be rejected. It will have absolutely no effect on any worker’s right to benefits or the government’s finances.”

There are currently 66 claims made under H.B. 1723 that are now being appealed by the federal government. The state says they would fall under the new law, and the Biden administration says there may be some instances where there’s a gap and workers are not covered.

The two laws are “co-extensive,” providing the same coverage to workers, Heintz said.

If a court did find that there were gaps in eligibility, that would have to be worked out in the context of each of the 66 awarded claims that are currently pending on appeal, Heintz added. Another 140 claims are already closed and could not be reopened to reassess eligibility under the new law, Heintz said.

But the resolution of those cases might not be so clear cut as the Biden administration is suggesting, said Justice Stephen Breyer.

He pointed out that H.B. 1723 had defined its scope to a geographical area covering hundreds of miles, while the new law applies to workers at any structure and its lands. Breyer proposed a hypothetical where workers at Hanford were tasked with clearing out muskrat nests in a river at the site.

“They are nowhere near a structure where particular forms of waste are disposed of, except by the muskrats,” he said.

He asked what would happen to the benefits for those workers, where there isn’t likely to be a specific law that applies to them.

“Now that’s my problem with your argument,” Breyer said to Heintz. “And if it’s a real problem, well, then, I can’t really say it’s moot,”

Thomas asked if the state’s mootness claim would be stronger if Washington state Supreme Court had found that the new law — S.B. 5890 — would be applied retroactively to the claims that are still pending under the earlier law.

Heintz agreed that such a finding would help her case.

“But what we’re asking this court to acknowledge is settled principles of Washington and federal law that when a statute is retroactive … then courts have an obligation to the legislature or Congress to honor that retroactive intent,” she said.

Washington has maintained that updating benefits for contract workers at Hanford in particular was necessary because of the exposure risks they faced from radiation and toxic chemicals that could be hard to sufficiently document in order to be eligible for benefits under the state’s prior system.

The justices wrestled with whether a nearly century-old waiver of federal immunity from Congress allowed Washington state to craft a law requiring the federal government to provide that compensation.

The waiver authorizes a state to use the same compensation laws that apply in other workplaces to federal facilities, said Stewart, the attorney for the Biden administration.

“We went for 80 years after this statute was enacted before any state has read it to target federal facilities as Washington has done here,” said Stewart.

But that argument did not appear to convince Roberts, who noted the uniquely hazardous nature of work at Hanford.

“There aren’t many places like Hanford,” he said. “Are there analogous places in the rest of the country where workers might be concerned about the workers’ compensation regime?”

Stewart said he didn’t know of any.

Justice Elena Kagan told Stewart he had very strong arguments about how the implications of the state’s reading of its authority to act would “stretch very broadly … and maybe just seems like not the kind of thing that Congress would do.”

“But, if you look at the text here, I mean, I’m sort of struggling to read it your way,” Kagan said, “It just says, if the state were in charge, could the state do it, and, obviously, the state could.”

Justice Sonia Sotomayor also noted that while a federal waiver of immunity existed, “there is some ambiguity as to what the extent of that waiver is.”

Justice Amy Coney Barrett asked whether the intent of the state legislation mattered in this case or if it was a question of “identifying the relative categories of risk” — for example, between desk workers or firefighters and miners.

Part of the question before the court, Stewart replied, is to determine whether the state had “singled out a particular group of workers because they were federal contract workers or was it because it was concerned about the dangers faced by these populations.”

Barrett asked if state was limited by whether there was an already existing body of workers’ compensation law.

Washington state could update its laws, but it would have to do so on an even-handed basis, said Stewart.

“The problem here is Washington has decided that the U.S should be doing more for this class of residents,” he said, “but it is not within the power of the state.”