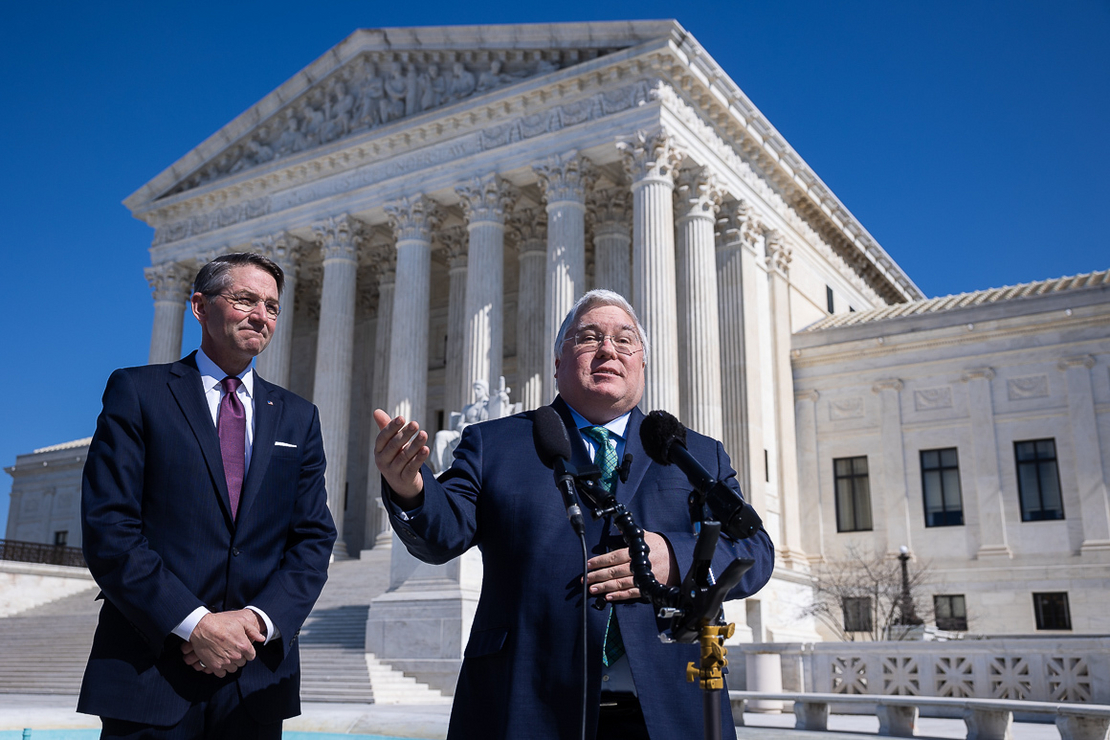 The Supreme Court’s conservative wing today explored whether it could use a key doctrine to block EPA from broadly regulating emissions from a leading source of greenhouse gas emissions.

During arguments today in West Virginia v. EPA, Republican-led states said an EPA rule like the Clean Power Plan — which established a systemwide plan for reducing emissions from existing power plants, including shifts away from coal-fired generation — is prohibited under the major questions doctrine, which prevents the courts from upholding federal rules that address issues of “major economic or political significance.”

“This is a major question because it allows EPA to determine what the power sector as a whole should look like and who can be it,” said West Virginia Solicitor General Lindsay See, who argued on behalf of a coalition of Republican-led states today.

Some legal observers said the arguments left them concerned that the Supreme Court would limit EPA to facility-level improvements, like the Trump-era Affordable Clean Energy rule, which gutted the Clean Power Plan.

“In the course of their questioning, [conservative justices] seemed to be suggesting that anything EPA does that might incentivize a shift away from fossil fuels would be such a ‘novel’ and ‘transformational’ use of the agency’s authority,” wrote Loyola University law professor Karen Sokol in an email.

Other court watchers said they saw some wiggle room for the Biden administration’s EPA in the lines of questioning from some members of the court’s conservative wing, such as Justices Clarence Thomas and Amy Coney Barrett.

At one point in this morning’s arguments, Barrett noted that the major questions doctrine appears to require a “mismatch” between an agency and its expertise, and highlighted a recent Supreme Court decision stopping the Centers for Disease Control and Prevention from issuing an eviction moratorium during the Covid-19 pandemic.

Under Supreme Court precedent in the 2007 case Massachusetts v. EPA, however, the agency has authority to regulate greenhouse gas emissions under the Clean Air Act.

“Here, Justice Barrett noted that there is a match between regulating greenhouse gases and that being something within EPA’s wheelhouse,” wrote McGuire Woods LLP partner Allison Wood in an email. “This may mean that the major questions doctrine does not have universal support among the conservative members of the Court.”

West Virginia is an unusual case in that it deals with a regulation that does not currently exist. The case stems from a decision last year by the U.S. Court of Appeals for the District of Columbia Circuit, which struck down the Trump administration’s Affordable Clean Energy rule and upheld EPA’s authority to issue a regulation like the Clean Power Plan — although it did not revive the rule.

The Biden administration has said it plans to craft a brand new rule and has no plans to return to the Obama-era Clean Power Plan, a regulation that never officially took effect and whose targets the power sector has met more than a decade early.

Lawyers for investor-owned utilities, which would be subject to EPA’s regulation, told the court to uphold the agency’s authority.

Solicitor General Elizabeth Prelogar said to the justices this morning that the case is not ripe for their review.

“No federal regulation will occur until EPA completes its forthcoming rulemaking,” she said, adding that the challenge from coal companies and Republican-led states is “wrong on the merits in any event.”

West Virginia Attorney General Patrick Morrisey (R) said during a news conference after arguments that he was “encouraged on how the argument went on standing,” as Chief Justice John Roberts, one of the court’s potential swing votes, appeared to think that the red states and coal firms had a ripe argument.

Case Western Reserve University law professor Jonathan Adler wrote in a blog post that he expected the justices to rule in favor of West Viriginia and the other challengers.

“But there is some reason to believe this case will produce a narrower opinion than some had thought,” he wrote.

The justices are expected to hand down their ruling by early summer.