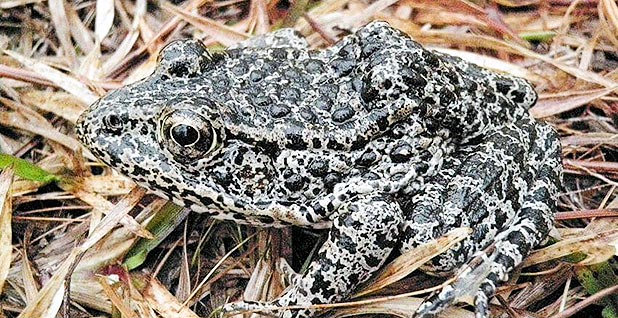 The Supreme Court today grappled with a high-stakes debate over the reach of the Endangered Species Act.

The court’s liberal wing appeared skeptical of arguments to curtail the government’s ability to designate critical habitat for the dusky gopher frog, a warty amphibian whose numbers have dwindled over the years.

But justices from both ends of the ideological spectrum pushed to understand just where the limits are on the government’s authority.

Justice Stephen Breyer, a Clinton appointee, and Chief Justice John Roberts, a George W. Bush appointee, both asked the Fish and Wildlife Service to explain the limits on its power to protect habitat.

The dispute, which formally kicks off the court’s new term today, is the biggest environmental case on the agenda this year.

The case pits Weyerhaeuser Co. and its Louisiana timber operations against the Fish and Wildlife Service and its effort to protect the dusky gopher frog.

The sticking point: The service included 1,500 acres of private land in its critical habitat designation for the creature, even though the frog does not currently live there, and it’s disputed whether the land would need minor or major tweaks to support the frog now.

Justice Elena Kagan, an Obama appointee, appeared sympathetic to FWS, saying it would be "counterintuitive" if the law would prefer extinction over authorizing protections for lands that could serve as a suitable home with "reasonable changes."

"This is not a choice between the frog surviving and not surviving," he told the justices.

FWS listed the dusky gopher frog as endangered in 2001 and then worked to protect its habitat, including where the frog currently lives in Mississippi, plus other suitable spots throughout its historical range in the South.

That included Unit 1, a 1,500-acre swath of private land in Louisiana with the types of isolated ephemeral ponds deemed ideal for the frog.

The ESA allows the agency to designate critical habitat on land unoccupied by the species if those areas are considered essential to the animal’s conservation.

But Louisiana landowners and Weyerhaeuser say FWS went too far because Unit 1, in fact, is not even habitable for the frog unless upland areas by the ponds are restored.

"This property is not just not optimal," Bishop said. "It’s not habitat."

Justice Neil Gorsuch, a Trump appointee, stressed that the agency has authority to undertake other efforts to recover the dusky gopher frog.

He pushed Deputy Solicitor General Edwin Kneedler to explain why a critical habitat designation on Unit 1 is considered the only way to conserve the frog — especially given Weyerhaeuser’s assertion that it will not offer the required consent for the government to undertake frog habitat restoration efforts on Unit 1.

Kneedler replied that the ESA focuses on long-term recovery efforts and does not require land to be immediately able to sustain the species it’s designated to support.

Another Clinton appointee, Justice Ruth Bader Ginsburg, meanwhile, questioned whether the case was even ripe for review. She noted that landowners whose property is included in a critical habitat designation do not have to take any action unless and until they seek a federal permit for some type of new development in the area.

Bishop responded that the property owners have suffered an immediate loss of value and that the designation complicates their consideration of redeveloping the area for something other than the current timber operations that occur there.

The morning’s arguments came before an eight-justice bench as controversy continues over the nomination of Brett Kavanaugh to the Supreme Court. Environmentalists had viewed Kavanaugh as likely to side with Weyerhaeuser. Without him on the court, the case’s outcome is more uncertain. If the justices split 4-4, they could uphold lower court rulings favoring FWS, or they could opt to rehear the case once a ninth justice is seated.