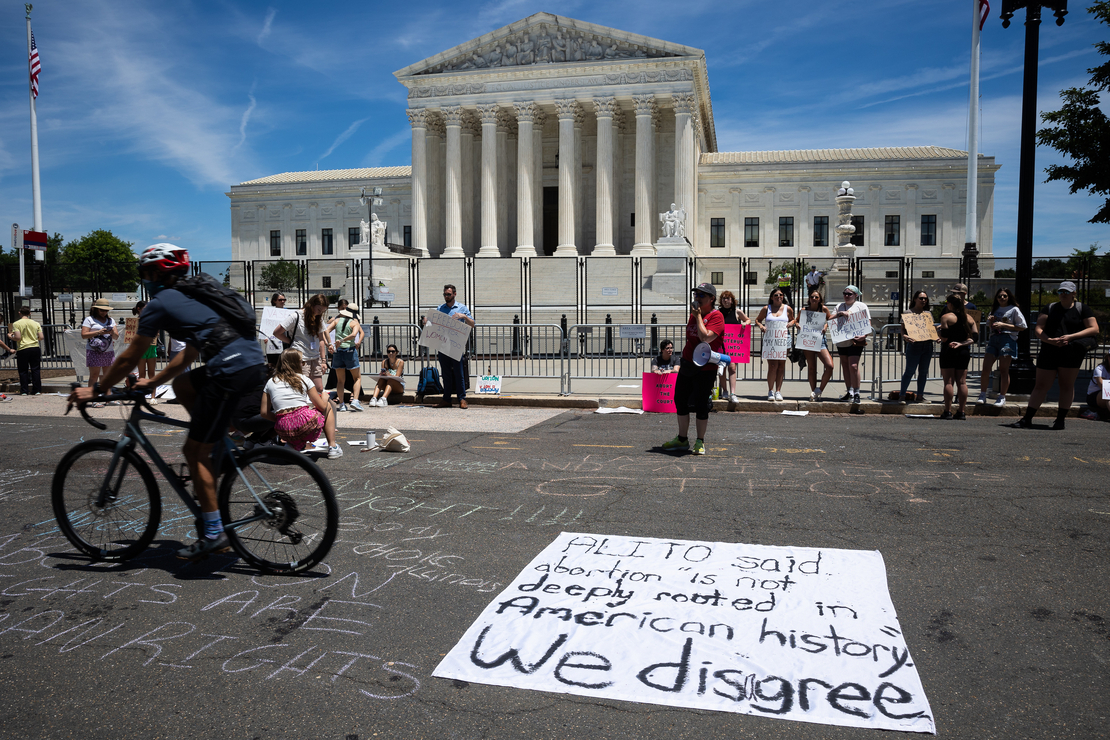 Abortion-rights advocates protest outside the U.S. Supreme Court yesterday as demonstrations continued in the wake of the court's June 24 decision to overturn Roe v. Wade. Final decisions for the term are expected tomorrow. Francis Chung/E&E News/POLITICO

The Supreme Court tomorrow is expected to hand down its biggest climate ruling since Massachusetts v. EPA.

In their forthcoming decision in West Virginia v. EPA, the justices could affirm broad agency authority to regulate planet-warming emissions from power plants. Or they could cut back on the scope of rulemaking power at EPA — and possibly all federal agencies. The justices could also choose not to decide the case at all.

“This Court will announce all remaining opinions ready during this Term of Court on Thursday, June 30, 2022, beginning at 10 a.m.,” Supreme Court spokesperson Patricia McCabe said in a statement this morning.

West Virginia is one of two remaining cases that were argued this term but have yet to be decided.

Republican-led states and coal companies brought the case to the Supreme Court last year after the U.S. Court of Appeals for the District of Columbia Circuit struck down the Trump-era rule that effectively gutted the Obama administration’s Clean Power Plan.

The utility sector had already met the Clean Power Plan’s goals — a 32 percent reduction of carbon pollution from 2005 levels by 2030 — a decade early, even though the Obama rule never officially took effect. The Biden administration’s EPA said it planned to write a fresh regulation, which is expected by 2024, and asked the Supreme Court to hold off on getting involved.

Against the odds, the Supreme Court, which rejects most petitions, decided to hear the case, which asks the justices to review rules that are not currently in effect.

Some challengers in the Supreme Court case have asked the justices to go big with their ruling by reviving the long-dormant nondelegation doctrine to say that Congress cannot hand off its legislative powers to federal agencies like EPA (Climatewire, June 13).

The justices have another avenue for a broad ruling against EPA if they apply the major questions doctrine, which says that courts should not defer to agencies’ statutory interpretations on matters of “vast economic or political significance” (Greenwire, April 11).

During oral arguments in February, however, the justices appeared prepared to strike down EPA authority on narrower grounds (Greenwire, Feb. 28).

None of the West Virginia challengers has asked the Supreme Court to overturn its 2007 ruling in Massachusetts v. EPA, which said the agency had authority to regulate greenhouse gases as air pollutants under the Clean Air Act.

But some legal observers say they fear the precedent set in Massachusetts may be vulnerable — if not in West Virginia, then in some future case — after the Supreme Court last week overturned the long-standing constitutional right to an abortion (Greenwire, June 24).

The Supreme Court is expected to issue its two remaining opinions in 10-minute intervals starting at 10 a.m.

His departure paves the way for the swearing-in of Ketanji Brown Jackson, who was confirmed in April by the Senate to be Breyer’s replacement (E&E News PM, April 7).

“It has been my great honor to participate as a judge in the effort to maintain our Constitution and Rule of Law,” Breyer wrote in a letter to President Joe Biden.