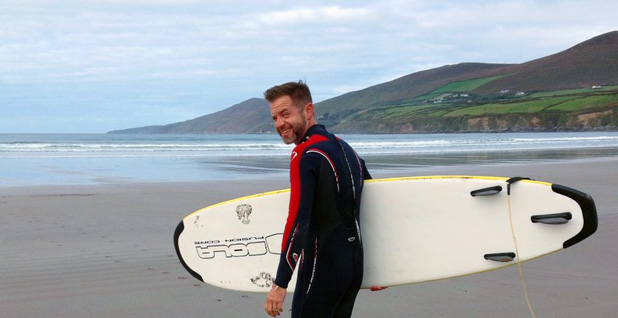 He’s bumped into sharks, swam alongside dolphins and schlepped his board from Cape Cod to Cocoa Beach.

But these days, the self-described thrill-seeker and father of two has a new challenge. He’s executive director of the National Association of Clean Air Agencies (NACAA), a heavyweight in Washington policy debates over Clean Air Act issues.

Keogh, an expert on utility issues, took over after NACAA founder Bill Becker retired. Keogh says he’s easing into the role and jokes it’s a bit like joining a "brainy version of the Justice League."

"It’s certainly not seamless once you take somebody who has 38 years of experience, who founded the organization, and you replace them with some surfer kid," Keogh said. "There’s obviously going to be a change in culture. I’m hitting the ground listening."

As for the association — known by its acronym, NACAA (na-ka) — Keogh said there’s a lot on the horizon in the coming months, from the Volkswagen emission tampering settlement, post-hurricane cleanups and raging wildfires that are snowing ash on Puget Sound.

What’s the biggest wave you surfed?

Waimea Bay, the day after Christmas. It was probably an 8-foot wave. This Hawaiian brother came up to me and said I was missing the lineup. He said the problem is "you’re not surfing with aloha."

What’s your favorite part about hitting the waves?

You get out there, and in Hawaii, when the waves are really big, or frankly even at my local break at Assateague, when you get through a really heavy set of waves and you just wait for your swells out there, it’s a really satisfying feeling to sit out there, bob up and down on the waves, be surrounded by marine life.

My 11-year-old, Riley, is now a very capable standup paddler. The younger one, Rowen, who’s 8, I haven’t taken out yet expect for sitting on the nose of my board. That’s OK.

She sounds exactly like Mary Poppins. One of the things my kids delight in is having her say lines from "Harry Potter." She’s originally from Stratford-upon-Avon, and she raised us all as Shakespeare dorks.

My mom was like, "I don’t have a job, I have these kids to raise." Some of my dad’s friends said they’d bring her into the State Department if she could pass the exam coming up in six weeks.

She was recently let go by Secretary of State Rex Tillerson. She was working in human rights, she was setting up schools for police. She’s retired now; she splits her time between Virginia and Quebec.

You have identical twin sisters, Kate and Molly? What’s that like?

My sisters are mirror-image identical twins, and it’s so creepy. They do all these things like, when I got married they came from opposite sides of the country and wore the exact same dress without consulting at all. Last Mother’s Day, they got my mom literally the same exact necklace with no consultation.

A number of states have left NACAA since 2013 to create what’s seen as a rival group, the Association of Air Pollution Control Agencies. Will you push to reconcile?

As of right now, there’s still an endangerment finding. … I have personal opinions on this, but I think we need to let the marketplace of ideas weigh out what that actually means for how states will do this.