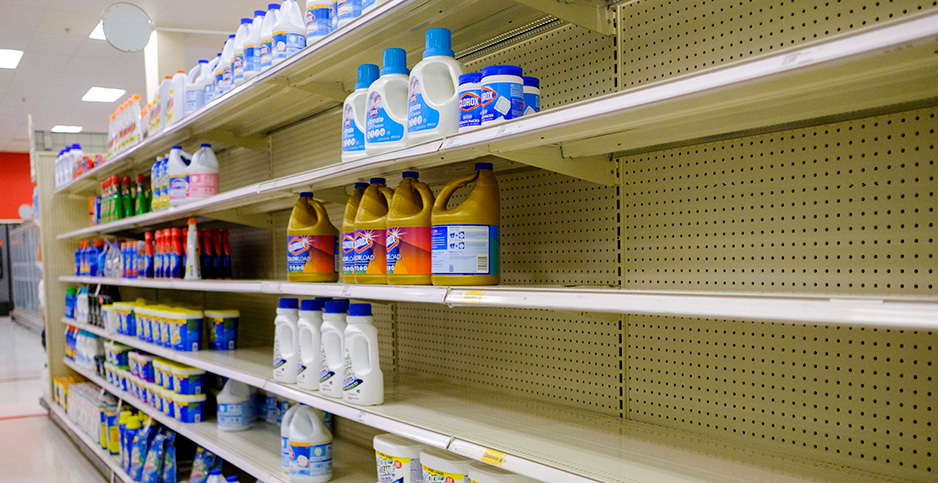 As demand spikes for disinfectants and sanitizers to fight the novel coronavirus, manufacturers are struggling to find the chemical ingredients needed to make products.

Stores are having difficulty keeping disinfectant wipes, sprays and hand sanitizers stocked, and manufacturers of those products are unable to obtain enough chemical materials like ethanol alcohol and isopropyl alcohol to make disinfectants.

EPA has even temporarily eased restrictions to allow manufacturers of already registered EPA disinfectants to "obtain certain active ingredients from any source of suppliers without checking with the agency first" to help ease the production of EPA-registered disinfectants, according to a March 31 announcement.

One of the ingredients on that list is ethanol, and it’s a material that Howard Bochnek, vice president of technology and scientific affairs at North American Infection Control, knows his manufacturers are having difficulty obtaining.

Bochnek said the demand for disinfectants is putting a strain on his manufacturers, who are unable to obtain enough alcohol for the products.

"As our demand increases, I’m ordering more products to be made, and I’m being told by our manufacturers that they cannot get enough alcohol fast enough to even be close to keeping up with the demand that we have for our product," he said.

Bochnek added that one of his suppliers in Turkey was cut off from sending shipments after the government prohibited the export of all disinfectants.

"We encourage the administration to swiftly oppose foreign countries imposing bans on exports of critical materials and supplies that are important to protecting health and safety in the U.S.," Geoff Freeman, president and CEO of the Consumer Brands Association, and Jeff Harmening, the chairman and CEO of General Mills Inc., wrote last week in an op-ed for Fortune.

The Consumer Brands Association, whose members include Clorox Co. and Target Corp., lobbied to include a provision in the $2 trillion pandemic relief package to "lift truck weight requirements on interstate highways to increase the flow of essential goods for coronavirus relief through the rest of the fiscal year."

But for Bochnek, the end result could either mean months of delay for the products or a halt to all production.

"It may come to the point where we actually get cut off and cannot have our disinfectants made," Bochnek said.

"We continue to safely and reliably operate our plants, ensuring that we continue supplying the many vital products that power the industries supporting health care, hygiene and medicine," she said.

LyondellBasell is a multinational chemical company that produces a variety of chemicals such as isopropyl alcohol (IPA), which can be used to make hand sanitizer.

The company recently donated isopropyl alcohol to Huntsman Corp. so the global manufacturer could make hand sanitizer to distribute to staff at the Huntsman Cancer Institute, the University of Utah Health hospitals and other clinics across the Beehive State. Huntsman is donating 5 tons of hand sanitizer, or about 1,200 gallons, to those health institutions.

"At this time, demand for our products used in packaging and medical applications, like IPA, ethanol and melt-blown polypropylene products, remains robust," Matthews said.

Ethanol to the rescue

Manufacturers that can’t get isopropyl alcohol are turning to ethanol plants, which are struggling to keep their operations open as the industry takes an economic hit due to a decline in transportation (Greenwire, March 27).

"This is as bad as it’s ever been," said Monte Shaw, executive director of the Iowa Renewable Fuels Association. "We’ve never seen margins this negative."

Ethanol is used to blend with oil for gasoline, and with gas prices so low, ethanol plants are unable to make a profit, Shaw said.

"You’re losing money on every gallon you’re producing," he said.

It’s easier for some of those plants to store the ethanol and wait until gas prices go up or make hand sanitizer to donate to local governments, he said.

Shaw said some IRFA members have been contacted by manufacturers about using ethanol to make generic disinfectants like sprays and wipes, but most members who are still operational are making hand sanitizer.

Distilleries have also pivoted to making hand sanitizer but are running into regulatory issues with the Food and Drug Administration, which requires a bitterant be added to the hand sanitizer, a chemical that those industries don’t have readily available (Greenwire, April 6).