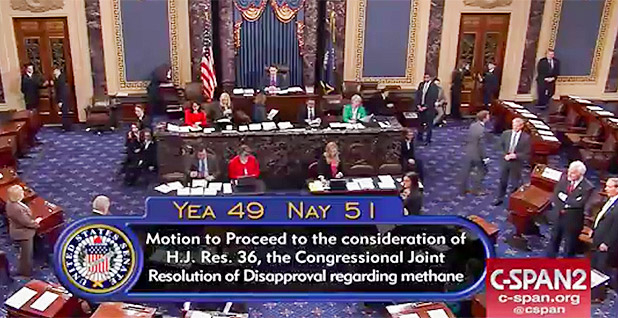 In a surprise defeat, the Republican-controlled Senate this morning failed to pass a measure repealing an Obama-era rule to cut methane emissions. Photo courtesy of C-SPAN.

An effort to repeal an Obama-era rule to regulate methane waste on public lands barely failed in the Senate today, with three Republicans joining Democrats to defeat the controversial measure that GOP leaders had struggled to pass under the Congressional Review Act.

Sens. Susan Collins of Maine, Lindsey Graham of South Carolina and John McCain of Arizona voted against taking up the disapproval resolution (H.J. Res. 36) that would have rolled back a rule that curbs greenhouse gas emissions from oil and gas flaring, venting, and leakage on public lands.

The motion to proceed to the resolution failed, 49-51. Under the CRA, senators cannot request a motion to reconsider, which means the expedited CRA measure is dead. While Congress can still use the CRA in the coming months, resolutions of disapproval after this week will no longer enjoy an expedited procedure and would be subject to filibuster (E&E Daily, May 8).

Republican leaders for weeks had expressed confidence that they had the votes to pass the resolution (E&E News PM, May 3). But in the end, no Democrats supported the measure. The impending CRA deadline and McCain’s apparent last-minute change of heart were the other two major factors that led to the resolution’s surprise defeat.

Sen. John Hoeven (R-N.D.), who was involved in amassing support for the measure, said he knew that McCain was wavering and "might not vote for us." According to Hoeven, the Arizona senator indicated "he was with us" but talked to the resolution’s sponsor, Sen. John Barrasso (R-Wyo.), last night, telling him he had changed his mind. But because of tomorrow’s CRA deadline and "some D’s that were undecided," Republicans had to move ahead with the vote today, Hoeven said.

The publicly undecided Democrats, Sens. Heidi Heitkamp of North Dakota and Joe Manchin of West Virginia, both voted against repealing the methane rule. Other holdouts, including Republican Sens. Cory Gardner of Colorado and Dean Heller of Nevada, voted for repeal.

Asked whether he was frustrated with McCain, Hoeven said the two were "good friends" who will continue to work together. "Everyone casts their vote the way they should; I respect that."

After the vote, McCain said that while he is concerned the BLM methane rule "may be onerous," passing the resolution would have prevented the government from issuing any rule that is "similar," due to CRA restrictions.

"I believe that the public interest is best served if the Interior Department issues a new rule to revise and improve the BLM methane rule," McCain added in the statement. "I look forward to working with my colleagues who voted to proceed to the resolution today."

Barrasso, chairman of the Environment and Public Works Committee, did not directly address whether he knew McCain would oppose the CRA but said he had been "talking with members throughout the process." The Wyoming Republican added that the methane rule was one of the most expensive signed by the Obama administration, and that he would now work with Interior Secretary Ryan Zinke to kill it.

"I call on Interior Secretary Zinke to withdraw the rule immediately," Barrasso said in a statement. "If left in place, this regulation will only discourage energy production, job creation, and economic opportunity across the West. The state of Wyoming and other leading energy producing states already regulate methane emissions. We don’t need this duplicative rule."

EPW ranking member Tom Carper (D-Del.) said he was not completely surprised by McCain’s vote, calling him a "maverick" and "free spirit." He added, "When I see him, I will probably give him a hug."

Carper called it the second victory in two weeks for greens, coming on the heels of last week’s omnibus spending bill that he said rejected a White House effort to "cut the heart and soul out of environmental protection."

Response from supporters and opponents of the resolutions was fast and furious.

"The oil and gas industry tried to buy a win today but came up short," said Jennifer Rokala, executive director of the Center for Western Priorities, singling out praise for McCain and Sens. Michael Bennet (D-Colo.) and Tom Udall (D-N.M.). "This vote ensures that less taxpayer-owned natural gas will be wasted, saving all Americans money and giving Westerners cleaner air to breathe."

The League of Conservation Voters hailed the measure’s defeat but said environmental advocates could not afford to rest. "The battle for a clean, safe environment is far from over, and we will continue to stay vigilant, but today is a victory for all those who are raising their voice in resistance to the anti-environmental Trump administration, Republican leadership and Congress," said President Gene Karpinski.

The American Petroleum Institute expressed "disappointment" with the outcome of the Senate vote but said it was "encouraged" by Interior’s review of the rule as part of President Trump’s "energy independence" executive order.

Independent Petroleum Association of America President and CEO Barry Russell said the methane rule would hurt "small-producing, marginal wells" on federal lands. "Shutting-in these smaller wells means less royalties will get sent back to the federal Treasury. IPAA looks forward to working with the Interior Department on a targeted, meaningful solution that will achieve the common goal of ensuring the American taxpayers receive a fair and equitable return in the form of royalties while developing a safe, workable regulation, instead of this one-size-fits-all approach."

Today’s failure of the methane rule resolution marked the first CRA defeat for Republicans and Trump during this Congress. Trump so far has signed 13 resolutions into law.

"One loss is not significant compared to 13 victories," said Todd Gaziano, an attorney with Pacific Legal Foundation who served as the chief legislative counsel to the CRA’s sponsor, former Rep. David McIntosh (R-Ind.), and was instrumental in crafting the statute.