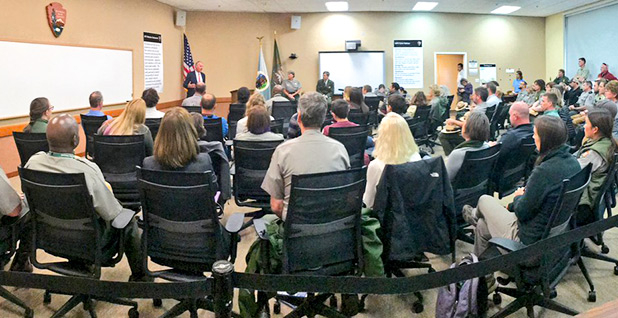 A long-awaited report on harassment released today depicts a dark and even dangerous work environment for thousands of National Park Service employees, with 39 percent of the workforce saying they endured some form of harassment over a 12-month period.

And with harassment so rampant in the national park ranks, the report said it’s affecting other employees who are forced to watch: More than 25 percent of all workers said they had witnessed their co-workers getting harassed or assaulted in the prior year.

The findings suggest that Interior Secretary Ryan Zinke, who oversees NPS, has a long way to go in implementing his zero-tolerance harassment policy.

Zinke and acting NPS Director Mike Reynolds met privately with employees at Grand Canyon National Park in Arizona today to discuss the results of the survey.

In a speech at the park, Zinke said that "too many offenders have been moved around, some of them even promoted, instead of being punished."

"Not only is it wrong, but it’s killing the morale on the front lines," Zinke said.

"Our survey results show that this pervasive culture is deeply ingrained at the National Park Service, and it’s clear that the change has to start at the top," he said. "I will gladly lead the charge. Intimidation, harassment and discrimination are viruses within an operation, and we’re going to eradicate them."

NPS appeared to be in no rush to release the findings, waiting more than seven months after the survey was done to make them public.

The survey was conducted from Jan. 9 to Mar. 5, when questionnaires were sent to all 18,550 NPS personnel who were employed as of Dec. 10, 2016. More than half of the employees — or 9,395 in all — responded. Since all employees did not respond, researchers examined the population characteristics of the NPS workforce, using human resources records, and concluded that the survey data were representative of all workers.

Jeremy Barnum, NPS acting chief of public affairs, said the initial timeline of the survey was extended because the agency wanted to meet "the highest standards of academic accuracy."

"In addition to the time required for careful data analysis, interpretation, and presentation, time was required to have both the survey instrument and the results peer reviewed by academic experts to ensure quality in design and results in the final report," he said.

The survey found that women and employees who were gay, lesbian or transgender were more likely to experience harassment than men and heterosexual workers and that workers younger than 39 and older than 50 were victimized more often than workers who were in their 40s.

NPS said it plans to release a separate study of newly hired personnel that was conducted from July through September.

For his part, Zinke has given the issue plenty of attention this year.

In April, he ordered all managers and supervisors to undergo harassment prevention training and called for a review of harassment policies and reporting procedures, pledging in a memorandum sent to all employees that sexual harassment "will not be tolerated."

"Bullying, degrading, and intimidating behavior is not acceptable and serves to dishonor the mission and values of our department," Zinke said.

He acted after a comprehensive report from Interior’s inspector general showed that a Yellowstone National Park repair crew had engaged in sexual harassment and drunkenness and made crude comments while on the job for more than a decade (Greenwire, April 12).

In another highly publicized case this year, NPS gave a new job and a bonus to a park superintendent at De Soto National Memorial in Florida accused of sexual harassment (E&E News PM, March 9).

In June, Zinke told the House Natural Resources Committee that he needed assistance in removing bad apples from NPS, noting that it’s hard to fire federal employees accused of misconduct.

"I need some help from Congress," he said.

In his speech today, Zinke said that "no civil servant should have to suffer silently — afraid of retaliation or isolation — when they’re just trying to do their job."

"Going forward, if you have a problem, the first thing you need to do is go to your supervisor or any other manager," Zinke said. "You can also call employee relations specialists or the Office of the Inspector General. But if you’ve exhausted all of your options and you aren’t getting help, you come to my office. … If we find that a manager is hiding it or not acting appropriately — they’re out. I have no problem removing manager after manager until there are none left."