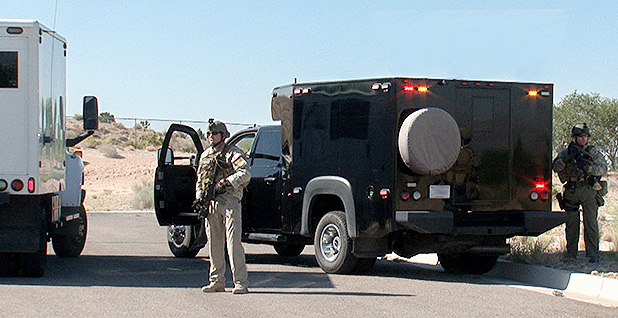 A report, once closed to the public, sheds more light on a security mishap at the federal agency responsible for transporting nuclear weapons across the United States.

The Department of Energy inspector general inspection report, released to E&E News under a Freedom of Information Act request made more than two years ago, provides fresh detail on a troubling incident from 2011. It centered on a suspended agent with the Office of Secure Transportation (OST) gaining "unauthorized access" to a nuclear weapons storage area.

The 19-page document — its "OFFICIAL USE ONLY" classification crossed out, lined with redactions under FOIA exemptions for privacy and law enforcement matters — describes a July 14, 2011, episode when the OST agent inappropriately gained access to a secure facility.

The agent was "not weapons qualified" and had been temporarily removed from OST’s Human Reliability Program (HRP), which is "designed to ensure that those who meet the highest standards of reliability, physical and mental suitability can gain access to nuclear weapons," according to the updated IG report, which is dated September 2015.

It took until July 20, 2011, to officially launch an investigation into the security incident. That is contrary to DOE policy that says a probe of a suspected breach should be initiated within 24 hours, according to the IG.

"Characterization and review of this incident was not initiated in a timely manner," said the report.

In addition, the National Nuclear Security Administration, which manages OST, could not provide evidence to investigators that it officially notified "the customer agency" that a suspended agent had unauthorized access to its facility — again, not in line with department policy.

Along with reviewing allegations focused on the suspended agent, the IG also received two complaints with similar concerns, including charges of "questionable management practices" by OST officials in Amarillo, Texas, one of the agency’s command posts.

The mission of OST agents is one of the most sensitive in the federal government. They drive modified tractor-trailer trucks with armed escorts to shuttle nuclear weapons and their components from DOE facilities and military bases dotted across the country.

The report had an ominous warning for OST that uncertified agents could gain access to nuclear weapons unless the agency acts.

"Unless OST takes actions to ensure that agents without active HRP certifications are clearly identified on [redacted] the risk remains that an agent who lacks required certifications could improperly gain access to certain materials, nuclear explosive devices, facilities, and programs," said the report.

The inspector general also found that certain OST officials knew the agent in question was suspended and appealed to an individual — whose identifying information is redacted in the report — to intervene. That person told investigators he didn’t intervene partly because he had already ordered the agent not to enter the secure facility.

The IG had several recommendations for the nuclear transport agency, such as making sure all OST personnel know their obligations to report security incidents, drafting written policies on how to handle such incidents and ensuring that only agents with HRP certification are on missions.

Management agreed with those recommendations and took action to fix those issues, according to the IG.

In response to written questions, Greg Wolf, an NNSA spokesman, provided a statement to E&E News.

"OST works diligently to ensure a safe, secure working environment in which all employees are treated with respect, and updates policies and procedures as needed so that issues or concerns — such as those in this report — are swiftly resolved," Wolf said. "As this report indicates, NNSA took corrective action in response to the 2011 incident. The HRP program is only one element of a comprehensive approach to ensuring the safety and security of OST operations."

The NNSA spokesman noted, "No nuclear facilities or material were damaged or otherwise put at risk as a result of the incident."

He added: "NNSA cannot comment further on the details of the 2011 incident due to operational security and the privacy of personnel."

The inspector general’s initial report on the breach at the nuclear weapons facility came under scrutiny from NNSA.

The IG issued a summary of its investigation in September 2014. But within months, NNSA questioned the accuracy of parts of the report, and the DOE watchdog also received another complaint that raised issues about the report’s accuracy.

The IG then decided to remove the report and put it under internal review. The report was then updated, and a summary of its findings was released in September 2015 while the full report remained closed to the public until its release to E&E News.

The nuclear transport agency has had a history of problems catalogued by the inspector general.

A November 2014 report by the IG, also obtained by E&E News under FOIA, found that over a decade, OST agents were repeatedly getting into fights with each other. One squad commander in Oak Ridge, Tenn., another of the agency’s command posts, was alleged to have threatened to kill an OST official (Greenwire, April 1, 2015).

The IG also uncovered OST agents getting drunk while on duty.

The DOE watchdog said in one memo issued in November 2010 that there were 16 incidents involving OST personnel and alcohol between 2007 and 2009. One OST agent was arrested for public intoxication in 2007, and two agents were handcuffed and detained by police after an incident in a local bar in 2009.

Wolf said despite past problems, OST agents are prepared extensively for their serious job.

"The personnel of NNSA’s Office of Secure Transportation (OST) are an elite force of highly trained national security personnel. Due to the sensitive and demanding nature of their work, OST agents are subject to rigorous security and safety standards," said the NNSA spokesman.

OST’s mission looks set to take on greater importance under the Trump administration. President Trump has touted the United States’ nuclear arsenal and has said he wants to modernize the force.

The White House has proposed for NNSA, which oversees the country’s nuclear weapons, a $13.9 billion budget in fiscal 2018, a $1 billion increase in funds from the prior year. The House has already passed funding legislation that matches Trump’s budget request for NNSA.

OST, too, would see a budget boost as part of Trump’s proposal for NNSA. The White House has planned a $325 million budget in fiscal 2018 for the transport agency, a nearly $69 million spike from a prior appropriation for fiscal 2017.

That increased budget would help OST up the number of applicants for agent jobs as well as handle higher training costs. Nonetheless, "substantial growth" in the agent force will take several years, warns the agency’s fiscal 2018 budget justification sent to Congress.

In addition, a bigger budget would help modernize OST’s fleet of trucks, including helping build two full-scale prototypes of the Mobile Guardian Transporter, a next-generation vehicle that agents will use to transport nuclear weapons around the country. Budget documents, however, say the earliest OST could use the new trucks in the field is fiscal 2024.

According to its budget plan, OST’s objective is simple enough: no lost nuclear weapons, no radiation leaks. Despite its troubles, the agency has met that goal through the years, traveling over 140 million miles so far.