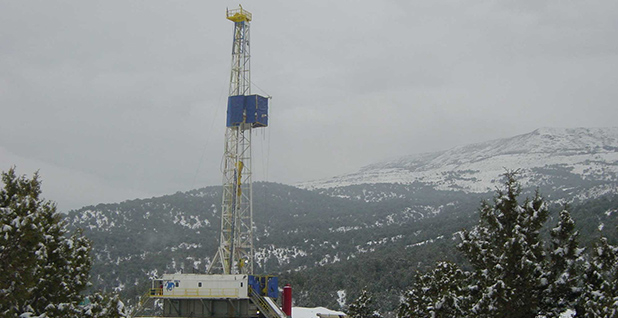 Colorado is weighing a bill that could overhaul the way the state regulates oil and gas drilling. Pictured is a gas drilling site near Rifle, Colo. Plazak/Wikimedia Commons

Colorado legislators early this morning passed a bill to overhaul the state’s oil and gas regulations following a 12-hour hearing that drew testimony from hundreds of people around the state.

More than 350 people signed up to speak in person and by video feed from locations around the state. And competing rallies drew hundreds of supporters and opponents to the Capitol in Denver.

The state Senate Transportation and Energy Committee approved the Democratic proposal on a 4-3 party-line vote at 2 a.m. local time, according to the Greeley Tribune. The measure must now be approved by at least one other Senate committee and the full Senate before going to the state House of Representatives.

• Clarifies that cities and counties have regulatory authority over the siting and surface impacts of oil and gas development and can inspect facilities, collect fees and impose fines for spills and emissions.

• Directs the state oil and gas commission to adopt rules requiring continuous pollution monitoring at oil and gas facilities and rules minimizing emissions of methane, other hydrocarbons and nitrogen oxides from the entire oil and gas cycle.

• Repeals an exemption that prevents counties from regulating noise at oil and gas production sites.

• Changes the Colorado Oil and Gas Conservation Commission’s primary goal from "fostering" oil and gas production to "regulating" the industry and protecting public health and safety.

• Removes a requirement for the Colorado Oil and Gas Conservation Commission (COGCC) to consider cost-effectiveness and feasibility when taking action to reduce the impact on wildlife and change the definition of "waste" so that the COGCC can leave some oil and gas unproduced in order to protect health and safety.

• Changes the makeup of the nine-member COGCC. The number of members with oil and gas expertise is reduced from three to one, and members with expertise in wildlife and environmental protection are added.

• Requires the COGCC’s executive director to hire up to two deputy directors.

• Clarifies that the COGCC has authority of oil and gas issues, but the relevant state agencies also have jurisdiction over air quality, water quality, solid waste and public health.

• Changes the permitting process so that operators have to show they have been authorized by the relevant local government or show that the local government doesn’t regulate siting before obtaining a state permit to drill.

• Says the COGCC can’t issue any oil and gas permits, with a few exceptions, until it has written rules to comply with any legislation passed in 2019.

• Gives the COGCC authority to prevent a broader range of environmental and health impacts, not just "significant" impacts.

• Changes the state’s forced pooling laws to require an operator to have proof of authorization from a local government and consent from 50 percent of mineral interest owners before submitting a pooling application. Also changing the royalty rate for owners whose mineral interests are pooled.

• Specifies that in conflicts between state and local regulations, the agency with the more protective standard for health and safety will prevail.

The bill has already churned up a fight that’s drawn the attention of national energy trade groups like the American Petroleum Institute. If it passes in its current form, Colorado would be one of the few oil patch states to allow broad oversight of drilling by local governments.

The measure, S.B. 181, would require the Colorado Oil and Gas Conservation Commission — the state’s main energy regulator — to focus on protecting health and safety. Currently, state law requires the commission to balance health and environmental concerns against the need to foster energy development.

The language, sponsored by Senate Majority Leader Stephen Fenberg and House Speaker K.C. Becker, both Democrats, would also clarify that cities and counties can control the location of wells, tanks and other facilities, and regulate surface impacts such as noise and traffic. Other provisions would require pollution monitoring, new bonding requirements for oil and gas wells and changes in the state’s forced pooling system for assembling blocks of mineral rights into drilling units.

Opponents at yesterday’s hearing said the changes could cripple the state’s oil and gas industry, leading to job losses that would primarily harm rural areas.

"If you recently visited rural Colorado, you know well-paying jobs are hard to come by," said Gary Melcher, speaking on behalf of the Colorado Farm Bureau. "The few jobs that are available will be gone."

Trade groups including the Colorado Oil and Gas Association said they’d been denied a chance to help write the bill and questioned why it was being considered two business days after it was introduced Friday.

But the bill’s backers, who believe they have a strong chance of winning because of Democratic gains in the 2018 elections, countered that Colorado’s current system doesn’t protect homeowners from pollution, the downsides of drilling.

They were joined by Erin Martinez, whose husband and brother were killed two years ago in a pipeline explosion that destroyed their home (Energywire, March 1).

"Under the current system … local governments simply do not have a seat at the table when it comes to oil and gas decisions," said Eva Henry, a commissioner from Adams County.

"With proper regulations and inspections and pressure testing, this entire tragedy could have been avoided," Martinez said, according to the Tribune.

The oil and gas industry spent the Obama years arguing that state agencies — not the federal government — are best-positioned to regulate development. The industry also pushed back against cities and counties.

In 2015, Texas and Oklahoma both enacted laws that curtailed local governments’ authority after the city of Denton, Texas, passed a local ban on fracking.

Several cities and counties in Colorado have tried to pass limits on fracking in their jurisdictions, but the state under former Gov. John Hickenlooper (D) maintained that they were exceeding their authority.

In November, voters rejected a statewide initiative that would’ve imposed a 2,500-foot setback between oil and gas facilities and surrounding buildings. But at the same time, voters elected Democratic Gov. Jared Polis, who favors stricter oil and gas regulation, and gave Democrats control of both legislative chambers.

For Democratic state Rep. Chris Hansen, the election was a clear signal from voters.

"The signal is, ‘We want you to address these problems,’" he said on a conference call sponsored by analysts from Robert W. Baird & Co.

Hansen predicted the bill would be amended but ultimately passed. It would likely result in some production cuts, particularly in Boulder County and other suburbs outside Denver. But Weld County, the heart of Colorado’s shale boom, wouldn’t see much impact.

Indeed, Anadarko Petroleum Corp., the state’s largest driller, said Monday that the bill would have little impact on its operations. Most of its Colorado acreage is in Weld County.

"We have sufficient approved permits and inventory of drilled, uncompleted wells to maintain planned activity into next year and fully expect to continue working collaboratively with communities in the DJ Basin to responsibly and safely produce oil and natural gas in the years to come," the company said on its website.

Yesterday, Anadarko issued a second statement opposing the bill, saying, "More time is necessary to debate, assess, and amend a bill this complex."