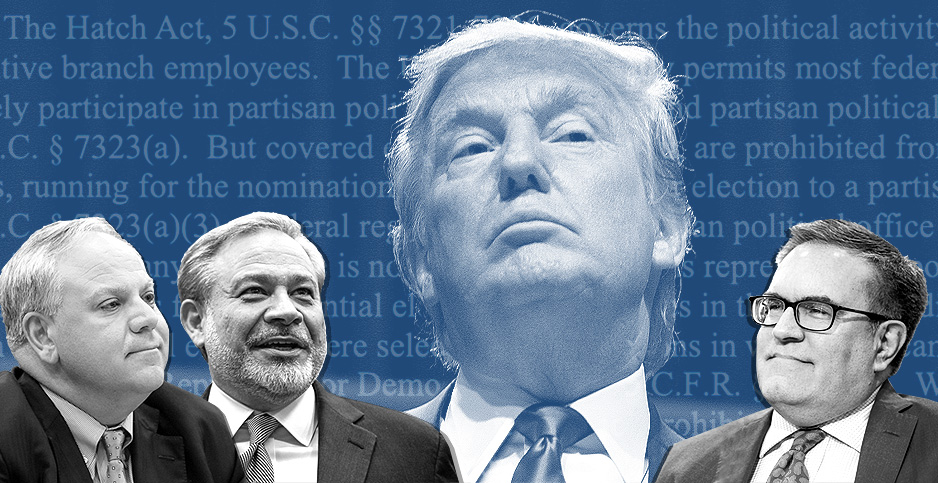 The heads of President Trump’s environment and energy agencies in recent weeks have focused considerable attention on states that are key to the president’s reelection campaign while walking a fine ethical line.

Each is promoting his agency’s respective policy agenda in the swing states. But they’re also sending a clear message that the states that will decide whether Trump gets another four years in office or is replaced by presumptive Democratic nominee Joe Biden have benefited greatly from the president’s actions.

"We haven’t had a president who’s better qualified to talk about infrastructure and the need for investment and the problems that people encounter when they’re trying to invest in communities than President Trump, probably since President Eisenhower created the highways," Wheeler said in a June 10 interview with Rich Zeoli, a Pennsylvania radio host.

"Previous administrations have tried to use a hammer with the Pennsylvania farmers. We’re trying to work cooperatively with them," he said.

Trump won the Keystone State in the 2016 election, the first Republican to do so since 1988. But the race in Biden’s home state is expected to be close this year, and the Scranton native has a good chance at winning.

Experts say the Trump officials aren’t breaking new ground — the practice has occurred under both Republican and Democratic administrations — and they aren’t likely violating federal prohibitions on using government money for political campaign purposes, including the Hatch Act of 1939.

"In my experience, it’s not unusual for Cabinet-level and agency heads in many agencies to be involved in helping the president of their party get reelected," said Don Fox, who was the acting director of the Office of Government Ethics from 2011 to 2013.

"And as long as the administration officials are not discussing campaign politics when they’re out and about, they’re not going to raise Hatch Act issues, nor issues under federal campaign finance law."

"The rule cannot be that, simply because a state is a swing state in an election year, it’s off-limits for members of the president’s Cabinet to go and speak to people in that state on official business," he said. "That would be the absurd result if you had any different rule."

Nathan Gonzales, editor and publisher of the nonpartisan Inside Elections, said he’s skeptical that a Cabinet member appearing in a battleground state would help Trump’s reelection bid.

"Visits by Cabinet secretaries give an administration an opportunity to be in more than one place at a time. It’s a way to garner local press coverage and try to demonstrate that the president is getting things done," Gonzales said. "But ultimately, I’m skeptical that visits by Cabinet members are the deciding factor in a race."

"During the Trump administration, over the last three years, we have reduced the six criteria air pollutants 7%. And this is at the same time that we have had incredible economic growth in our country," Wheeler said on Steve Gruber’s radio show, a program based out of Lansing.

Yet the Great Lakes have been a sore spot for Trump. Initially, he proposed eliminating or cutting by 90% EPA’s Great Lakes Restoration Initiative, only to announce at a campaign rally last year in Michigan that he would reverse his request and seek to fully fund it. Trump requested $300 million for the initiative for fiscal 2020, and $320 million for fiscal 2021.

In many of his visits, Bernhardt has made Trump out to be a strong leader, directing the nation’s reopening process.

"My direction from the president is to expeditiously increase access to our national parks, but do it consistent with the governor’s approach. So we’ll be flying right alongside each governor," he said on host Joe Thomas’ Charlottesville, Va., show. "The reality is there’s nothing better, I think, for America."

Brouillette has been less active on the swing-state circuit, though he did a series of conservative radio interviews in Pennsylvania in March to promote the Trump administration’s efforts to help the oil and gas industry. He also visited Florida this month to check how the energy industry there was preparing for hurricane season.

On Joyce Kaufman’s West Palm Beach, Fla.-based show, Brouillette gave Trump credit for the fact that there have been no energy supply problems during the coronavirus pandemic.

"And it speaks again to the strength of the energy policy of this president," he said. "What President Trump has done is pursue an energy policy of what he refers to as ‘all of the above.’ And what that means, basically, is using all types of fuel sources for the purposes of generating energy."

Representatives for federal agencies defended their leadership’s travel around the country, telling E&E News it showed they were completing their missions during the pandemic.

"As the country moves toward reopening, EPA Administrator Wheeler is resuming travel to fulfill the agency’s mission to protect human health and the environment in all 10 of EPA’s regions," EPA spokesman James Hewitt said.

DOE press officials didn’t respond to questions from E&E News for this story.

It’s not unusual for administrations to deploy top federal officials in an election year to battleground states to tout accomplishments, he said, and those officials can also even appear at campaign events.

But Schwellenbach said there are "muddier situations" if a top official appears with a member of Congress running for reelection that isn’t officially a campaign event — like a ribbon-cutting ceremony at a federally funded project.

"As long as the event is legitimate, usually [the Office of Special Counsel] will say that’s OK," he said, referring to the main agency that investigates potential Hatch Act violations. "But a pattern of disproportionately attending such events in battleground states or districts understandably looks like a deployment of taxpayer-funded resources for political ends."

Such travel was common among prior administrations, too — and also attracted scrutiny. A 2011 OSC report found that during the George W. Bush administration, taxpayer funds paid for political appointees’ travel to events meant to help Republican candidates before the 2006 elections.

"One can imagine no greater violation of the Hatch Act than to invoke the machinery of an agency, with all its contracts and buildings, in the service of a partisan campaign to retake Congress and the governor’s mansion," the OSC wrote in a May 18, 2007, memo.

Liz Purchia, a former head of EPA public affairs during the Obama administration, said it’s normal to see Cabinet officials travel to certain states and tout an administration’s successes that people might remember when the election comes in November. But she questioned the Trump team’s following that playbook.

"With the Trump administration, EPA has such a horrific record, and I would be hiding Andrew Wheeler, not putting him out there, because it’s more opportunity to ask him about all of the rollbacks," Purchia said. "I don’t understand why putting Andrew Wheeler in front of swing-state voters is a good idea. They should rethink their strategy."