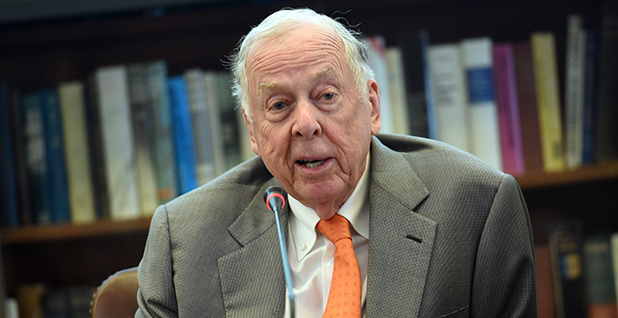 "I’m ecstatic that I’ve hung on long enough to see it all unfold," he wrote. "I’ve thrived and profited on the volatility in the energy space. But for me, personally, trading oil is not as intriguing to me as it once was."

Pickens, a former corporate raider who has also made a name promoting American natural gas, said his decision makes sense in light of his deteriorating health. He’s still recovering from a series of strokes he suffered late last year and a major fall over the summer. He also said he now plans to focus on "unbridled entrepreneurship and philanthropic and political endeavors."

Pickens on his website said his decision marks only the third time he’s walked off a job.

In 1953, Pickens packed up his belongings and left a major oil company at the age of 25, frustrated with the "bureaucracy." And in 1996, he walked away from Mesa Petroleum Corp. at the age of 68, a company he had founded and led as CEO for four decades.

Pickens has a lengthy resume in the energy world. He climbed to prominence through a series of corporate takeover bids in the 1970s and ’80s.

But Pickens in his release noted that times have been tough for energy, and the financial world is "littered" with shuttered energy hedge funds. Going forward, he said, the BP Capital Fund would move toward a "family office structure," and key members of the fund will be striking out on their own.

It’s not clear exactly how Pickens, a well-known supporter of President Trump, will engage politically.

According to Politico, the oil tycoon hosted the president’s financial backers ahead of the 2018 and 2020 elections at his Mesa Vista Ranch in October.

Pickens in May 2016 made clear to conference attendees at the SkyBridge Alternatives conference in Las Vegas that he was backing Trump and planning to contribute to Trump and a pro-Trump super political action committee (E&E Daily, May 12, 2016).

"Yes, I’m for Donald Trump. … I’m tired of having politicians as president of the U.S.," Pickens said at the time. "Let’s try something different."