Tables are turned as state AGs set their sights on Pruitt 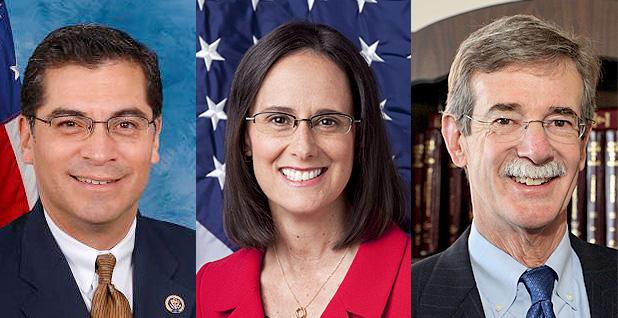 Scott Pruitt, who sued U.S. EPA more than a dozen times as Oklahoma’s chief legal officer, will likely soon find himself on the other side of lawsuits filed by Democratic attorneys general.

Democrats opposed to Pruitt’s efforts to dismantle President Obama’s environmental regulations are putting up their dukes.

"My office will stand firmly in the way if Scott Pruitt and the Trump administration threaten to gut the progress we’ve made in protecting our environment and tackling the dire impacts of climate change," New York Attorney General Eric Schneiderman pledged in a statement. "We won’t hesitate to protect New Yorkers — even if that means stepping up enforcement ourselves, and bringing litigation against the federal government — because too much is at stake."

State attorneys general have already signaled a willingness to mix it up, as evidenced by litigation filed quickly last month over President Trump’s executive order on immigration.

"In the past, there wouldn’t be collaboration until a law was signed," said Paul Nolette, a political science professor at Marquette University who studies state attorneys general. "Now it’s immediate. It provides the kind of frame that progressive and Democratic attorneys general are going to use during the Trump administration."

They’re expected to build on the collaborations formed during the George W. Bush administration, which also took on a deregulatory agenda. During the Bush administration, Democratic attorneys general and environmentalists succeeded in giving EPA the authority to regulate greenhouse gas emissions in the landmark Massachusetts v. EPA Supreme Court decision.

"If you’re an attorney general from California or Oregon or Washington, it’s relatively easier in terms of the very green constituency to be green all the time," said Howard Learner, executive director of the Midwest-based Environmental Law & Policy Center.

Emerging leaders include Schneiderman and Maura Healey of Massachusetts, both of whom are already heavily involved in the investigations of Exxon Mobil Corp.’s climate change activity. Washington state Attorney General Bob Ferguson, who’s led the legal battle against the immigration order, is also poised to play a key role.

Maryland Attorney General Brian Frosh is also eyeing a bigger role in litigation against the Trump administration after Maryland’s Democratic-led General Assembly last month voted to approve giving Frosh blanket authority to sue the federal government. The prior law required the attorney general to obtain approval from the Legislature or governor, currently a Republican, Larry Hogan.

In California, Nolette said, former Rep. Xavier Becerra’s willingness to give up a leadership role in Congress to be state attorney general signals that the Golden State will play a more active role than it played with Kamala Harris as attorney general. Harris was elected to the Senate in November, and Becerra became attorney general in January.

"He’s a smart guy," Nolette said. "He knows where the action’s going to be, and he knew that that position was going to be one in which he could advance progressive policy goals."

"For a Midwestern attorney general who comes from a coal state, she’s very good on clean air, clean water issues, pro-consumer protection and very involved in issues involving consumer finance," Learner said. "She wouldn’t be the equivalent of an attorney general from California on the environment, but Attorney General Madigan has been a strong environmental leader."

One early case where state attorneys general could be key is the litigation over the Clean Power Plan, the Obama administration’s landmark climate change rule targeting carbon dioxide emissions from existing power plants.

"They’ve been active on the climate front. I see them as continuing to be active and helping to defend Obama regulatory initiatives," Spalding said. "And they also have to really step up because if, as we are assuming will happen, EPA switches sides, it will be left to the intervenors to support the Obama EPA actions to defend those rules in court."

"The kitchen sink is being thrown at it, every possible thing you can imagine," Nolette said. "That’s another one of the advantages that the AGs have."

The opinion didn’t speak to using state common laws to litigate against emitters of heat-trapping gases, but nobody has yet brought such a case.

The Supreme Court "left open the possibility of state common law nuisance cases against greenhouse gas emitters even though the court said that that theory was not viable against emitters under federal common law," Gerrard said. "We’ll see if any states try it."

‘A friend in Scott Pruitt’

"I sincerely believe West Virginia will have a friend in Scott Pruitt," the state’s attorney general, Patrick Morrisey, said in a statement. "Scott’s principled approach will respect the law and reinforce the EPA’s core mission to protect our air and water without unconstitutional and job killing overreach, which has brought tremendous harm to West Virginia during the past eight years."

His background also includes secretary of the Commissioners of the Land Office, a $4 billion public land and investment trust in the state, and general counsel to the Oklahoma Corporation Commission, which regulates the state’s public utilities and energy companies.

Under Hunter, the attorney general’s office will likely intervene in litigation brought by Democratic attorneys general where necessary to protect states’ rights, but it won’t turn into "some sort of energy activist organization," said Oklahoma Oil & Gas Association President Chad Warmington, who has known Hunter for many years.

In general, Warmington added, "I don’t see that the EPA will be as much of an issue for him as attorney general."

"I don’t anticipate that the Oklahoma attorney general’s office will wade into as many of these, if any, lawsuits against the EPA because we’ve got Scott Pruitt," Warmington said, "who I think clearly demonstrated that he wants to have the EPA live well within the legal constructs set out for it by Congress."