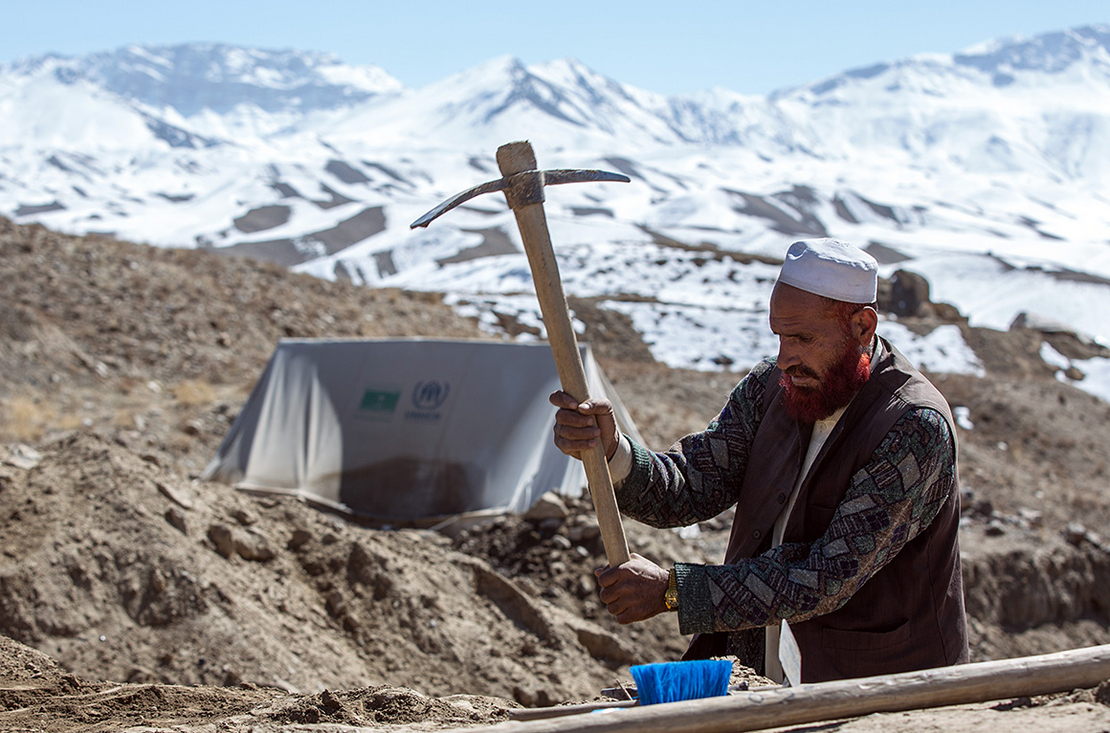 A local laborer in 2013 helping to excavate part of the mountaintop copper works above the ancient city at Mes Aynak in Afghanistan, which sits on the old Silk Road trading route connecting China and India with the Mediterranean. Matthew C. Rains/MCT/Newscom

With the its takeover of Afghanistan, the Taliban took control of a vast trove of metals and minerals vital to clean energy development.

The mountainous, war-torn Middle Eastern country sits atop rare earths and other strategic metals that U.S. experts valued at more than $1 trillion and are expected to grow more valuable as major economies shift to renewable energy and electrify transportation.

So extensive is the nation’s untapped mineral wealth that the Pentagon dubbed Afghanistan the “Saudi Arabia of lithium,” referring to a critical metal in electric vehicle batteries.

The U.S. Geological Survey, with help from its Afghan counterpart and the country’s Ministry of Mines, has also determined that Afghanistan could have a million tons of rare earth elements (Greenwire, Sept. 15, 2011).

Rare earths have long been the source of political rifts between the United States and Afghanistan’s neighbor, China, because Beijing controls the majority of the world’s production. Rare earths are 17 elements used in electric vehicles as well as advanced weaponry.

While it’s unclear what type of government the Taliban will ultimately form, these minerals could draw the attention of proxy powers — namely, China — should Afghanistan overcome obstacles ranging from chronic insecurity to a lack of infrastructure in order to develop its abundant natural resources.

“Of course, Russia, Iran and Pakistan also have eyes for these resources,” said Ahmad Shah Katawazai, a U.S.-educated diplomat who was a senior adviser to Afghanistan’s minister of foreign affairs until the Taliban seized Kabul on Sunday.

The U.S. government has long sought to develop oil, gas and mining industries in Afghanistan.

The Pentagon and the U.S. Agency for International Development started helping the country plot strategies for building a regulatory system for its natural resources in 2009.

That $488 million effort had mixed results because of loose commitments by the Afghan government, according to a 2016 audit by the special inspector general for Afghanistan reconstruction (Greenwire, Jan. 14, 2016).

In September 2017, President Trump met with Afghan President Ashraf Ghani for the first time during a session of the U.N. General Assembly in New York.

Katawazai, who was then defense liaison at the Afghan Embassy in Washington, said the Trump administration raised the prospect of mining lithium and rare earths at the meeting.

“That is what the United States administration wanted from the Afghan government,” Katawazai said in a phone interview from Kabul this week.

Ghani, a former World Bank economist, was skeptical of whether resources could be developed on a large scale, as Afghanistan faced so many high hurdles.

The main reasons for his apprehension were armed conflict and the strong presence of powerful warlords.

And then there was a lack of infrastructure and rampant corruption in the government, including in the Ministry of Mines, Katawazai said.

He referred to 2009 news reports alleging that the former minister of mines, Mohammad Ibrahim Adel, had taken a $30 million bribe from a Chinese state-owned company in connection to a thus far unsuccessful attempt to develop one of the world’s largest unexploited copper deposits

“From Chinese to everybody, they were bribing the officials,” Katawazai said. “All these reasons, if we combine, that was taking us to the resource curse. That’s what the president didn’t want.”

Katawazai said he was working in the Ministry of Foreign Affairs office at the time, his last day on the job.

“If we’re worried about minerals funding conflict and human rights abuses, we should make sure supply chains are as transparent as possible using traceability frameworks like blockchain,” said Wulf, whose group advocates for electrifying the transportation sector.

Mining has been a major source of income for the Taliban as well as the Islamic State group in Afghanistan, according to a 2018 report by Global Witness, a human rights organization. Mining talc, an ingredient in paint, cosmetics and plastics, was earning the Taliban as much as $300 million per year at the time, the report estimates.

“The question is how the Taliban will run the government [and] how they will contribute to the economy. How can they exploit these resources? That’s impossible for the Taliban,” he said.

That possibility is still a long way off. Even in developed nations, bringing major mining projects online can take more than a decade.

As for lithium, Simon Moores, managing director of London-based analytical firm Benchmark Mineral Intelligence, said on Twitter that the resource is not rare enough to mean automatic riches and that development of Afghanistan’s lithium resources would be an extremely long-term prospect.

“To suggest Afghanistan’s lithium is a pot of gold for the Taliban, China or anyone else is just incorrect,” Moores said.

China has already shown interest in Afghan copper. The state-owned China Metallurgical Group Corp. reached a $2.8 billion deal for a 30-year lease on a deposit at Mes Aynak in 2007. That company has ceased work at the site, Foreign Policy reported.

“Right now, the major interested power is China, given the Chinese relationship with Pakistan, and then Pakistan’s influence on the Taliban,” he said. “China will be very interested in exploiting these resources.”