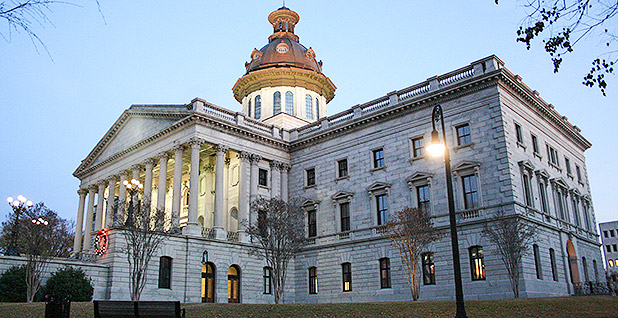 The South Carolina budget officially calls for exploring the state’s regulated utility market setup and changing it to a competitive one. The state Capitol is pictured. Florencebballer/Wikimedia Commons

Such a move would break up the current structure of regulated electric companies and cooperatives in South Carolina, which advocates argue would lead to cleaner energy options and lower costs for customers. It also would be the latest step in efforts to reform the Palmetto State’s energy climate since a collapse of a nuclear plant more than a year ago.

In North Carolina, the desire to shift from a market dominated by regulated electric companies is being shaped by different forces. The discussion is coming at a time when Charlotte, N.C.-based Duke Energy Corp. has proposed a multiyear rate plan to pay for major projects, including grid upgrades. Clean energy advocates also have accused the company of taking steps to control solar and cornering the market on storage.

Discussions center around the potential creation of a regional transmission organization, a federally regulated operator that controls and monitors the electric grid across multiple states.

But the Carolinas are far from united. Plans to study a regional transmission entity have partial legislative approval in South Carolina. In North Carolina, the talk is just that for now, but it’s starting to get louder.

Carmody’s first target is Duke’s proposed multiyear rate plan. The second step for North Carolina is to follow in its neighbor’s steps and study what an organized competitive energy structure would look like.

That proposal could come soon, Carmody said. He talked broadly about a House bill that would ask state utility regulators to oversee a study of placing generation assets into an organized market.

"I think political leadership has to look at employers choosing whether to locate in [the] PJM [Interconnection] territories and say, ‘Something’s got to change for the Carolinas,’" he said.

North and South Carolina share common electricity links that are likely to play a strong role in any market reforms, regardless of which state initiates them. Duke and Richmond, Va.-based Dominion Energy Inc. own electric companies that operate in both states. Duke also has confirmed its desire to buy South Carolina’s public power utility, Santee Cooper, which would strengthen its presence there.

The energy giants are caught up in the nationwide trend that is shifting toward distributed electricity technologies, and their century-old business models do not align with that. The companies need to spend money to make money, and absent a continual need to build power plants and transmission lines, they are forced to look for other ways to secure revenue.

This becomes more difficult as customers can do things like connect solar and batteries to their home or business.

"We probably need to do something different," said Ivan Urlaub, executive director of the NC Sustainable Energy Association. "Can we better align the financial interests of the utility and its customers and the competitive industry that is out there to deliver distributed energy solutions competitive renewables?"

The state Senate has agreed to create a regional transmission organization study committee to learn how residents and businesses will benefit from a competitive market structure.

The Senate passed a budget amendment last Thursday night that formed the new panel. The House has already passed its budget but must agree to the Senate’s changes. It’s unclear whether that will happen; the Legislature has eight working days left until the session wraps for the year.

Members of the committee would include: House and Senate lawmakers; the Office of Regulatory Staff; residential, commercial and industrial customers; and representatives from Dominion, Duke and the Electric Cooperatives of South Carolina.

It also calls for renewable energy advocates who specifically work in the utility-scale and rooftop solar industries, as well as someone from the Solar Energy Industries Association.

Dominion-owned South Carolina Electric & Gas Co. did not comment on the study committee. Santee Cooper currently does not have a seat, but spokeswoman Mollie Gore said any study should include the utility because it operates the state’s largest transmission system.

The study committee must file a report to the Legislature by the end of the year. The panel would be finished after that, unless the Legislature asks that it have more time.

Most people interviewed by E&E News agreed that changing the market structure is something that will take time and likely evolve over several years.

Energy policy has been at the forefront of political discussions after two South Carolina-based electric companies walked away from the half-built V.C. Summer nuclear project in 2017.

And yet, for all the heated debates that stemmed from V.C. Summer’s fallout, the RTO amendment was anticlimactic. Republican state Sen. Wes Climer briefly described the committee and who would be on it, and it passed in less than a minute with no questions or discussion.

Climer raised the idea of competitive energy procurement last month during a committee debate about a bill designed to boost solar and expand carbon-free generating sources in the state (Energywire, March 15).

At issue was a provision known as the Public Utility Regulatory Policies Act. Broadly, the federal law requires utilities to purchase energy from small-scale developers.

"I’m a big supporter of introducing more competition into the energy generation arena," he said during the March meeting.

That isn’t the only component in South Carolina.

Santee Cooper’s future as a state-owned power company has been on the line since V.C. Summer fell apart. A bidding process for the utility has yielded four top suitors — one is Duke and another is NextEra Energy Inc. of Florida, company executives confirmed.

The bidders have proposed significant changes to Santee Cooper’s energy fleet, most notably shifting away from coal to rely more on natural gas and renewable power. Some of the state’s electric cooperatives are calling for the same.

"I feel that if we have a fuel mix where we can incorporate more renewables, that would help lower costs for our consumers because we have more options out there," said Dwayne Cartwright, CEO of Berkeley Electric Cooperative Inc., which serves the Charleston, S.C., area.

"If you have an old-generation fleet and your baseload is going to be outdated or environmentally unfriendly, their cost has no place to go but up."

Rob Hochstetler, CEO of Central Electric Power Cooperative Inc., has been vocal about the rates he and the other cooperatives pay Santee Cooper for electricity versus what they pay Duke Energy Carolinas LLC, under long-term energy contracts.

He supports studying what a regional transmission organization would look like, arguing that it could help drive those electricity costs down.

"If there is potential to save customers money, we want to investigate that," he told E&E News.