Talk of unicorns and ‘eco‑terrorists’ at alternative forum 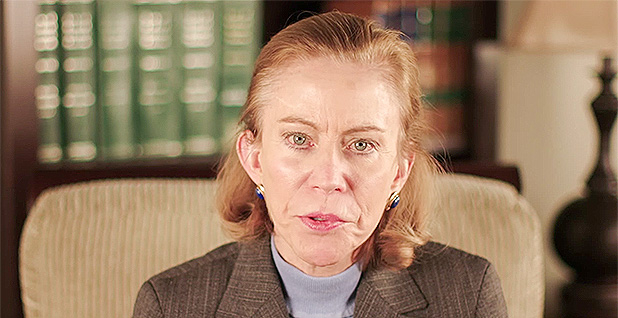 Those were some of the themes at the Heartland Institute’s annual conference, where attendees and speakers mocked established climate science and described themselves in a plight against extreme environmental activists.

The conference, held yesterday in Louisiana, a state that’s witnessing the effects of rising temperatures, included current and former Trump administration officials and researchers who claim humans are not the primary drivers of climate change. A member of the House Science, Space and Technology Committee also spoke to conference attendees.

Rep. Clay Higgins (R-La.) said the country needs to develop more fossil fuels, both onshore and off. He also said environmentalists who believe the United States can be less reliant on coal, oil and gas are counting on "rainbow dust and unicorn milk" to power the nation. The crowd cheered, and he used a familiar talking point of those who reject climate science.

"The climate has been changing since Christ was a choir boy," Higgins said.

The Heartland Institute, which has sought to discredit mainstream climate science, featured panelists yesterday who explored how carbon dioxide was not a pollutant and how environmentalists allegedly colluded with Russia against the energy industry.

Brooke Rollins, director of the White House Office of American Innovation, touted America’s clean air and credited it to the administration. She said that was accomplished in spite of President Trump’s decision to withdraw from the Paris climate agreement, signed by almost 200 nations. Rollins, the former head of the conservative Texas Public Policy Foundation, credited those in the audience with helping achieve that goal.

"What an amazing story to tell, without being a part of Paris climate agreements and Kyoto [Protocol] this and that, that we can in fact really help people and change lives and clean our air better than almost anyone else in the world is really one of the great untold stories I think of our generation, and thanks to so many of you in this audience who have really made that possible," Rollins said.

Jason Funes, a special assistant in the Office of Intergovernmental and External Affairs at the Interior Department, promised that the "literal war" on fossil fuels had been ended by his bosses, Interior Secretary Ryan Zinke and Trump. He said Americans who turn on their air conditioners while fretting about global warming are hypocrites.

Funes then played a video showing clips of Martin Luther King Jr. and President Franklin Roosevelt, and footage of worn hiking bridges and muddy trails to demonstrate how Interior’s plan to use royalties from federal onshore and offshore energy production would pay for a $12.6 billion maintenance backlog. He did not mention Zinke’s proposal to increase entrance fees at some popular national parks from $25 to $70, which was later scrapped.

"President Donald Trump is not only a builder, he’s a preservationist and he’s a conservationist, and through oil and gas production here in the United States of America, we’re going to get back to building the bridges, the roads, the facilities at our national parks that all Americans are going to be able to enjoy," Funes said. "So this Trump administration is not your daddy’s oil and gas production for old times, this is a new age, a new era of American energy dominance and its benefit to Americans of all kinds, all shapes, all colors, so that we can not only have affordable and reliable energy here at home, [but] so that we can actually enjoy the great outdoors and the national treasures that we have in our national parks."

One of the featured speakers was Kathleen Hartnett White, a fellow at the Texas Public Policy Foundation. She had to withdraw as Trump’s pick to head the White House Council on Environmental Quality after stumbling over questions of basic climate science. She claimed carbon dioxide emissions from fossil fuel burning were not a pollutant.

White didn’t address that controversy yesterday, but she repeated some of her familiar talking points about how fossil fuels play a role in prolonging the human life span. She also portrayed those who hold views similar to hers as victims.

"We all seem to make so much sense and credibility when we discuss these topics here today, but there is a very powerful, very well-heeled, however you want to identify them, of the left or whatever, but no-holds-barred climate alarmists that really imagine we can decarbonize, using that phrase I think that it’s kind of hard to say the word decarbonize," she said. "It’s amusing to imagine we can do so, we’re built of carbon, to imagine that we could and should as a means to avert some sort of apocalyptic global warming that we actually could reduce our energy consumption in the United States by 80 percent."

Roy Spencer, a climatologist at the University of Alabama, received an award for courage at the conference. He said his office had been targeted by "eco-terrorists" and that he was happy to be among like-minded people. (Someone shot Spencer’s office building last year, but police have said the act was random and have not connected it to environmentalists.)

Rollins, the White House official, stressed the importance of having dialogue and discussions with those who don’t agree with each other. That theme was not echoed by other speakers, who complained of a "radical leftist agenda." Then Rollins said the audience had truth on its side, alluding to the idea that climate scientists are misguided.

"There is so much great opportunity to, believe it or not, come together, and even if you agree on one issue out of 100, and there’s 99 things you disagree on, it’s finding the one thing you can agree on to try to move the country forward," Rollins said. "It’s maybe a little bit more difficult because the people on the other side of what we believe are obviously very dug in, but I think when you have the truth and the righteousness, the righteous cause of liberty is what I call it, on your side, that that will, should always and most always will win the day."