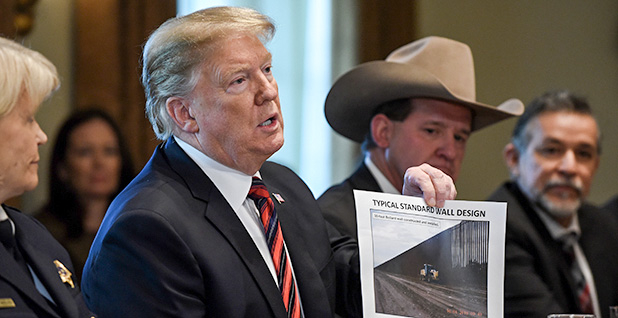 With the partial government shutdown entering a record-setting fourth week, President Trump is signaling he’ll hold off on declaring a national emergency to fund a wall along the Mexican border, as Republicans continue to express reservations about White House plans to tap military construction and disaster funds.

The debate comes as the House this week prepares to pass another disaster supplemental package with aid for communities affected by wildfires and other natural disasters.

There were no signs of a deal to end the shutdown over the weekend. After speaking with the president yesterday morning, Sen. Lindsey Graham (R-S.C.) told Trump he should reopen the government and continue talks on wall funding.

Reopening the government is the strategy the House Democratic majority is pushing, having passed four individual appropriations bills last week, including the Interior-Environment measure. Senate Majority Leader Mitch McConnell (R-Ky.) says he won’t allow votes to end the shutdown until Democrats, Republicans and Trump are all on board with a way forward.

House Speaker Nancy Pelosi (D-Calif.) on Friday slammed reports that the White House wants to declare a national emergency and tap military construction and previously approved disaster aid to pay for the wall under such an order.

Should Trump "grant himself extraordinary powers to steal" funds from disaster-affected communities and civil works projects, she said, Democrats are "working together to develop legal, policy and communications responses should they be needed."

Trump himself retreated from the emergency declaration on Friday, saying he wants to continue negotiations that so far have gone nowhere.

"What we’re not looking to do right now is national emergency," Trump said during a Friday border security roundtable at the White House. "I’m not going to do it so fast."

The president said Congress should make a deal instead. "They should come back and vote," he said of Democrats, whom he attacked on Twitter yesterday.

"I’m in the White House, waiting," Trump tweeted. "The Democrats are everywhere but Washington as people await their pay. They are having fun and not even talking!"

House lawmakers from both parties on Friday acknowledged the uncharted territory the government has entered as the president weighs declaring a national emergency to construct a border wall.

"This is going to be an interesting history lesson for all of us," said House Natural Resources Chairman Raúl Grijalva, who criticized any proposal to divert disaster assistance funds.

The Arizona Democrat said that disaster money was "decided funding, approved by Congress." The idea that dollars allocated to victims of disasters in places like California, Texas and Puerto Rico would be shifted for wall construction "borders on illegal," and is "cruel," Grijalva said. "I guess Puerto Rico will pay for the great wall now, you know?"

Democrats worry that Trump could yank money from a list of Army Corps projects funded under the 2018 supplemental, an account totaling nearly $14 billion. But any play at that cash would face bipartisan pushback.

"Floods usually do not have political boundaries, so I think if that’s where they went, that would create a lot of bipartisan concern," said House Transportation and Infrastructure Chairman Peter DeFazio (D-Ore.), whose committee oversees the Army Corps.

"On top of that, the flood insurance program is bankrupt, so not doing things to mitigate floods would be a really bad idea," he added. DeFazio said he and his staff are still mulling over how to respond to what would be an "unprecedented" move.

"That’s to be seen, whether we have legal solutions or legislative solutions," DeFazio told reporters Friday. "We don’t know. We have to wait until we know where he’s going."

Rep. Mario Díaz-Balart, a senior member of the Appropriations Committee, said he did not think the billions set aside for disaster recovery in Puerto Rico could be repurposed for the border wall.

"That’s money that’s meant for Puerto Rico," said the Florida Republican, acknowledging that it also would spark angst among members if the administration attempted to do that.

Díaz-Balart said the administration and lawmakers typically can find money "here and there," and while there are some flexibilities in the system, they are "limited." The Floridian emphasized that there aren’t "billions of dollars just sitting there without a defined purpose" right now.

"You can always find some money, but I’m not aware of where you could find billions of dollars without having a potentially negative impact," the appropriator said.

Texas Republicans, too, warned Trump against diverting any money from flood projects funded in the wake of Hurricane Harvey, which hit the state’s coast in 2017.

"The president is now talking to his lawyers about whether he would have the authority to issue a national emergency and reprogram money that’s been allocated for other purposes, but I will tell you that I will oppose any reprogramming of Harvey disaster funds," Sen. John Cornyn (R-Texas) said late last week at an event hosted by the Texas Public Policy Foundation.

Republicans and Democrats alike were also cool to the proposal to divert military construction funds to the wall, which is considered another likely funding source if Trump declares an emergency.

Rep. Roger Williams (R-Texas) said Friday he currently could not support an emergency order. "I’m for letting Congress do what it’s supposed to do; I’m not for taking money from other sources," Williams told reporters Friday.

He cited ongoing military construction projects at Fort Hood in his district. "We’ve got a lot of good things going on down there," he said. "We’re rebuilding barracks; we’re fixing motor pools. I don’t want to break that up."

Cole demurred when asked if he would support such an order. "I’d want to see their legal justification," he said.

Rep. Mark Meadows (R-N.C.), a leader of the Freedom Caucus who is close to Trump and helped push for the current shutdown, said using disaster funds to pay for the wall is not in the cards.

"Let me just tell you, no one who is in the know is seriously considering that," he told reporters Friday.

Meadows insisted there were other funding options under review, including asset forfeiture funds and other "fee-based areas."

If Democrats won’t appropriate any money for Trump’s wall, Meadows suggested a national emergency "would be the next avenue or at least the next area the president should explore."

However, he cautioned that such a move would not necessarily mean an end to the shutdown. "They’re two separate things, and I can tell you anyone who thinks the national emergency declaration would actually end the shutdown … those two don’t necessarily go hand-in-hand," he said.

The new disaster bill House Democrats are bringing up this week includes carve-outs for mitigation and resilient building.

The package includes $12.1 billion for relief from the 2018 hurricane season and wildfires in California, topping the more than $7 billion package Republicans offered late last month as part of a failed compromise on the border wall.

The bill includes about $2.5 billion total for resilience and mitigation projects, which Democrats say is targeted at future disasters made more severe by climate change.

It also adds $1.16 billion for the Department of Housing and Urban Development’s Community Development Block Grants. That would give the popular program $2.8 billion in total resources, when combined with the round of disaster money passed into law last year.

Of that total, more than $800 million would be available for resilience and mitigation projects, according to a summary from House Democrats.

As the shutdown wears on, HUD is preparing to stop processing $9.5 billion of disaster recovery grants aimed at recovery from Hurricanes Harvey, Irma and Maria in 2017 (Greenwire, Jan. 11).

The new disaster bill could eventually be rolled into a larger package, as negotiations to reopen the government continue this week.

It would be a "good infusion of money" for mitigation if it’s passed into law, said Laura Lightbody, director of the Pew Charitable Trusts’ flood-prepared communities initiative.

"I think the reality is that the need and demand for mitigation — real mitigation that reduces risk and occurs before disasters strike — is so large that one supplemental isn’t going to do it," Lightbody said.