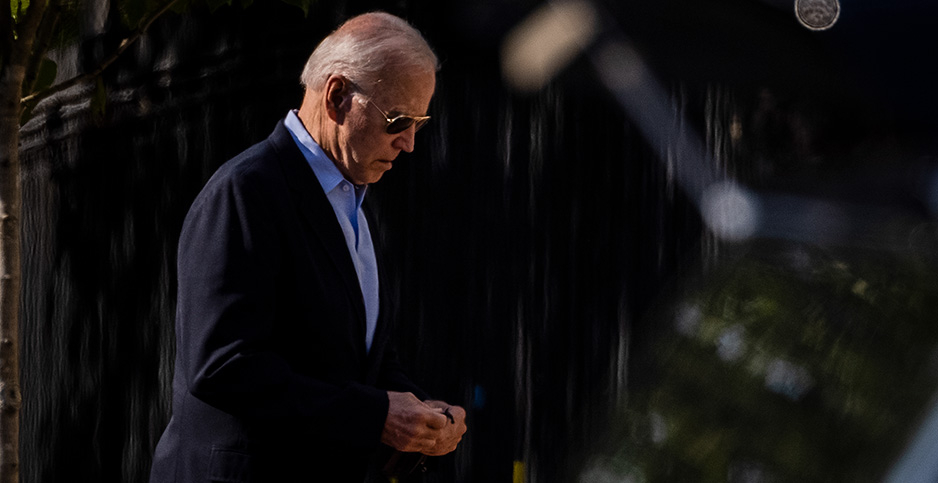 One set of bipartisan negotiations is dead. But another might be coming to life.

President Biden broke off infrastructure talks yesterday with Sen. Shelley Moore Capito of West Virginia, the lead Republican negotiating with the White House. Months of talks left the two sides about $700 billion apart and still disagreeing over the basics, such as what counts as infrastructure and how to pay for it.

Climate change emerged as a deal killer — demonstrating its rising importance to Democratic officials and their political coalition. But to Republicans, it was toxic. The White House blamed the impasse on GOP opposition to clean energy spending, among other differences.

Impatience to pass infrastructure on a party-line vote has been mounting among Democrats, who see this year as potentially the last chance to pass transformative climate policy before it’s too late to avert catastrophic warming.

Scientists warn that a safe climate depends on greenhouse gas emissions falling by half this decade. Republicans will never support policies aggressive enough to decarbonize in time, say progressives, who are urging Democrats to pass a big bill on their own.

The whole party isn’t quite there yet.

In the background of the White House negotiations, a group of moderate Democratic senators has been talking with Republicans about a separate infrastructure deal. One key difference: This time, energy policy might be on the table.

Those talks are now intensifying. Biden spoke yesterday with two of the Democratic negotiators, Sens. Joe Manchin of West Virginia and Kyrsten Sinema of Arizona, as well as one of the Republicans, Louisiana Sen. Bill Cassidy.

Cassidy said he spoke with Biden about climate.

"I brought up flood resiliency and energy provisions that would benefit Louisiana as well as the rest of our nation," the senator wrote on Twitter.

An open question is whether Biden would curtail his climate plans to secure bipartisan support.

Publicly, Biden has dug in on climate. When he made his first counteroffer to Republicans in May, he kept most of his clean energy proposals intact even as he cut $550 billion elsewhere.

But Biden later offered to cut his overall proposal in half, to about $1 trillion, from his original $2.2 trillion package.

The White House has refused to outline the spending details of that $1 trillion offer, including which programs Biden was willing to cut.

That whole dynamic has worried climate hawks like Sen. Sheldon Whitehouse (D-R.I.), who went public this week with his concerns that Biden might fail to pass his climate plans (E&E Daily, June 8).

"Climate has fallen out of the infrastructure discussion, as it took its bipartisanship detour," Whitehouse wrote in a Twitter thread. "It may not return. So then what?"

Indeed, the administration has emphasized that it has only two conditions for a deal: It cannot raise taxes on people earning less than $400,000, and "inaction" is not acceptable.

"The president views this bill as a jobs bill. He also believes it’s a clean energy jobs bill, and it has an opportunity to invest in industries of the future," White House press secretary Jen Psaki said shortly before Biden ended negotiations with Capito.

"So, certainly, it is close to his heart. It remains an area he’s committed to, and one he will continue to fight for as we have these discussions moving forward."

Republicans seemed to echo that assessment.

"They’re focused on climate change, social welfare, those sorts of things. And they want to have massive tax increases to pay for it," Wyoming Sen. John Barrasso, a member of Republican leadership and one of the negotiators in the failed talks, said yesterday.

Democrats find themselves somewhat forced into further negotiations because Manchin, their majority-making vote, insists on infrastructure being bipartisan.

That worries some progressives. In their view, more talks risk wasting time. Even worse, they could produce a compromise that shortchanges climate.

Even moderate Democrats are starting to get antsy.

"I think we need to get to work on making sure we understand how we can work with Sen. Manchin to get President Biden’s bold agenda on infrastructure, and on building back better, moving forward," Sen. Chris Coons (D-Del.) said yesterday on MSNBC.

A House committee starts marking up the highway bill today, offering a potential avenue to pass some of Biden’s proposals. And if every Senate Democrat gets behind a bill, they could use reconciliation to pass it on a party-line vote.

In the meantime, the president is leaning into ongoing bipartisan negotiations on Capitol Hill, directing his Cabinet and other top officials to engage with lawmakers while Biden makes his first overseas trip this week.

At least one member of Biden’s so-called Jobs Cabinet might miss those talks.

Energy Secretary Jennifer Granholm raised eyebrows over the weekend by criticizing Republicans in pointed terms while the rest of the administration was emphasizing the potential for a deal. She said it was "frustrating" that Republicans opposed climate policies in Biden’s plan that they had supported in the past.

"It’s just a bit perplexing why the Republicans haven’t moved further on critical pieces," Granholm said. "Those are all infrastructure plays Republicans have voted for and talked about. It was in Biden’s plan. It’s not in theirs."

She will travel tomorrow and Friday to Nevada to drum up support for Biden’s clean energy plans.