Talks pick up on ‘building blocks’ of infrastructure package 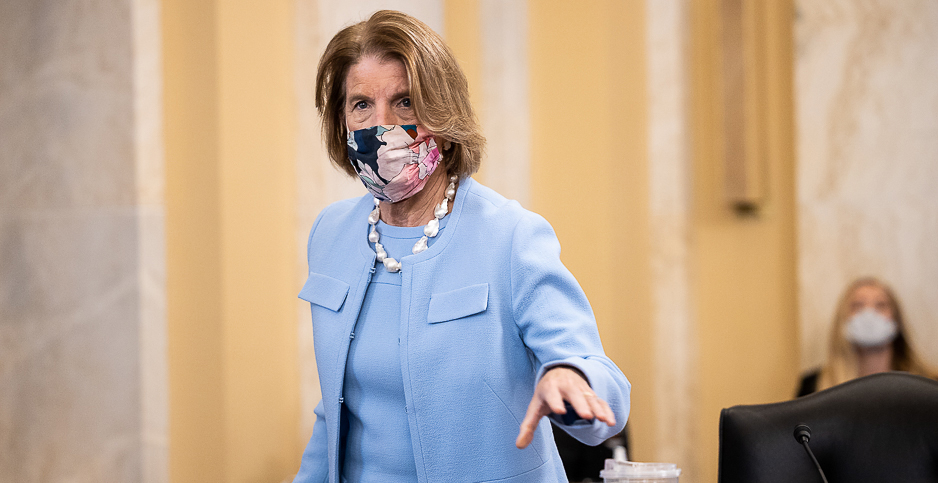 The House and Senate are technically not in session this week, but discussions on President Biden’s multitrillion-dollar infrastructure push will continue behind the scenes and in virtual committee hearings.

While there’s plenty of skepticism on both sides on the prospects for bipartisanship, there were also positive signs last week and over the weekend in the quest for common ground.

On Thursday, Biden and Sen. Shelley Moore Capito (R-W.Va.) spoke on infrastructure in a call that both sides described as helpful.

"She seemed very serious and very positive about wanting to do something about it," Biden told reporters Thursday, adding that he had invited the lead GOP negotiator to the White House to continue in-person talks. The timing of that meeting is unclear.

In a statement, Capito described a "constructive and substantive call" with the president. "I stand ready to be a partner in advancing infrastructure legislation in a bipartisan way — just as we’ve done in the past," said Capito, the ranking member on the Environment and Public Works Committee.

Capito told E&E News that discussions with the White House have largely focused on policy but have also included the thorny questions of pay-fors, which she declined to discuss in detail.

On Fox News yesterday, Capito said: "We’re working with the White House, and I think it’s been very open-door. We have been very encouraged to keep moving forward. And until somebody tells [me] it’s not working anymore, I’m going to try to reach that sweet spot."

Republicans remain adamantly opposed to Biden’s proposal to hike corporate tax rates over 15 years to pay for the infrastructure push. They also remain adamant on a smaller price tag.

"Let me tell you what I won’t support. I won’t support American businesses paying the highest corporate tax rate among developed countries in the world once again, and, unfortunately, that’s what 28% would be," Sen. Susan Collins (R-Maine) said on CNN’s "State of the Union."

"If you want to fix roads and bridges, come where Republicans already are," Sen. Bill Cassidy (R-La.) said on "Fox News Sunday." "If you’re talking about spending hundreds of billions of dollars on public-sector unions, we’re far apart."

Energy and Natural Resources ranking member John Barrasso (R-Wyo.) said on ABC’s "This Week" that bipartisan compromise was possible if Democrats gave up on environmental proposals, which he compared to the Green New Deal.

Barrasso said he was working with ENR Chair Joe Manchin (D-W.Va.) — a moderate being courted by both sides — on proposals closer to $500 million and focused on "core infrastructure."

White House adviser Anita Dunn was positive about the discussions but also left open the possibility of Democrats going alone. They would need Manchin for such a maneuver.

"We plan to have serious discussions with Sen. Capito and her colleagues. The president has said his red line is inaction, that we cannot afford not to make these investments in America’s economy and America’s workers, in good jobs for workers."

Sen. Chris Coons (D-Del.), a close Biden ally who has called for moving as much of the infrastructure package through regular order as possible and advancing issues opposed by Republicans through budget reconciliation, said last week he was having "vigorous discussions" with colleagues about finding common ground.

"I think there is a good reason for us to proceed with sincere bipartisan negotiations in the next few weeks, not indefinitely, as long as it is making real progress, both for the benefits of bipartisanship on its own … and because we don’t have a path towards passing $2.3 trillion by reconciliation without trying."

It’s hard to see how Democrats can avoid budget reconciliation entirely, especially if the infrastructure push is the only vehicle in sight for Biden’s promises on energy, the environment and climate.

Last week, for example, more than 100 groups asked that an infrastructure package include agriculture conservation programs that would help reduce carbon emissions.

Similarly, more than 100 groups asked lawmakers to include at least $10 billion for oceans, coastal restoration and the Great Lakes.

That Capitol Hill strategy reflects what Coons called a "simple political calculus here." "We only have 50 Democrats," he said. "Several of them publicly said, when the American Jobs Plan was proposed, ‘I’m not voting for that on reconciliation unless there is a sincere effort at bipartisanship.’"

In a promising sign for at least some bipartisanship, the Biden-Capito call took place the same day that the Senate overwhelmingly passed a $35 billion package, S. 914, to shore up drinking water and wastewater systems (E&E News PM, April 29).

The lopsided 89-2 vote and absence of major amendment fights was encouraging to members of both parties.

"I think it’s a good indication of the willingness of the Congress to engage and rally around traditional infrastructure needs," said Sen. Roy Blunt (R-Mo.). "You can use this as one of the building blocks going forward for an infrastructure bill."

He suggested that the water package could even grow in size if it were incorporated into a bigger package focused on more traditional infrastructure — as Republicans are pushing.

"I think it is indicative of the general congressional belief that this is a federal responsibility and it’s an important part of what we do, and there’s a real need to catch up," Blunt said.

"We’re passing a very good bill and much-needed legislation," Carper told reporters Thursday. "But it’s more than just water infrastructure. I think it’s an opportunity for our committee to provide a little bit of leadership by example. I hope we’re setting an example that other committees will emulate."

Carper also said that his and Capito’s staffs have already started drafting a surface transportation reauthorization bill, which is still on track for a committee markup before Memorial Day.

"Our staffs have already begun," he said of the measure, which has also been floated as the cornerstone of a bipartisan infrastructure package.

Among the unresolved issues in the highway bill is the role of earmarks, with Senate Republicans last month deciding to maintain their decade-old ban on the practice (E&E Daily, April 23).

Capito said she has not yet fully discussed the matter with Carper but said she "would prefer not to initially have the earmarks."

Also unclear is the financing for the surface transportation bill. Republicans have floated fees on alternative vehicles, including electric cars, that don’t currently pay into the Highway Trust Fund, but they are against raising the gasoline tax.

Capito said it was too early to say how the highway bill will be paid for but noted that it’s up to the Senate Finance Committee, not EPW.

"I don’t envy their job on that because it’s tough," she told E&E News. "But these ways, these things have a way of coming together. We’ll just have to make this part of the discussion."

There were also signs last week of bipartisan agreement on Biden’s call to replace lead pipes in housing as part of the infrastructure push.

A bicameral bloc of lawmakers from both parties introduced legislation to hasten abatement efforts by providing refundable tax credits for homeowners, landlords and tenants to remove lead from homes.

Whitehouse, who offered a version of the bill in the last Congress, called it "tragic that lead hazards still linger in older homes in Rhode Island and across the country because of the high costs of lead remediation" (E&E Daily, Nov. 19, 2020).

"Our tax credit would go a long way toward finally removing lead from those homes once and for all," Whitehouse said.

Several House committees this week will hold virtual hearings related to aspects of the infrastructure push.

On Wednesday, the House Energy and Commerce Subcommittee on Energy will hold a hearing on another pillar of Biden’s infrastructure agenda: boosting electric vehicles (see related story).

Also on Thursday, the Small Business Subcommittee on Innovation, Entrepreneurship and Workforce Development will hold a hearing on infrastructure and jobs.

Schedule: The Financial Services hearing is Tuesday, May 4, at 12 p.m. via webcast.

Schedule: The Energy and Commerce hearing is Wednesday, May 5, at 11:30 a.m. via webcast.

Schedule: The Transportation and Infrastructure hearing is Thursday, May 6, at 11 a.m. in 2167 Rayburn and via webcast.

Schedule: The Small Business hearing is Thursday, May 6, at 1 p.m. via webcast.