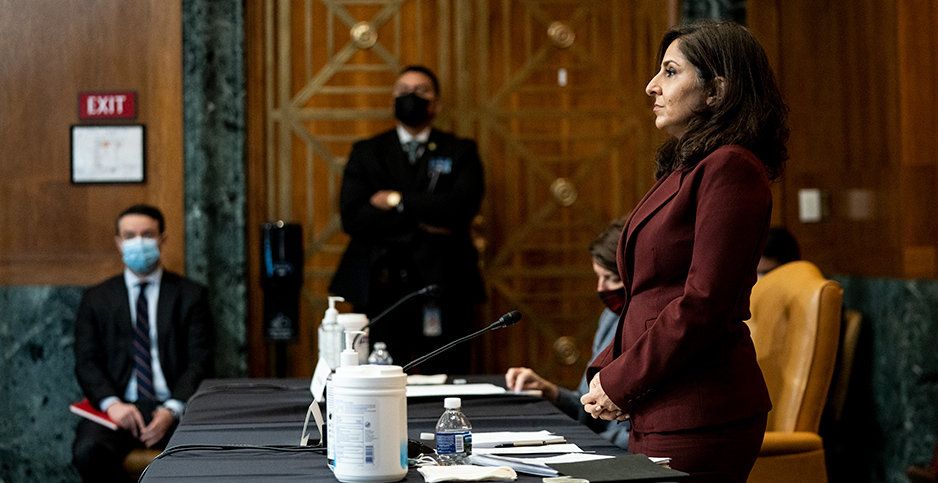 Office of Management and Budget nominee Neera Tanden during her second confirmation hearing yesterday in the Senate. Pool/Sipa USA/Newscom

"Your attacks were not just made against Republicans," the Vermont independent senator told the nominee for director of the Office of Management and Budget. "There were vicious attacks made against progressives — people I have worked with, me personally."

For the second day in a row, Tanden offered an apology for past mean tweets, which were directed at many Republican lawmakers and some progressives in Sanders’ circle (E&E Daily, Feb. 10).

"I recognize that my language and my expressions on social media caused hurt to people and I feel badly about that," said Tanden, who has headed the left-leaning think tank Center for American Progress.

Tanden’s supporters have laughed off the idea Republicans are offended by her insults, given former President Trump’s inclination for slighting people at rallies and online, and the GOP’s general loathing of political correctness.

Sanders yesterday urged Tanden to engage in "serious work on serious issues — not attacks on anybody whether they are on the left or the right."

The hearing covered top-tier issues like climate change, Medicare, the minimum wage and unemployment. But a major focus for both sides were Tanden’s political dealings.

"I am concerned about the level of corporate donations that the CAP has received under your leadership," Sanders said, citing a $38 million figure reported in The Washington Post.

"It’s important … to know those donations you secured at CAP would not influence your decisionmaking at [the Office of Management and Budget]," he said.

Tanden replied that the corporate dollars would "have zero impact" on her decisions. She noted that CAP took various policy positions in favor of strengthening financial regulations of Wall Street.

Sen. John Kennedy (R-La.) did not object to the idea of fundraising but expressed concern about undue Wall Street influence.

"I’m not suggesting you did anything wrong, but there will be a perception — not saying it’s reality — but in government and politics, perception matters," Kennedy said. "If you took them upside down and shook them you’d fall out of their pockets."

Kennedy also repeatedly pressed Tanden about the mean tweets, joking she called Sanders "everything but an ignorant slut." Tanden interjected to deny the remark.

Kennedy asked Tanden whether she meant the tweets at the time. Eventually, Tanden responded, "I must have meant them at the time, but I really regret them."

Republican Chuck Grassley of Iowa asked about regulatory reform, which was a major topic at Tuesday’s Homeland Security and Government Affairs Committee hearing. Regulatory review is under OMB’s purview in the Office of Information and Regulatory Affairs.

Tanden reiterated her position that cost-benefit analyses should be preserved but that they should also take into account intangibles and the impact of rules on real people.

Progressives have expressed high hopes about how the Biden administration might overhaul cost-benefit analyses to better capture all regulatory benefits to the public.

Sen. Sheldon Whitehouse (D-R.I.) made an impassioned plea, slamming hundreds of pages of reports on the financial fallout from the climate crisis in the coming years.

"I’d like you to comment briefly — how seriously you are going to take these warnings if there is a crash from carbon bubbles bursting?" he asked.

Tanden replied: "I absolutely take these seriously. The president himself recognizes the deep cataclysmic crisis."