Tanden talks regulations, apologizes for being mean to GOP 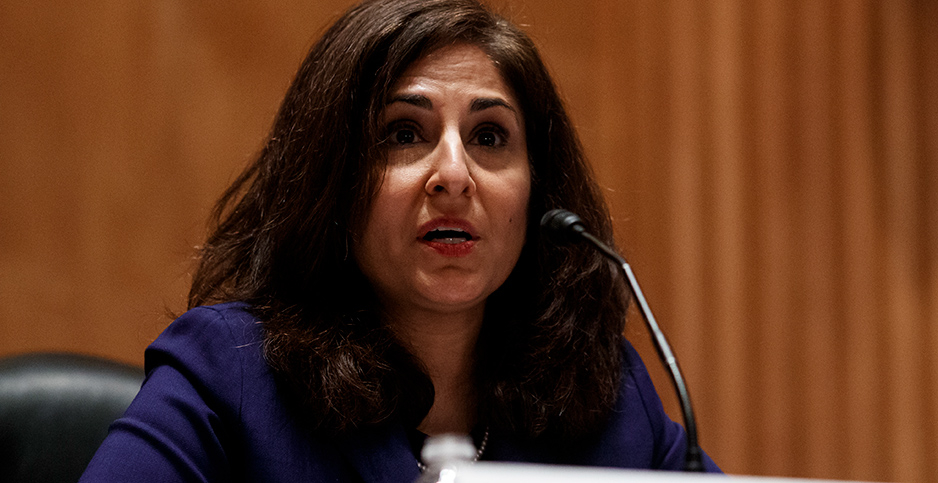 In a wide-ranging confirmation hearing before the Senate Homeland Security and Government Affairs Committee, Republican lawmakers pressed Tanden on her old tweets, trying to poke holes in the Biden administration’s calls for bipartisanship (E&E Daily, Dec. 1, 2020).

Sen. Rob Portman (R-Ohio), the committee’s ranking member, began his line of questioning by reading aloud a few of the adverse names Tanden had hurled at Republicans.

"You wrote that Susan Collins is, quote, ‘the worst.’ That Tom Cotton is a ‘fraud.’ That vampires have more heart than Ted Cruz. You called Leader McConnell ‘Moscow Mitch’ and ‘Voldemort,’ and on and on," he said, referring to Sens. Collins of Maine, Cotton of Arkansas, Cruz of Texas and Mitch McConnell of Kentucky.

"I recognize the concern," she said. "I deeply regret and apologize for my language and some of my past language. I recognize this role is a bipartisan role and know I have to earn the trust of senators across the board."

She added that recent years have been "pretty polarizing" and expressed hope that "we can work to address the country’s challenges in a bipartisan and nonpartisan manner."

Aside from the back-and-forth about the tweets, which ended after Tanden admitted to deleting more than 1,000 tweets "over many months," the much-anticipated hearing was rather tame, considering that the nominee has been among Biden’s more controversial.

Tanden’s hearing this morning before the Senate Budget Committee, which is chaired by Sen. Bernie Sanders (I-Vt.), could be more contentious.

Activists in Sanders’ orbit — known as Bernieworld — have been critical of Tanden, but it’s unclear how the senator himself plans to approach the nomination (E&E Daily, Jan. 22).

If confirmed, Tanden will oversee the White House’s budget and rule review process, which is housed in the Office of Information and Regulatory Affairs.

That bureau will play a key role in how the Biden administration implements climate policies and strengthens environmental regulations.

Already, the oil lobby has issued statements calling on Tanden to "outline how she would implement the President’s budget in a way that protects American jobs and serves all Americans."

Anne Bradbury, CEO of the American Exploration & Production Council, called the oil industry "one of the most thoroughly regulated industries in the United States" and said "there are real consequences" from the Office of Management and Budget’s review of rules and regulations.

Environmental regulations did not get much play at yesterday’s hearing, save for Tanden’s vow to work with Democrats to examine "forever chemicals" like per- and polyfluoroalkyl substances, or PFAS, at facilities throughout the country.

Portman asked whether Tanden thought independent agencies should be subject to cost-benefit analyses — something the Trump administration tried to pursue.

Portman complained that independent agencies — like the Federal Energy Regulatory Commission — are promulgating rules that are not subject to the same scrutiny as other agencies and, therefore, have been imposing outsize costs on businesses.

Tanden responded that independent agencies are independent "for a reason." At the same time, she called cost-benefit analyses and a related Clinton-era executive order "still important."

Some progressives have expressed high hopes that the Biden administration will rework the regulatory review process at OIRA.

They’ve been encouraged by top OIRA political appointees like Sharon Block, the new assistant associate administrator, as well as a memo Biden issued on his first day in office.

The memo, "Modernizing Regulatory Review," suggested a new direction for weighing the public health and environmental benefits versus the costs to businesses.

It also talked about so-called distributional impacts — for the first time grounding the OIRA process in real-world problems like racial inequity and climate change.

Asked yesterday about the memo, Tanden shied away from a complete overhaul of OIRA’s existing process but stressed the agency’s impact on real people. She said she does not want to "take away from cost-benefit analysis."

Exactly how the Biden administration will go about conducting cost-benefit analysis remains to be seen and could serve as an indication of how aggressive it might be in enacting environmental regulations.

Tanden also agreed to work with Sen. Jacky Rosen (D-Nev.) on a bill that would create jobs and alternatives for Yucca Mountain other than nuclear waste.

And Tanden agreed with Portman about the value of the Federal Permitting Improvement Steering Council. The senator called it "amazing," saying it has saved money and created jobs.

The council, which at the end of the Trump era voted to fast-track mining projects, was created by 2015 legislation but did not come to life until years into the Trump administration.

Democrats also pushed for quick aid to Americans during the coronavirus pandemic downturn. Tanden, whose parents immigrated to the United States from India and survived for years on food stamps, said she completely understood the impact of government help.

"I know when a family is in distress," she told Sen. Jon Ossoff (D-Ga.), who stressed the 40 million Americans who are unemployed and 12 million children who are going hungry. "I understand that completely."

Tanden offered personal details, like feeling embarrassed as a child that her mother had to pay for groceries with government vouchers.

On her way out of the hearing, with her mother by her side, she told reporters she thought the hearing went "great."