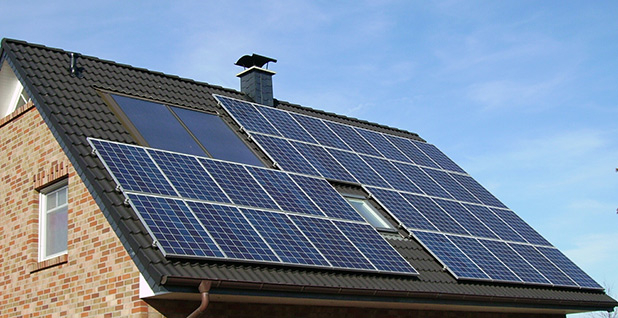 Lawmakers from both parties who are opposed to the Trump administration’s decision to impose tariffs on imported solar panels are considering legislative options to push back against the move.

Sen. Martin Heinrich (D-N.M.), who in August led a bipartisan letter urging caution in initiating the tariffs, said yesterday he has had initial conversations with Sen. Thom Tillis of North Carolina, the lead Republican on that letter, about a path forward.

"We’re looking at all our options and trying to figure out what we can do to push back on this, but it’s an unmitigated disaster of the president’s own making," Heinrich told reporters yesterday. "This is not a partisan thing. Those jobs are where they are and there [is] certainty in New Mexico."

In signing the tariffs yesterday, President Trump declared they would not result in a "trade war" (E&E News PM, Jan. 23). However, members of both parties said they were concerned about repercussions with trade partners.

"It’s a delicate balance between trying to get people to play by the rules and not hurting our own economy," said Sen. Lindsey Graham (R-S.C.). "Tariffs are things that once you start, the other side can do it too."

While Graham said he was chiefly concerned with accompanying tariffs on imported washing machines, he said he shared the concerns of solar supporters.

"Most of the jobs in America come from installation, and these tariffs are going to increase the costs," he told reporters.

Graham, however, said the prospects for legislative remedies are unclear, noting he raised the issue during the weekly GOP caucus lunch yesterday.

"People were concerned, but there was no unified position," he said.

Sen. Ben Cardin (D-Md.), who signed the Heinrich-Tillis letter, echoed the sentiment. "I don’t know the legal basis for imposing and whether we can effectively change that law or not, but it’s generally difficult to overturn a presidential decision," he told E&E News.

Sen. Rob Portman (R-Ohio), who served as U.S. trade representative in the George W. Bush administration, said he had not yet studied Trump’s actions.

"In Ohio we have a little different situation, we have a solar manufacturer that has production, as I understand it, both here and overseas," he told E&E News. "So I need to look into it."

Asked about legislative options, Portman said, "We can always change the laws, but I don’t think he’s done anything that’s outside the law."

According to the Congressional Research Service, any presidential action that differs from the International Trade Commission’s recommendations is subject to a disapproval resolution within 90 days.

"If a resolution is enacted, the ITC’s recommendation becomes the remedy and the president must proclaim in within 30 days," CRS wrote on Jan. 2.

That remedy may satisfy Sen. Ron Wyden (D-Ore.), one of the few lawmakers who has supported the tariffs sought by two companies, including one from Oregon.

He told E&E News yesterday he was concerned that the president "did not follow the bipartisan commission’s recommendations."

Sen. John McCain of Arizona, a big solar-power-producing state, said on Twitter that the tariffs amount to "nothing more than a tax on consumers." The Republican is at home while he receives treatment for brain cancer.