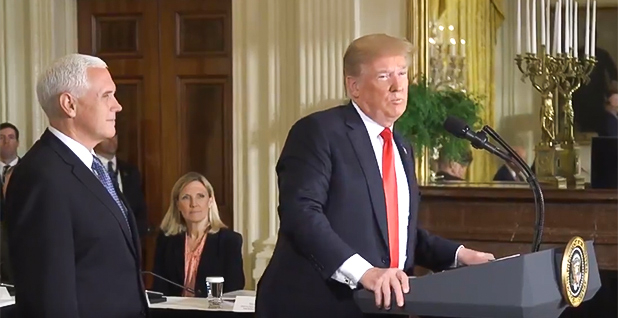 President Trump speaking at the White House this week. The president has sparked trade disputes with numerous countries. White House

President Trump’s high-speed trade fight is prompting questions from K Street to Capitol Hill about the political fallout Republicans may face in coming weeks and months.

The White House in recent days has doubled down on imposing billions of dollars’ worth of import tariffs, triggering talks of a looming trade war and retaliatory threats on U.S. exports of agriculture, seafood, oil, coal, solar panels, batteries and nuclear reactors.

If those threats and punitive measures backfire, some observers and politicians believe the farming and energy sectors — and the Republican lawmakers those industries are tied to — will face the consequences.

"This is a nightmare waiting to happen for this administration," said one Washington, D.C.-based trade policy lawyer and lobbyist who asked not to be named. "The steel and aluminum tariffs are hitting the supply chain, and now these retaliatory tariffs are hitting finished goods. Politically, that’s a dangerous combination."

The president yesterday spoke at length about the need to take a tough stance on countries like China and allies like Canada, blaming deficits on decades of unfair trade.

"We can no longer be the stupid country," Trump said at the National Federation of Independent Business’ 75th anniversary celebration in Washington. "We want to be the smart country."

But the whiplash strategy has also riled manufacturers, farmers, oil and gas producers, and even coal companies now eyeing Chinese retaliation. And while some of the loudest opposition has come from the Corn Belt, a key Trump constituency, Republicans and Democrats from energy- and agriculture-rich states are also publicly fretting over the effects on their districts.

Democratic Sen. Heidi Heitkamp told E&E News yesterday that her home state of North Dakota faces a triple whammy with effects on agriculture, the oil patch and its manufacturing hub that produces equipment for farming and construction — costs tied to steel now subjected to tariffs.

Heitkamp, who has often sided with the president, also voiced concern about China’s threat to impose retaliatory tariffs on U.S. crude, given the Asian nation is the third largest market for American crude.

"Can that be displaced by other sources, and the answer is yes," Heitkamp said.

Senate Environment and Public Works Chairman John Barrasso (R-Wyo.) said yesterday he’s communicated his concerns over Trump’s trade policies directly to the president and pledged to work with the administration on the best way forward.

"When you’re in the middle of a trade war, that’s what happens, you get retaliatory techniques and it hurts the economy," Barrasso said.

Other Republicans are mulling legislation and waiting to see what happens next. Expressing concern for jobs in his gas-rich state of Louisiana, GOP Sen. Bill Cassidy said he’s open to legislation for tackling the tariff issue but wants to see any final language.

Senate Energy and Natural Resources Chairwoman Lisa Murkowski (R-Alaska) yesterday said she planned to meet with her staff to assess the cumulative effect of Trump’s trade moves on her home state.

Trump’s steel and aluminum tariffs could significantly raise the cost of the natural gas pipeline Alaska wants to build from its North Slope, while also threatening cost overruns for military infrastructure projects planned in the state, she noted. Furthermore, a trade war threatens Alaska’s seafood industry.

"We in Alaska don’t export a lot, but our market is Asia, and in so many respects our market is China," she told E&E News. "So this could have considerable impact."

The political reality was summed up by Republican Sen. Cory Gardner of Colorado, who leads the National Republican Senatorial Committee, the national fundraising arm dedicated to expanding Republican ranks in the Senate. Gardner at first said he was concerned about the effect on Americans — and not votes — before acknowledging a direct correlation.

"If people are feeling it in their pocketbook, that matters," he said.

How much — and when — people might feel it in their pocketbooks is an open question, but the threat of a trade war has already triggered a grass-roots reaction among energy and ag interests.

After Trump announced $50 billion in new fees last week, China retaliated with planned 25 percent tariffs on dozens of agricultural products, including apples, corn and soybeans. China is the largest market for U.S. soybeans. One economist told The Des Moines Register the recent round of tariffs could cost Iowa farmers up to $624 million.

Brian Kuehl, executive director of Farmers for Free Trade, called the farming threat "downright scary" in a statement. The nonpartisan group plans to hold town hall meetings across the country and launched a series of ads opposing tariffs with the U.S. Apple Association in Washington, D.C., and in agriculture states.

Farmers for Free Trade is part of a larger coalition of manufacturers, retailers, technology companies, agribusinesses and other supply chain components calling on Congress to take a more aggressive oversight role of White House actions, despite reluctance from the GOP to directly challenge Trump.

Ahead of a Senate Finance Committee hearing on the issue today, more than four dozen industry groups including the American Petroleum Institute, American Chemistry Council, American Exploration and Production Council, and Independent Petroleum Association of America called for help earlier this week.

Kondik noted that then-presidential candidate George H.W. Bush underperformed across the heartland in the 1988 presidential elections largely because of lagging economies in many farm states in the latter years of the Reagan administration.

"In other words, if this trade war develops and if it damages the agricultural economy, there could be political consequences in 2018, 2020 or both, and that could extend to other types of states who see economic troubles that can be traced back to certain tariffs," Kondik said.

Solar tariffs implemented by Trump are also expected to be felt in many purple states, including North Carolina, Nevada, Colorado and Florida.

The president’s supporters say that the tariffs are rejuvenating the solar manufacturing sector, including in swing states. In March for example, China-based JinkoSolar announced that the opening of its first U.S. factory in Jacksonville, Fla., would create 200 direct jobs and support "hundreds" of additional jobs in shipping and related industries. The company tied its decision to tariffs.

Stefan Schauss, CEO of Canadian-based Enerox CellCube Energy Storage Systems Inc., said in an interview today that the trade situation makes it more likely his company will build an assembly plant in the U.S., even though its vanadium battery technology is not currently covered by tariffs.

"We don’t know what’s coming next," he said.

Yet the solar industry says that any job gains from new manufacturing will be far offset by job losses around the country. The Solar Energy Industries Association has projected 23,000 jobs could disappear this year alone.

In states like Nevada, the tariff issue is not high on the radar yet of voters but could have negative effects on Trump and various Republicans linked to him, considering broad support in the state for expansion of renewables, said Eric Herzik, a political scientist at the University of Nevada, Reno.

"This is an issue with some legs and more legs in some places like Nevada than in other states. It won’t displace more major concerns such as the economy or immigration, but could chip away at Republican support among nonpartisan voters," Herzik said.

At the same time, the tariff issue isn’t easily divided by party. Sen. Dean Heller (R-Nev.), for instance, is the co-sponsor of the first legislation in the Senate to repeal Trump’s solar tariffs.