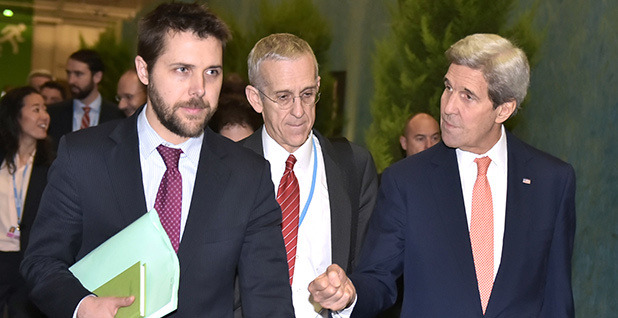 "Given Brian’s performance in those other priorities, I don’t think it’s particularly surprising that he would be tapped for this responsibility, too," he said.

"But Brian certainly deserves a lot of credit," said Earnest. "And in terms of moving that over the finish line, Brian played a key role here in the White House."

But the U.N. climate talks were not in the bag when he left, and the process has a history of delivering false starts and disappointments.

It was left to the U.S. team led by the State Department and White House — which suddenly included a 37-year-old Deese — to negotiate a deal that was both ambitious and carefully written to avoid Senate participation.

While some critics argue the deal wasn’t strong enough, it did keep the U.N. process alive.

Nathaniel Keohane, vice president of global climate at the Environmental Defense Fund, said Obama has shown his confidence in Deese, both in entrusting him with the task of delivering in Paris and now in securing a Supreme Court nominee.

"If the president had anything in the White House he needed doing quickly, he’d ask Brian," said Keohane, who worked with Deese at the National Economic Council (NEC) during Obama’s first term.

The "pattern of calling on Brian" began in the first year of the Obama administration, Keohane said, when he took a lead role in the new White House’s effort to shore up U.S. auto manufacturers — something Obama frequently cites as a top economic accomplishment.

He also took lead roles at NEC and the Office of Management and Budget before taking the top climate position that Podesta had created for himself.

"The fact that Brian didn’t miss a beat when Podesta left and has been able to deliver these remarkable achievements makes the Supreme Court assignment not a complete surprise," said Paul Bledsoe, a former climate official in the Clinton administration.

Bledsoe said Deese’s appointment shows not only the confidence Obama has placed in Deese’s abilities but also the importance of his climate policy expertise.

"I think it just shows that climate change remains a top-tier policy item for the president," he said.

The future of the Clean Power Plan could ultimately depend on who replaces Scalia, whose final official act in February was to join a five-vote majority in delaying implementation of the Clean Power Plan. A court with a liberal majority could ensure the survival of the rule, which aims to cut power-sector emissions by 32 percent compared with 2005 levels by 2030. It would also help deliver the administration’s commitments made in Paris.

Pete Ogden, a senior fellow at the Center for American Progress, noted that many saw the stay as a "signal of concern for whether the Supreme Court would ultimately uphold" the rule.

With Deese now spearheading the search for Scalia’s successor, there’s no possibility that issue will be forgotten in this process, he said.

But the White House faces very long odds in persuading the GOP-controlled Senate to consider any nominee before November’s election. Republican members of the Senate Judiciary Committee have all signed a letter stating they will not hold a hearing on any Obama nominee, and Majority Leader Mitch McConnell (R-Ky.) visited with the president yesterday to reiterate his opposition to holding votes on the nominee.

Ogden notes that making breakthroughs in difficult negotiations seems to be a strong suit for Deese.

But while parties to the U.N. Framework Convention on Climate Change may have their differences, last year’s conference never descended into gridlock. The same may not be true of election-year politics in Washington, D.C.

Jeff Holmstead of Bracewell LLP, who was involved in vetting candidates for the high court when he served in the White House counsel’s office during the George H.W. Bush administration, said choosing Deese for this task might be viewed by some as a political maneuver.

The White House counsel’s office and the Justice Department usually do this work, he said. Deese has a degree from Yale Law School but is not an attorney.

"It is unusual to have a non-lawyer in charge of selecting candidates to serve on the Supreme Court," said Holmstead.

"Given Brian’s lead role in promoting various climate change initiatives and the fact that the Supreme Court will ultimately decide the fate of the president’s Clean Power Plan, some people speculate that putting him in charge of the selection process is a way to reassure the environmental community that the White House is looking for candidates who will vote to uphold the Clean Power Plan," he added.

Deese is not giving up his day job. The White House said yesterday that he will continue to oversee and advise the president on climate, energy and conservation issues and carry out other duties during the nomination process.