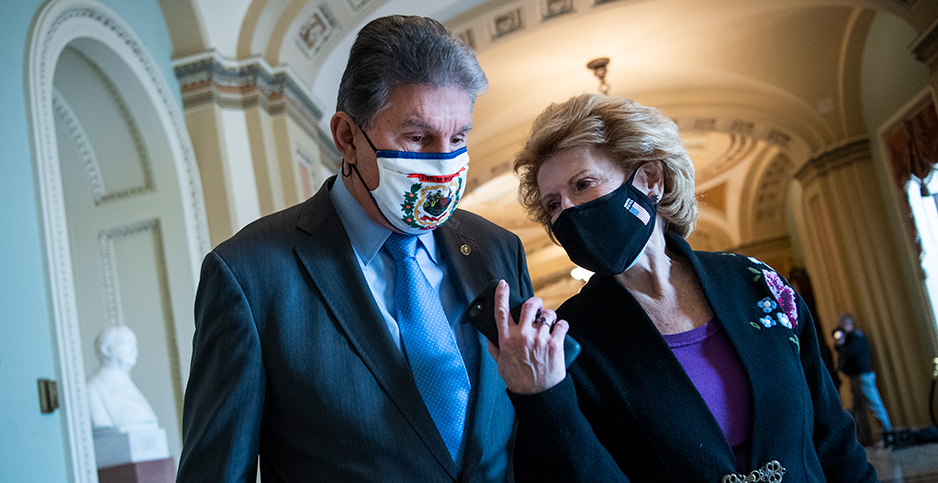 Democrats are looking to revive a dormant clean energy manufacturing tax credit that may become a pivotal policy lever for a cohesive climate package to come together.

The duo had long been working on a proposal to update the credit. The legislation would set aside half of its allotment for communities near a recently shuttered coal mine or power plant. That could free up nearly $4 billion in investment for distressed communities.

"A lot of the people who built America, whether it be the coal that we mined that made the steel and all the ingredients that made the cars, they would love to stay in their home areas if they could," Manchin said during an online press conference yesterday. "And as the transition goes on — and the transitions are going on as we talk — we want to make sure there is an opportunity."

The 48C credit was part of the Obama stimulus in response to the 2008 financial crisis. The incentive provided a 30% credit for investments in 183 manufacturing facilities for clean energy products across 43 states.

In total, the credit spurred $2.3 billion in federal investment and was eventually over-prescribed 3 to 1. The program prompted nearly $7.5 billion in private investment, according to Obama-era accounting.

With such results, an expansion of credit has long been on Manchin’s radar, especially as he looks for a policy lifeline to keep his state’s energy economy afloat in a low-carbon world.

One of his core demands when considering climate action is that West Virginia energy workers, who have long provided the natural resources to power the 20th-century defense and economic boom, would have a role in the new clean energy economy.

As early as January, Manchin listed 48C legislation as among his priorities this Congress, even as he expressed skepticism about broader climate mandates like a carbon tax or a clean energy standard, which some Democrats see as a way to meet net-zero emissions by 2050.

"Sen. Manchin has shown that he cares about advancing clean energy and has some ideas about how he wants to do that, and if people are interested in securing his interests and support for a larger package, they should be paying attention to things like 48C and other clean energy proposals that he is championing," said Ryan Fitzpatrick, director of the climate and energy program for the centrist group Third Way.

That bill — with extensions of renewable tax credits and energy efficiency incentives — has ambitions to join the broader infrastructure effort later this year.

Senate Finance Chairman Ron Wyden (D-Ore.) also remains supportive of the effort. "Senator Wyden has included an expansion of 48C in his tech-neutral legislation in the past, and the Stabenow/Manchin legislation is consistent with Senator Wyden’s goals," said spokesperson Ashley Schapitl.

Stabenow was an original co-author of the tax credit when it first passed as part of the 2009 recovery package, and Michigan ended up being one of the program’s biggest beneficiaries.

"It’s not only the right time, but we know that it works because we used this 48C tax credit one other time," Stabenow said yesterday. "When we passed it, it just exploded. It was extremely successful."

As flagged by Energy Secretary Jennifer Granholm — a former Michigan governor — during her confirmation hearing, that tax credit, along with some other incentives, helped the state become one of the world’s leaders in battery technology production, with one-third of domestic supply coming from the state.

A dozen Michigan companies received about $242 million in 48C credits, about 10% of the total awarded and more than any other state.

Those Michigan companies were able to build out facilities dedicated to semiconductors, battery parts and other electric vehicle components.

Merrill Tool and Machine in Saginaw, Mich., used the $22 million in 48C tax credits to diversify its manufacturing capabilities into wind turbine manufacturing. That prompted a visit from Granholm in 2010.

Later that year, Granholm joined a bipartisan coalition of governors across the country calling on the Obama administration to extend and expand the credit to help in the manufacturing recovery.

In a March 2010 letter, Granholm and other governors called the credit essential to supporting "new waves of domestic production and innovative new jobs and careers." The Obama team responded by suggesting Congress extend the tax credit with an additional $5 billion in incentives.

Stabenow and Manchin think their proposal could attract bipartisan support because many districts that stand to benefit are in GOP hands.

With shuttered mines and plants in areas spanning the Midwest, Appalachia and Rocky Mountains, the need touches Americans of all ideologies, they said.

"Working across the aisle is what we do," Manchin said. "We have a good group of people who want to work together and understand the challenges."

Stabenow did blame Senate GOP control for the credit’s lapse at the beginning of 2015. With criticisms mounting over renewable energy subsidies, Republican leadership opted to let the incentive expire.

Getting critics on board may prove difficult. Energy and Natural Resources ranking member John Barrasso (R-Wyo.), during Granholm’s confirmation hearing, complained about misused federal monies during her governorship.

Granholm called those reports inaccurate. She added that federal investment, while not perfect, helped the United States compete against Chinese-backed energy companies.

"States individually are bringing a knife to a gunfight, and without a federal partner in making sure that we can get these jobs in America, then we will be losing globally," Granholm said.