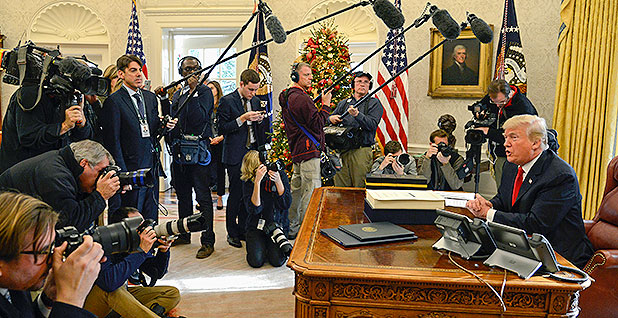 President Trump speaks with the press last month after signing the $1.5 trillion tax cut bill in the Oval Office of the White House. Mike Theiler/picture-alliance/dpa/Associated Press

President Trump shut the books on sweeping tax reforms in the final days of 2017 when he signed the $1.5 trillion Tax Cuts and Jobs Act. But for utilities, consumer advocates and state regulators, the work is just starting.

Corporations across the country will benefit from a tax rate reduction from 35 percent to 21 percent. For many, shareholders will be expecting a small windfall. For utilities, it’s energy consumers who will expect to see the rate cut in the form of lower electric bills.

The process is already underway in some states. Chicago-based Commonwealth Edison Co., for instance, filed with state regulators on Friday to reduce rates by $201 million this year. The reduction equals $2 to $3 a month for the average residential customer, the utility said. Utilities and regulators elsewhere are gearing up to make similar adjustments.

And in Oklahoma, administrative law judges last week indicated support for tracking savings that could be passed along to customers of five utilities. The state attorney general’s office estimated the cumulative savings could be about $100 million.

But those actions to cut rates are only part of the challenge awaiting state regulators. A potentially thornier issue is deciding what to do with billions of dollars in deferred income tax balances on utilities’ books. And jockeying among utilities and consumer interests has already started.

In the simplest terms, deferred taxes reflect the gap in timing between when utilities collect revenue from ratepayers for their federal income taxes and when they’re paid to Uncle Sam. If the federal tax rate stays the same, the timing difference reverses over time and the money collected from ratepayers is ultimately paid to the federal government. But the tax cut means some of those taxes collected through rates are no longer owed.

How much is held by utilities nationwide in excess deferred taxes isn’t immediately known. But a 1991 Government Accountability Office report estimated that following the last corporate tax rate cut in 1986, privately owned public utilities’ excess deferred tax balances neared $18 billion nationally. About half that amount was related to electric utilities.

Experts agree today’s total is likely to be much greater. So it’s no wonder that consumer groups are staking a claim and urging regulators to put refunds in motion.

A piece of the ‘windfall benefit’

In David Springe’s view, the moment the tax bill was signed into law, it meant a portion of those taxes paid by utility ratepayers went from a utility liability to a consumer liability.

"That’s a huge concern of a lot of our members," said Springe, head of the National Association of State Utility Consumer Advocates.

In Kansas, for instance, industrial energy users filed a pre-emptive complaint with the state utility commission a week before Congress passed the tax bill, on the assumption it would get done.

"The near certainty of tax reform … necessitates immediate Commission action," the complaint said.

Oklahoma Corporation Commissioner Bob Anthony, among the most outspoken state utility commissioners on the topic, said regulators should consider flowing all benefits of the tax cut back to ratepayers, including deferred taxes.

Analysts and tax experts said regulatory treatment of deferred taxes is a huge issue for the utility industry. And they generally agree that the bulk will ultimately be refunded to customers.

Robin Miller, a tax partner at accounting giant PwC in Chicago, said the law is clear with respect to the treatment of certain deferred taxes.

Miller said the tax law requires that deferred taxes tied to utility assets such as power plants and transformers be remeasured at the new rate, with any excess returned to customers.

The law isn’t specific regarding treatment of other excess deferred taxes, so states have more discretion over whether and when they’re refunded, she said.

The last time that many state commissions grappled with the deferred tax issue was 1986, when Congress voted to cut the corporate tax rate to 34 percent from 46 percent. At the time, most states required all excess deferred taxes to be refunded, Miller said.

Paul Patterson, a utility analyst at Glenrock Associates LLC, agreed that the benefits of tax reform, including deferred taxes, will mostly accrue to customers rather than shareholders.

"But that doesn’t mean the mechanics of that will be simple," he said. The amount of debt a utility has, whether it has nonregulated operations, and how the lower tax rate affects the rate base may complicate the issue.

Even if regulators agree that excess deferred taxes should be refunded to consumers, the timing of such refunds will be an issue. But it may be less of an issue because of rules that utilities lobbied hard to keep in the law.

But the utility industry prevailed and convinced Congress to include so-called normalization rules that require plant-related deferred taxes to be refunded to customers over the life of property.

"It’s a lot of money, which is why utilities worked so hard on the Hill to have that normalization language put in," Springe said.

An Edison Electric Institute policy briefing explains why the issue is so important to the industry. The group notes that "generally, if excess deferred taxes are returned to the customers immediately, the utility’s cash flow is sharply reduced."

Deferred taxes also benefit ratepayers by reducing the size of utility rate bases, the value of property on which the companies are allowed to earn a profit.

"Reducing the value of [deferred taxes] as an offset to rate base could, all else being equal, result in higher rate base values in most jurisdictions," the white paper said.

PwC’s Miller agreed. "Over time, their rate base, in theory, is going to go up as these excess deferred taxes get passed back," she said. But the ultimate effect will vary by company and state.

"It’s certainly not one-size-fits-all," she said. "I think it’s going to be a company-by-company analysis. It may depend on how regulators flow back some of these other items where they have discretion."