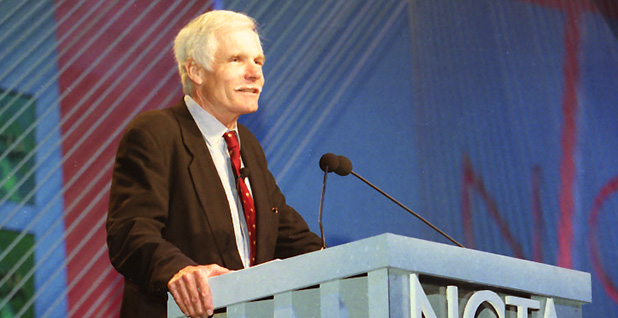 "As the nation’s largest private landowner, I would like to express my strong support of John Berry for appointment as Interior Secretary," Turner wrote in the email allegedly hacked from Podesta’s personal account and released by the group WikiLeaks.

"Never in our history has it been more important to protect our national resources," Turner wrote, "and Mr. Berry has the unique combination of passion, experience and expertise to oversee the Department of the Interior at this critical juncture for our environment."

The Interior job ultimately went to former Colorado Sen. Ken Salazar (D), and Berry was appointed the director of the Office of Personnel Management. He’s now serving as the U.S. ambassador to Australia.

Rahm Emanuel, who became Obama’s chief of staff, had also told Podesta to look into Berry for the Interior job, according to a November 2008 email.

"Rahm wants to look at John [Berry]" for Interior, the email said. "Guess he’s been getting calls about him."

Recommendations abounded for possible Interior secretaries in 2008, the emails reveal.

Then-Arizona Gov. Janet Napolitano (D) wanted Scott Matheson of Utah to get a "serious look as a possible Secretary of the Interior," she told Podesta in an email.

"The Mathesons are a well known Utah family. Scott is an attorney, former dean of the University of Utah Law School, and served as U.S. Attorney for Utah for most of Clinton’s presidency. I worked with him in that capacity, and he is terrific," she wrote. "He is quiet, but when he talks, people listen. He is smart, and has excellent judgment and the ability to balance competing interests — a must for an interior secretary."

Matheson is the son of a former Utah governor of the same name, and the brother of ex-Rep. Jim Matheson (D-Utah).

There was plenty of jockeying for other posts in the fall of 2008, a process that’s likely to begin in earnest once the winning presidential candidate’s transition team begins to fill out its roster after Election Day (see related story).

In October 2008, Cathy Zoi suggested that perhaps she should work in the Federal Energy Regulatory Commission.

She said in an email to Podesta, "During the discussion about the importance of the grid and the historic inability of FERC to get anything truly groundbreaking done, Carol [Browner] had a thought which I’ve now gnawed on for a day and a half: perhaps I could help the Obama Administration realize the President’s vision on clean energy by leading the charge on grid modernization from FERC."

She added, "I’m not sure who else you’ve got in mind, and I haven’t been jockeying for Administration posts, but (corny as it sounds) if my skill-set matches the need it would be honor to help President Obama."

Zoi, who had previously worked for Al Gore at the Alliance for Climate Protection, served in the Obama administration as assistant secretary for Energy Efficiency and Renewable Energy.

In late 2008, several Obama aides wondered where to put Jason Grumet, who had been an energy adviser to Obama on the campaign trail.

According to an email from David Hayes, Grumet had appeared irritated when asked to be the co-chairman of an Energy Department review team. Grumet had questioned why he wasn’t on the broader central policy team.

Podesta wrote to Denis McDonough — now Obama’s chief of staff — and Pete Rouse, who had been Obama’s Senate chief of staff, saying, "Do we owe this to this guy? Will he [take] direction from Carol [Browner]?"

McDonough offered to check into "what we owe him," but Podesta wrote back, "Don’t do that yet."

McDonough said to Podesta, "That guy is a prick. I will solicit the right answer … but not til you ask. Hang in, man."

He added, in what appears to be a reference to GOP Arizona Sen. John McCain’s presidential campaign, "These rat fuckers are flailing. Three press releases from [Scheunemann] in the last 3 hours." Randy Scheunemann was a foreign policy aide to McCain’s campaign.

Grumet said today in a statement, "The fact that there is competition for jobs in a new Administration is hardly a revelation, but the publication of private interactions is an assault upon our ability to govern."

Podesta and the Clinton campaign have not verified the authenticity of the hacked emails. The campaign and the Obama administration have accused the Russian government of orchestrating the emails’ release in an attempt to influence the U.S. election.