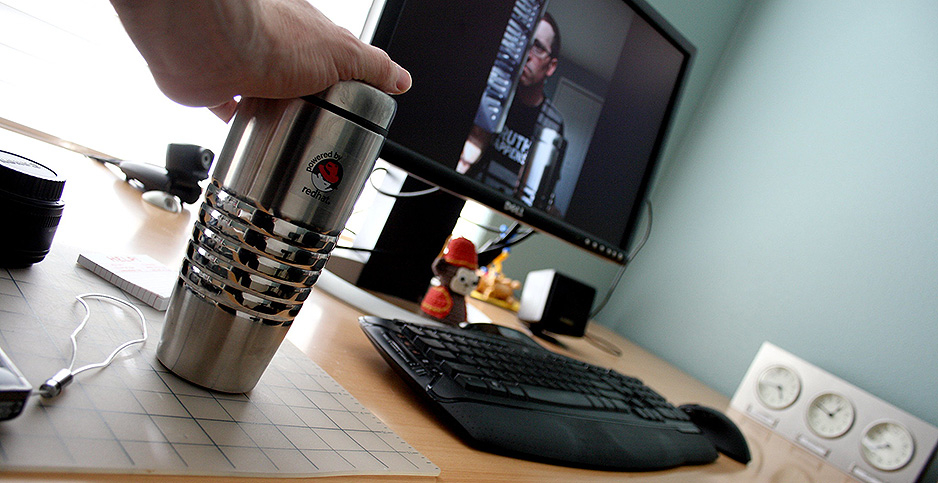 Economists and environmentalists say the coronavirus pandemic could usher in a new era of teleworking — a societal shift that would have a significant impact on carbon emissions. Mike McCune/Flickr

The coronavirus pandemic has the potential to permanently boost the popularity of telecommuting, say workplace experts — a societal shift that would have a profound impact on U.S. climate emissions.

Due to the outbreak, millions more Americans are doing their jobs from home. And thanks to advances in technology — and a little nudge from widespread stay-at-home orders — the temporary fix could become much more commonplace.

The shift in lifestyle would represent a major climate victory, said Harriet Tregoning, a former senior official in the Obama administration at the Department of Housing and Urban Development. She helped cities plan for climate change.

Fewer daily commuters would lead to a drop in vehicle emissions and traffic congestion, Tregoning said. It also could open up more urban streets for use by bicycle commuters or for public transportation.

"I think it will really change people’s attitudes about what’s possible to get done with remote work, ditto for work travel, and all these things could have a salutary effect on climate change," said Tregoning, who is now director of the New Urban Mobility project at the nonprofit World Resources Institute.

The pandemic has prompted a number of societal changes — from a rise in bicycle commuting to a relaxation on regulations for telemedicine.

None of those shifts, however, has the climate potential of taking cars off the road. Transportation accounts for about a quarter of U.S. greenhouse gas emissions. And the vast majority of employees around the country — 86% — commute to work in a private vehicle, according to the U.S. Census Bureau.

But there is still plenty of untapped potential in telecommuting. Much of the country has connected to high-speed Internet in recent years, and yet only a small share of the workforce has shifted to teleworking, said Kate Lister, president of Global Workplace Analytics, which tracks telecommuting trends.

Before the pandemic, about 4% of U.S. employees worked from home, according to data collected by the firm. Now more than half the 135-million-strong U.S. workforce is doing so, according to Global Workplace Analytics.

Managers, she said, would be key to whether the trend continues post-pandemic.

"The biggest difference in support are managers that have not done it and those that have done it," Lister said. "So the longer this goes on, the more managers will be comfortable with seeing, ‘Oh hey, they are really working; I can tell what they’re doing. They’re not going to be sitting on the sofa eating bonbons."

A greater number of employees and managers are now realizing they don’t have to come to the office every day, she said. But the coming shift to telework also could be driven by simple economics, she said. Employers looking to cut costs amid a recession might see large unused office spaces — which they spent months operating without — as a liability and a place to cut costs.

About half of the U.S. workforce has a job that can be performed at least partially at home, Lister said. Even if, after the pandemic, millions of Americans return to an office, many more will see working from home as a viable option.

By the end of 2021, Global Workplace Analytics estimates that 25% to 30% of the total U.S. workforce would telecommute. If those who hold jobs where it is possible to work from home at least part of the time do so, it would be the greenhouse gas equivalent of taking all of New York’s workforce permanently off the road, she said.

"Sustainability has been made visible; in a very short period of time, we see that the air is cleaner and that the water is cleaner," Lister said. "It’s just really hard to deny that remote work isn’t a major part of the solution."

Others feel that the climate implications of increased telework are not so clear-cut.

The presumed emissions cuts could be undermined if they mean more people choose to live in the suburbs because they no longer face long commutes into a city for work, said Gernot Wagner, a climate economist at New York University. Suburban life generally means less efficient housing, and it’s often easier to have a low-carbon footprint in a city environment.

"The flip side [of more telecommuting] is that there are lots of us who live in the city near our work for good reason. I can easily see that this means there will be fewer people living in a 400-square-foot walkup studio, because why do it? So here comes the ‘burbs — you live out there with a two-car garage and four bedrooms," he said. "So honestly, the climate impact overall, I have no idea."

Returning to a culture that devalues public transit and increases suburban sprawl is one of the biggest risks of this climate moment, said Brent Toderian, who was the chief city planner for Vancouver, British Columbia.

He said it will be "throwing gas on the fire of the climate emergency" if the reaction to COVID-19 is a new fear of cities — as city living often means a reduced dependence on fossil fuels.

One option is for cities to rethink traffic flow, Toderian said. He pointed to Oakland, Calif., which recently closed off 10% of its streets so they could be used by pedestrians and bicyclists. It is a time for city planners to reimagine public spaces, he said.

Toderian added that an increase in telecommuting also could have an impact on home and office design.

Ultimately, the motivation for a different way of living could be driven by an emotional response to the COVID-19 crisis. "We may just need more breathing space," he said.