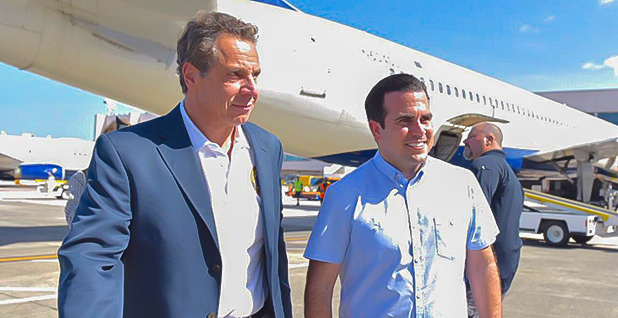 The outlook for the restoration of Puerto Rico’s ravaged power grid took a backward step after Gov. Ricardo Rosselló hinted he would challenge the appointment of an emergency manager for grid recovery that was announced Wednesday by the bankrupt island’s federal oversight board.

The Puerto Rico Financial Oversight and Management Board, which Congress established to oversee the U.S. territory’s fiscal crisis, had moved to wrest control of the halting grid recovery efforts away from the island’s utility, the Puerto Rico Electric Power Authority (PREPA), which reports to Rosselló.

But in a combative statement following that announcement Wednesday, Rosselló asserted that the management of Puerto Rico’s public companies "rests exclusively on democratically elected officials," potentially setting the stage for a legal tussle over the utility’s future.

The board picked its revitalization coordinator, Noel Zamot, a retired Air Force colonel and native Puerto Rican, to serve as "chief transformation officer" for emergency power restoration and future, undefined efforts to build a more modern, resilient power network on the island.

"Zamot will lead the transformation of PREPA and the rebuilding of the electricity sector," the board said.

Rosselló, without mentioning Zamot by name, suggested in a statement that the board had intruded on commonwealth statutes.

"The people of Puerto Rico have entrusted to their elected Government the sound administration of their funds and governmental entities," he said, "and the Government of Puerto Rico will be zealous in defending the People of any action that seeks to undermine this process, whence it comes."

If the governor takes the issue to court, it will set up conflict with the Puerto Rico Oversight, Management, and Economic Stability Act (PROMESA), enacted by Congress in June 2016.

A spokeswoman for the governor did not respond when asked if the governor planned specific legal action following the board’s decision.

PREPA’s management of grid restoration following Hurricane Maria’s devastating strike last month has triggered demands from congressional committees for an accounting of its actions during the recovery.

The House Energy and Commerce Committee is pressing for a play-by-play accounting of the $300 million contract PREPA signed with Whitefish Energy Holdings LLC, a small Montana-based energy services firm chosen by PREPA to organize utility repair crews from the U.S. mainland.

The committee is seeking details of the actions by the company and its subcontractors, in advance of a scheduled Nov. 9 review.

Sen. Maria Cantwell of Washington, lead Democrat on the Senate Energy and Natural Resources Committee, and Sen. Ron Wyden of Oregon, ranking Democrat of the Senate Finance Committee, have asked the Government Accountability Office to investigate the Whitefish contract.

PREPA CEO Ricardo Ramos never directly sought support from U.S. mainland utility repair crews organized through the American Public Power Association before and after Maria’s landfall. Ramos told E&E News that his bankrupt utility, with $100 million on hand, could not make the multimillion-dollar upfront payment that he said one U.S. grid services crew had insisted on. Whitefish said it did not demand an advance payment.

The union draws a line

If the governor battles the federal oversight board’s choice for new leadership at PREPA, it will get no support from PREPA’s electricity workers’ union, the Unión de Trabajadores de la Industria Eléctrica y Riego (UTIER).

Yesterday, the head of the union, Ángel Figueroa Jaramillo, said in an email that federal overseers are legally able to unseat PREPA’s board and its CEO. "This action by [PROMESA] confirms UTIER’s denunciations of the bad management, corruption and incompetence of the management and of Ricardo Ramos during the emergency occasioned by Hurricane Maria," Jaramillo wrote.

The union opposes PROMESA’s control of the utility, while also opposing the governor’s effort to keep the utility’s leadership in place, Jaramillo said. The union’s preferred route, he added, is that the governor dismiss and replace Ramos and PREPA’s senior leadership.

Ramón Luis Nieves, a former commonwealth senator, said the federal oversight board is under a mandate to bring private capital to the island to boost economic activity — not just in electricity but generally. Selling off some or all of PREPA’s assets has long been a part of that conversation, but a more detailed plan hasn’t been sketched out.

"I understand that if the oversight board prevails and the appointment of Zamot is not overturned, that will be the last nail in the coffin of PREPA," he said.

But Nieves called the privatization of the utility "an empty concept" until details are put down on paper. Does privatizing mean the entire utility is sold off, or do pieces remain under public control, such as distribution services?

While Nieves acknowledged that the political issues around Puerto Rico’s grid management are crucial, he added that they are not on the front of Puerto Ricans’ minds. The more important issue is that, despite the government’s reports that more electricity is being served, the vast majority of homes and businesses are still dark.

"That discussion is still not in the political dialogue of the people because we are in emergency mode," he said. "We have no power."

According to Fernando Padilla, PREPA’s financial restructuring officer, the power authority had about $500 million on hand to address "immediate needs based on priorities," five times the figure Ramos cited for his reason why the utility had to choose a rebuilding partner who wouldn’t demand an upfront payment, such as Whitefish.

Tom Sanzillo, finance director for the Institute for Energy Economics & Financial Analysis in Puerto Rico, a business and environmental advocacy group, said "I think the board’s authority to do this [appoint Zamot] is pretty explicit."

The PROMESA legislation gave the oversight board authority to oversee Puerto Rico’s "public agencies," which would define PREPA.

Rosselló needs to see the oversight board as his partner, not his opponent, Sanzillo added.

"There are times when a governor has to draw a line" with Washington, said Sanzillo, former acting comptroller of the state of New York. "But this is a fight over something that screams out for oversight. He’s trying to defend a system that has produced one bad contract and one bad decision after another. He’s just wrong."

Clarification: UTIER’s Jaramillo said the union opposes PROMESA’s control of PREPA as well as the governor’s effort to keep the utility’s leadership in place.