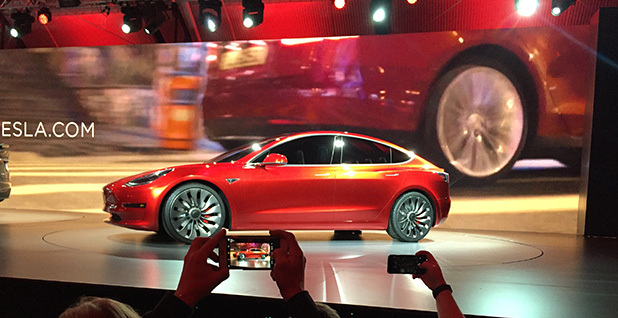 Tesla and its CEO, Elon Musk, yesterday averted a shareholder rebellion and announced progress in delivering its mass-market sedan while teasing other developments.

Production of the Model 3 was a focus of Tesla Inc.’s annual shareholder meeting, held in Silicon Valley. Musk said that production has risen to 500 cars a day, or 3,500 a week. That is an improvement over early April, when the company was producing just over 2,000 units, and is a marker toward the 5,000 per week that Musk has promised by the end of June.

Musk, looking tousled in a motorcycle jacket and T-shirt, exhibited only flashes of his trademark swagger. Confidence among investors and customers has wavered this year amid production problems for the Model 3, a make-or-break vehicle for the young electric automaker.

The company’s stockholders voted down independent shareholder proposals that would have curtailed Musk’s control.

One would have unseated Musk as board chairman, a role he holds concurrently with CEO, and replaced him with an independent outsider. Voting also ensured a new term on the board for Antonio Gracias, a venture capitalist; James Murdoch, the CEO of 21st Century Fox; and Kimbal Musk, Elon Musk’s brother. A shareholder initiative sought to unseat them because of their lack of management and automotive experience.

A China factory. A joint auto and battery manufacturing plant will be built in Shanghai, with more details coming "as soon as next month," Musk said. These two facts — a location and joint production — put new meat on a China plan that has had few details.

An announcement about a car/battery factory in Europe will come by the end of the year, he added. "We need to figure out where to put it exactly," he said.

By the end of this year, Musk said, the company may unveil a new design for stops on the Supercharger network, with integrated solar power and battery banks. "You don’t even need to be connected to the grid," he said.

More on Model 3. Tesla has caught flak that the Model 3s it is actually delivering this year are premium models with expensive options that place them far above the $35,000 base price that is supposed to make it an affordable car.

Those low-end models will start delivery in the first quarter of 2019, Musk said.

He added that it will take the company two years to deliver on the long list of Model 3 reservations. This week, a study found that a quarter of the 450,000 or so customer deposits, of $1,000 each, have been refunded as customers have grown tired of waiting.

The company is building a third Model 3 production line in its already cramped factory in Fremont, Calif.

Roadster. Tesla’s reboot of the Roadster, a sports car that was the company’s first production vehicle, planned for 2020, has the goal of "outperforming a gas car in every way," Musk said.

"It will get rid of that halo of gas cars," he added. "That’s an important thing perceptually for the general public."

Motorcycles. A shareholder asked whether Tesla will build a motorcycle. Musk said he used to ride a dirt bike and then a road bike, but at 17 was almost killed by a truck.

"So we’re not going to do motorcycles," he said.