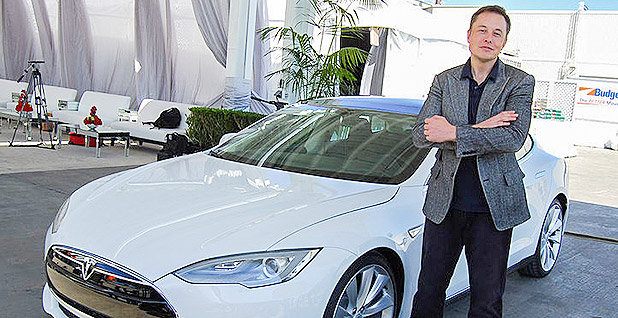 CEO Elon Musk stands with a Tesla car at the company factory in Fremont, Calif. Photo by Maurizio Pesce, courtesy of Wikipedia.

Tesla Inc., which started in 2003 as an electric car company but now seeks to conquer solar and energy storage, has officially removed the word "Motors" from its name.

The California-based company made it official in a filing with the Securities and Exchange Commission yesterday, six months after removing the M-word from its web address.

"Tesla Motors" is a term that has lagged behind the company’s evolving identity as it has made incursions into other zones of energy infrastructure. Last June, when Tesla announced its plan to acquire the country’s largest rooftop-solar installer, SolarCity Corp., it set its sights on becoming "the world’s only vertically integrated energy company" (Energywire, June 22, 2016). That merger was approved by shareholders in November.

Well before absorbing SolarCity, Tesla expanded into batteries for homes and the power grid, a sector known as stationary storage. The company’s Gigafactory, based outside Reno, Nev., originally was planned to produce strictly car batteries for Tesla’s auto factory in California. Since then, a large portion of the Gigafactory’s production has been set aside for batteries without wheels.

On Monday, a battery power plant built by Tesla was unveiled outside Los Angeles, the Los Angeles Times reported. The 20-megawatt, 80-megawatt-hour plant, made up of hundreds of refrigerator-sized boxes of batteries, is part of an effort by Southern California Edison to compensate for the closure of the Aliso Canyon natural gas facility, which was shut down when it was discovered to be leaking massive amounts of methane.

The orbit of Tesla and its CEO, Elon Musk, is ever-expanding: Tesla announced a new rooftop solar shingle even before the merger with SolarCity went through (Greenwire, Oct. 31, 2016). SolarCity has begun a wave of hiring for its giant solar panel production plant in Buffalo, N.Y., according to The Buffalo News. And just in the last few weeks, Musk has struck an evolving relationship with the new U.S. president, Donald Trump (Energywire, Jan. 30).