Tesla microgrids spread as U.S. grid ‘gets worse and worse’ 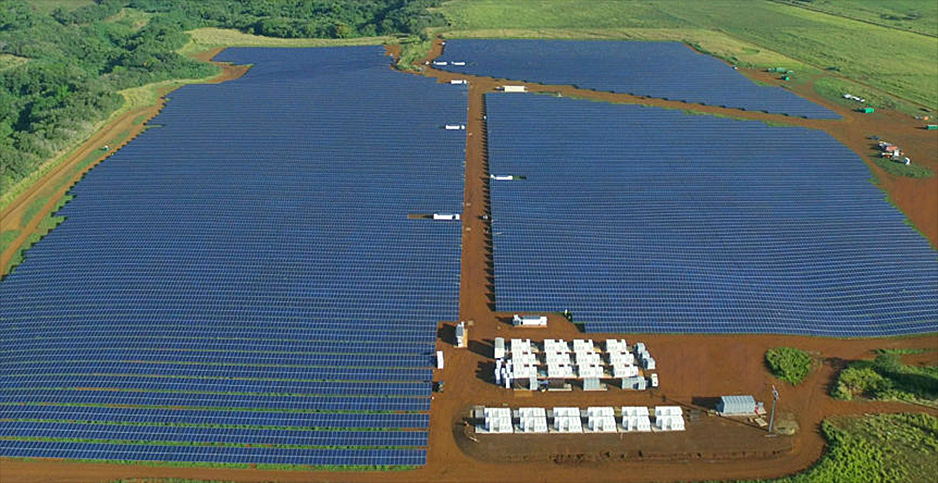 Tesla Inc. and the Kauai Island Utility Cooperative built a 52-megawatt battery storage facility and 13-MW solar farm on Kauai in Hawaii in 2017, one of more than 120 operating microgrids now in Tesla's portfolio. Helix Electric

A Tesla Inc. executive made a stir last week when he revealed that the company is operating more than 120 microgrids. The online comment by Michael Snyder, Tesla’s director of engineering and construction for energy projects, signaled that a company known for its cars and batteries is restlessly encroaching on other parts of the energy system.

But experts said Tesla is far from alone. Dozens of companies are stampeding into the microgrid space, realizing there is tremendous demand for simpler microgrids to tap clean energy and keep the lights on.

A microgrid is a cluster of energy generators — any kind, from a diesel generator to a rooftop of solar panels — that is designed to serve nearby users such as a building or a campus. That cluster "islands" and keeps the lights on even if the regular grid around it blacks out.

The need for these mini-grids has become apparent as wildfires, hurricanes and floods made more severe by climate change are often taking the grid down with them.

"If you look at the performance of the U.S. grid, it just gets worse and worse and worse," said Peter Asmus, who studies microgrids as a research director at Guidehouse Insights.

Elegant in concept, the microgrid has been devilishly hard to execute. Microgrids have spread slowly over the last decade and were accelerating until the COVID-19 pandemic snarled many projects.

Snyder gave some insight into the trend in a post on LinkedIn last week expounding on his initial comment.

Microgrids "do not always need to be considered bespoke engineering endeavors," the Tesla engineer wrote. "The vast majority can be simplified and systematized into plug-and-play power systems."

Snyder described Tesla’s microgrids as a bit like its cars: modular and capable of over-the-air updates. The same features, he said, can be found at big solar projects knitted to the grid in Australia and on the Hawaiian island of Kauai, at backup power plants for hospitals in Puerto Rico and a train network in Japan, and in tiny, isolated grids in rural Africa.

"The variety and flexibility in application is staggering," he said, adding that 1,000 Tesla microgrids are possible "in the not so distant future."

Experts said the crucial elements that Snyder highlighted — simpler, modular systems that can be monitored and updated through cloud computing — are being embraced by many makers.

Several industry players are asserting themselves in microgrids, including utilities like California’s Pacific Gas and Electric Co., Ameren Corp. in the Midwest and Duke Energy Corp. in the Southeast; energy-storage giants like Tesla and LG Chem Ltd.; makers of battery controls, like Schneider Electric and Siemens AG; companies that make battery-control software, like Stem Inc. and Growing Energy Labs Inc.; global conglomerates with power divisions, like Caterpillar Inc. and Trane Technologies; and pure-play microgrid builders like Advanced Microgrid Solutions and Scale Microgrid Solutions.

"You definitely have an increase in momentum from all sides," Asmus said.

Microgrids are still mostly powered by diesel generators, though cleaner options, especially solar systems combined with battery storage, are gaining, according to a report by consultancy Wood Mackenzie.

The typical system is also getting smaller, which usually makes it simpler and faster to build, Asmus said.

He said another accelerant for microgrids is a new rule that the Federal Energy Regulatory Commission approved in September. Called Order No. 2222, it allows energy from distributed resources like solar arrays and batteries to be sold into wholesale regional energy markets (Energywire, Sept. 18).

Many deployments are in California, to ease the use of batteries and solar arrays and to contend with the power shut-offs prompted by the state’s pernicious wildfires. Another hub is the East Coast, where microgrids arose in the wake of Superstorm Sandy in 2012.

They are also becoming more common in the Midwest, said Sean Sevilla, who manages distributed energy programs at the Center for Sustainable Energy in California.

Wood Mackenzie said the United States installed 546 microgrids last year. It added that the sector has struggled in 2020 because of disruption from the pandemic.

Building microgrids is getting easier, but barriers remain.

"It’s still complex and complicated and it is a bespoke deployment, and that’s driven by the fact that a campus may have systems of different vintages," Sevilla said.

California was poised to have a banner year for microgrids until the pandemic hit, Asmus said. The state Legislature hasn’t made it a priority to pass rules that would have made microgrids easier to implement.

Even the smallest microgrids seem to have snared the attention of Tesla, said Asmus, who said he may build a microgrid at his house on the California coast and is considering Tesla as a solution.

In a phone interview Monday, Asmus said his electricity had just gone out as utilities in the state had power shut-offs to avoid sparking fires in hot, dry October winds.

"I’d say Tesla never in the past wanted to talk to people like me," he said. "They seem to have shifted a little as of late."