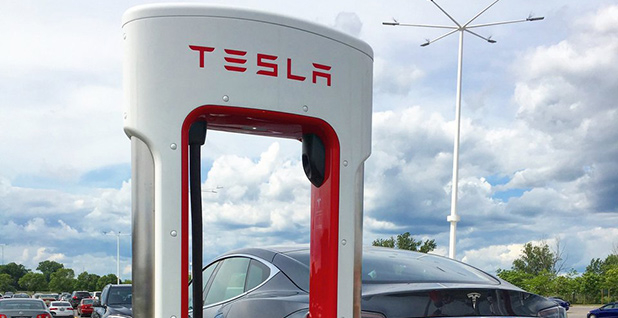 Tesla reported its second-quarter earnings yesterday as the EV maker continues to grapple with impacts from the coronavirus pandemic. @Tesla/Twitter

Financially, the clean energy firm planted a flag on Wall Street by notching a profit that sets it up for inclusion in the S&P 500. Geographically, the electric automaker laid a foundation in the heart of oil country, confirming the rumors that it will build its next factory in Austin, Texas.

The news came during Tesla’s announcement of its second-quarter results, which left lingering questions about the company’s ability to be a sustainable automaker, much less achieve its goal of becoming a global clean energy behemoth.

Yet CEO Elon Musk was in an ebullient mood as he held a call with investors.

Just the day before, he earned more than $2 billion in stock options, the result of Tesla’s recent stock rally making it the world’s most valuable automaker, despite producing a tiny fraction of the world’s cars.

With Chinese buyers snapping up Model 3s from a new factory in Shanghai and two more factories on the way, it was a day for the perpetual make or break Tesla to revel, at least for now.

The unveiling of Austin as the winner of Tesla’s factory sweepstakes plant was not fully a surprise. In the last two weeks, commissioners in Travis County and a local school board have approved tax breaks for the $1.1 billion plant.

The factory was hailed yesterday as one of the largest economic-development projects ever for a city known more for its world-class music scene than its manufacturing prowess.

"It gives us three things we need in east Austin," said Steve Adler, the mayor of Austin, in a statement.

"It gives us thousands of good wage jobs that don’t need a four-year degree. Its factory will be better for people and the planet. It’s an important economic boost in east Austin, especially as we fight the economic effects of the virus," he said.

The plant is expected to employ 5,000 workers from a 2,100-acre site near the Colorado River.

"We’re going to make it a factory that is going to be stunning," Musk said. "We’re actually going to have a boardwalk where there’ll be a hiking and biking trail. It’s going to basically be an ecological paradise."

The park — though not the factory — will be open to the public.

Musk said the Austin factory will build the sole supply of the Cybertruck, which is Tesla’s entry into the pickup truck segment, as well as the Tesla Semi tractor-trailer. It will also build the Model 3 sedan and the Model Y SUV for customers on the U.S. East Coast.

Tesla’s home factory in Fremont, Calif., meanwhile, will make Model 3s and Model Ys for the West Coast, and continue to fabricate the high-end Model S sedan and the Model X SUV for global markets.

Musk described the arrangement as "a nice split between Texas and California."

With the Austin plant, Tesla will count six factories that it has introduced at a rapid clip, by the deliberative standards of global auto manufacturing.

They include the auto factory in California, a colossal battery plant outside Reno, Nev., a solar factory in Buffalo, N.Y., and two foreign plants that make both batteries and cars: the one that opened in China earlier this year that is still being expanded and another currently under construction in Berlin.

Wall Street had been focused on whether Tesla would turn a profit.

A lot rode on this quarter: A Tesla in the black for the second quarter of 2020 would mean a yearlong streak of profits, which would qualify the company for inclusion on the S&P 500, the realm of blue-chip market leaders.

For clean energy advocates, the addition of Tesla to the S&P means that it has arrived at respectability. For Tesla itself, it means dollar signs since many institutional investors automatically calibrate their portfolios to the S&P.

Many analysts predicted that Tesla would fall short, but its soaring stock price — increasing in value more than fourfold since March to a closing price of $1,592 yesterday — had investors hoping for more.

The result was a profit of 50 cents per share, enough to qualify for the S&P 500, though no announcement of Tesla’s membership is yet forthcoming.

The narrow profit is raising doubts for others.

It "speaks to a business model which continues to have significantly lower costs and more production efficiency even in the face of challenging circumstances globally given COVID-19," wrote Wedbush Securities analyst Dan Ives in a note to investors.

Other Tesla watchers noted that Tesla’s revenue of almost $5.2 billion has remained flat even as the stock has taken flight and questioned Musk’s assertion yesterday that "demand is not a problem."

A persistent question about Tesla is whether there is sustainable worldwide hunger for its vehicles, once it becomes affordable and available enough for a core of EV enthusiasts.

"Musk says demand is not a problem, but Tesla has been lowering prices," tweeted auto analyst E.W. Niedermeyer.

Other analysts wondered whether Tesla is relying for its profits too heavily on credits it sells to other automakers, instead of the sales of its cars.

Every automaker gets a 200,000-vehicle cap under the federal tax credit for electric vehicles. Past that cap, a car buyer can no longer claim that $7,500 credit. Tesla, as the leading seller of electric vehicles, has exceeded the cap and Tesla buyers no longer qualify for the credit. Tesla instead sells its credits to other automakers that still haven’t sold their 200,000.

In the second quarter, Tesla’s credit sales totaled $428 million. That is 8% of its automotive revenue and almost four times what it earned for credits in the same quarter last year.

Tesla "would not have become S&P500 eligible without this lever," wrote Joseph Spak, an analyst for RBC Capital Markets, in a note to investors.