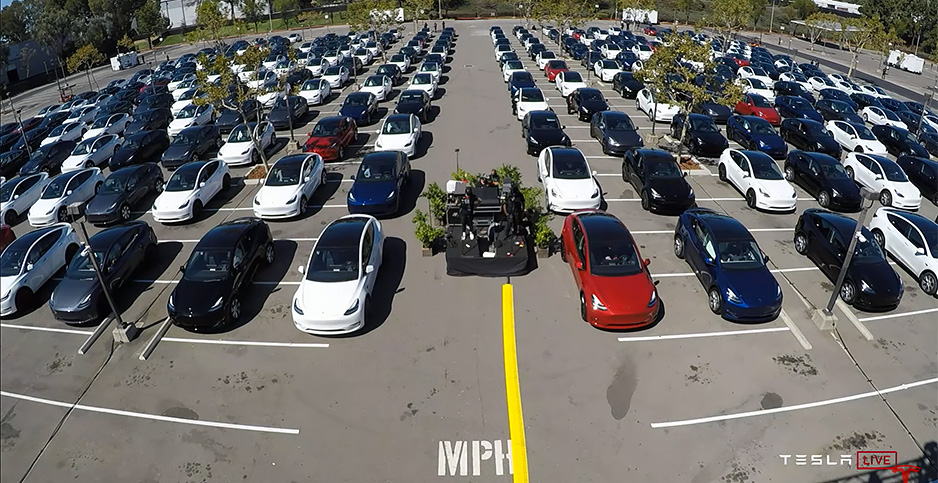 At its much-hyped Battery Day, Tesla Inc. yesterday unleashed a blizzard of innovations that it said could make battery-making cheaper and result in a $25,000 Tesla within three years.

It was a different kind of show for Tesla and its CEO Elon Musk, who is known for unveiling electric trucks and cars in front of a live crowd and seizing the popular imagination in a way that makes its stock sizzle.

The latest presentation, at Tesla’s auto factory in Fremont, Calif., was made to investors who observed COVID-19 guidelines from the seats of their Teslas, lined up in neat rows in a parking lot. Instead of applauding, they honked.

"It’s a little hard to read the room with everyone sitting in cars," Musk said as scanned the assembled vehicles.

What followed was a nearly two-hour tour of battery manufacturing by Musk and Drew Baglino, Tesla’s head of powertrain and energy engineering. Together they dipped into technical details that might have left some minds numb.

"it’s insanely complicated," Musk said at one point as he discussed the finer points of nickel.

Such complications mean Tesla expects the changes will take three years to manifest, which disappointed investors. The Palo Alto, Calif.-based company’s stock sank 7% in after-hours trading, unlike the spike that has followed many of Tesla’s products that can be driven or mounted on a house.

Some, perhaps used to the short deadlines that Tesla often sets for itself, were dismayed by the prospect of a wait. "While next-gen battery/manufacturing technologies and products are ambitious, some are not unique and others could be further out than hoped," wrote Joseph Spak, an analyst at RBC Capital Markets, in a note to investors.

Others said the plan seems realistic.

"There is a road map to reduce the product costs. It’s very well thought through overall," said Alexandre Marian, a managing director at consulting firm AlixPartners.

The take-home message: Tesla sees a nearly insatiable need for batteries and intends to fulfill it by making the battery factory far smaller and faster.

The company plans to do this by making its own batteries, something that has long been rumored. Tesla is building a pilot-scale manufacturing facility near its home factory in Fremont that will grow to 10 gigawatt-hours of production by next year. It’s designed to be the template for other factories it will deploy around the world.

The need is such that Tesla is moving to ramp up its own production while still obtaining batteries from its Asian suppliers, including Panasonic Corp., LG Chem Ltd., and Contemporary Amperex Technology Co Ltd.

Musk and Baglino described the routes for improving its vehicles. They include redesigning the battery cell, changing the process for making crucial components and fusing the battery to the vehicle skeleton.

Put together, Musk said, the efficiencies would slash the cost of Tesla’s batteries in half. Tesla doesn’t say what its current cost is, but most analysts believe it to be between $150 to $160 per kilowatt-hour (kWh).

That would shove prices well below the $100 per kWh that is considered the threshold at which an electric car would be cost-competitive with one operating on gasoline.

Musk did not say whether the $25,000 Tesla price tag — about the sticker price of a Nissan Altima sedan today — would be assigned to an existing Tesla vehicle or a new one.

Nor did Tesla reveal anything about a million-mile battery, which Musk had previously signaled would be a new goal (Energywire, June 23, 2020). Battery Day didn’t include news about how Tesla’s fleet will interact with the electric grid or what is planned in stationary storage.

Here are five things Tesla says it has up its sleeve:

Tesla is planning to make a new version of a battery that is far larger than those it sources from Panasonic.

The Panasonic battery cylinder has dimensions of 18 by 65 millimeters; the new battery will be a whopping 46 by 80 millimeters.

It’s moving from "an AA to a D," said Hanjiro Ambrose, a battery and electrification researcher at the University of California, Davis.

The new battery disposes of the tab, a strip that traverses the battery and in part governs how quickly and efficiently its charge fills and empties.

The new, tab-free architecture is set to take a "shingled spiral" shape that makes it easier to manage heat.

That will make possible a battery that contains six times the power and provides 16% more range, Musk said.

Ambrose described its capabilities as "drinking a cup of soda with more straws."

"That’s really promising technology because that will enable the big batt packs we need for medium and heavy-duty vehicles," he added.

Musk has long harped on the importance of efficiency and claimed yesterday that 10 terawatts of batteries are needed per year for the globe to shift to electric vehicles.

That will take streamlined factories capable of producing 20 gigawatt-hours of batteries on a single assembly line. At its Gigafactory in Nevada, which produces about 35 gWh a year, Panasonic operates at least 11 assembly lines.

The goal, Musk said, is to produce 100 gWhs of batteries a year by 2022 and 3 terawatt-hours by 2030, in part by packing processes closer together.

"How can we in one factory do what five or 10 factories are required to achieve?" Musk said. "Tesla is aiming to be the best in manufacturing of anyone on Earth."

Tesla claims it has a new process to employ silicon as a battery ingredient. Silicon is cheap and ubiquitous but tends to expand and crack when used in a lithium-ion battery.

Musk said that Tesla has a new technique that evades that problem. The strategy is also purported to turn raw metallurgical silicon into battery-quality material via a simple process that could increase the range of the vehicle by 20%.

Musk revealed some details of how Tesla intends to secure its own supply of lithium, the element that gives the lithium-ion battery its name.

It has bought rights to a 10-acre deposit of lithium clay in Nevada and is also in the beginning stages of developing a full-scale factory within the factory at its Nevada facility to recycle used lithium-ion batteries.

Tesla also claims to have done something no other automaker has yet achieved: using the battery itself as a structural element in the vehicle.

This, Musk said, would replace steel struts, reduce the vehicle’s mass by 10% and boost its range by 14%.

Tesla’s Battery Day presentation was unusual in that it took a smattering of process improvements — ones usually done incrementally and out of public view — and put them all on display on one day.

But they aren’t necessarily revolutionary, said Ambrose, the UC-Davis researcher.

"My take was that there isn’t anything new, and that is good," he said. Instead, it is "the implementation for really promising tech that’s been in the pipeline for a long time."

Another takeaway from Tesla’s latest big reveal is that batteries — and the electric vehicles they power — have arrived as front-page news and as a topic of popular imagination.

"It helps show that transportation electrification is on the cusp even in this incredibly challenging environment," said Ben Prochazka, national director at the Electrification Coalition, a nonprofit that advocates for EVs. "It’s not just electronauts or early adopters."