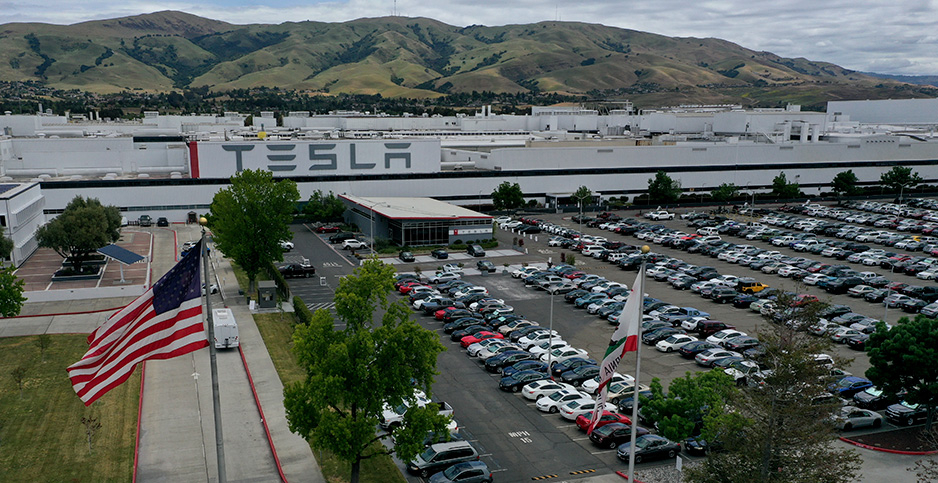 A study found that Tesla Inc.'s electric vehicles are among the most American-made, beating out most models by American manufacturing stalwarts like General Motors Co. and Ford Motor Co. An aerial view of Tesla's factory in Fremont, Calif., is shown. Justin Sullivan/Getty Images

Tesla Inc.’s cars contribute more to the U.S. economy because they are made with more American parts, manufacturing and labor than other automakers, a new report says, raising tantalizing questions about the future of electric vehicle manufacturing.

The survey, the American-Made Index by Cars.com, has been conducted yearly since 1998.

Tesla’s Model 3 sedan topped the list of 2021 model-year cars, with Tesla’s Model Y, a mid-size SUV, coming in third. Last year, Tesla models ranked third, fourth and ninth. This is the second year in which Tesla vehicles were part of the survey.

The results come as electric vehicles and domestic manufacturing are top concerns for Congress, and are sure to fuel the debate about how closely the two are related.

"What we’re seeing here with Tesla at the top really does highlight the potential for electric vehicles to have high domestic content," said Kelsey Mays, an editor at Cars.com who led the survey.

The manufacturing of an electric car is dominated by its battery, its most expensive and heaviest part.

Its weight prompts automakers to save money by locating the battery plant near the auto plant. And the strategic uncertainty around being able to secure enough batteries is encouraging automakers to play a key role in developing them, rather than entrusting a key component to a supplier.

For example, at an investor event last week, Ford Motor Co. CEO Jim Farley said that he aims for producing batteries to be "a core competency for the company."

These pressures are causing big automakers in both Europe and North America to race to build battery plants in their home markets, forming the beginnings of a counterweight to China, where the bulk of battery manufacturing and development is now.

"You have one automaker who is really leading the charge in domestic production of electric vehicles and componentry, if you will, but others are not that far behind," Mays said.

A wave of U.S. automotive battery plants are currently under construction or on the drawing board.

They include SK Innovation’s plant outside Atlanta, which will supply Volkswagen Group of America’s auto plant, among others. Factories in Ohio and Tennessee are being built by General Motors Co. and LG Chem to make GM’s Ultium batteries, and Tesla’s new auto plant is in Austin, Texas.

Others have been unveiled just recently, like Ford’s revelation last month that it will build plants capable of producing 60 gigawatt-hours of batteries per year with SK Innovation. Last week, Volvo said it will build a battery plant in South Carolina.

Tesla scored far higher than other American automakers on a crucial metric — final assembly of vehicles sold in the United States. It scored 100% across all its models, compared with 53.8% for GM and 84.6% for Ford.

All of Tesla’s cars sold in the United States are currently made at its factory in Fremont, Calif.

Cars.com also surveyed U.S. car shoppers, 72% of whom said a car’s economic impact on the United States is important, up from 70% a year ago. Almost a third, 29%, said it is ‘unpatriotic’ to buy a foreign-made vehicle.

The survey also demonstrates how outsourced the U.S. auto fleet has become. Of the 344 vehicle models that Cars.com analyzed, only 121 were at least partially assembled on U.S. shores.

Of the 80 vehicles sold in the United States that were at least partially electrified — gas-electric hybrids, plug-in hybrids and battery-only electric cars — only 27 were partially assembled here.

The only two non-Tesla and pure-EV models to make that list were the Chevrolet Bolt, made in Michigan, and the Nissan Leaf, made in Tennessee.

Among hybrids, a much larger number are mostly American-made, including hybrid versions of the Ford Escape, Explorer and F-150, the Honda Accord, the Jeep Wrangler, and the Toyota Camry, Highlander, RAV4 and Sienna.

Cars.com assembles its survey from data that automakers are required to disclose under the American Automobile Labeling Act, along with comparisons of the size of an automaker’s domestic workforce to its vehicle output. This year, the survey also evaluated 406,000 individual vehicles by their vehicle identification numbers.

The No. 2 car on the 2021 American-Made survey was the Ford Mustang, which is made in Michigan. However, the company’s new electric version, the Mustang Mach-E, is made in Mexico.