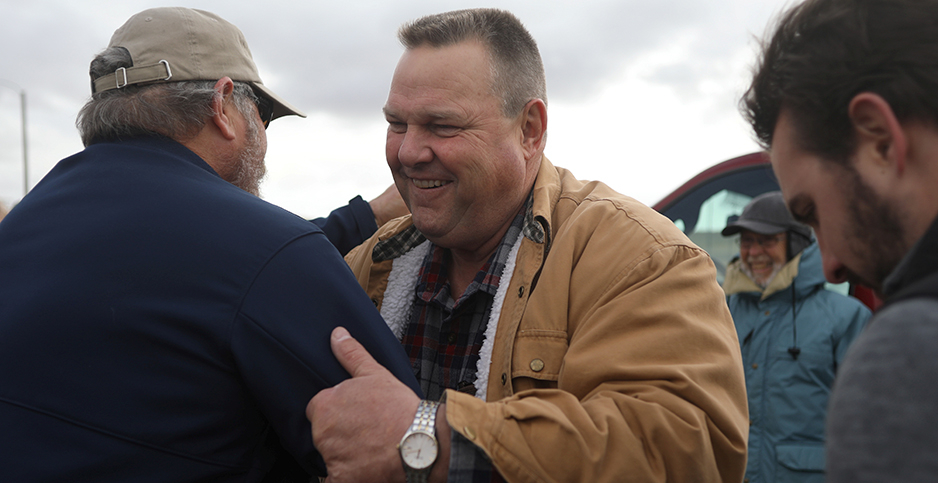 Montana Sen. Jon Tester can picture Democratic presidential nominee Joe Biden winning the White House next month, but he’ll readily admit he can’t quite see himself with a role in the administration. At least not without his tractor.

"I pulled down some gas tanks this morning and sanded them down, and I’m in the process of repainting those. Normal senators don’t do that kind of work," Tester said in a telephone interview from his home in Big Sandy, Mont.

The three-term Democratic lawmaker, identifiable by his signature flattop haircut and three fingers missing from his left hand, still runs an organic farm on land his grandparents homesteaded in 1912 (Greenwire, Oct. 19, 2012).

"First of all, Joe Biden has to win, and then we can talk about what my future is," Tester said when asked whether he’d consider a Cabinet post in a Biden administration.

"I will tell you that I have not thought about moving into an executive branch position. I will give you the stock answer that every senator gives you that I’m very happy being a senator, and I am," he continued. "But the truth is that there are some complications moving into an executive branch position with me that I don’t think any other senator has: I operate a working farm."

But Tester, who recently published a memoir, "Grounded: A Senator’s Lessons on Winning Back Rural America," didn’t rule out the option.

"There would have to be similar flexibilities to what I have in the Senate, and I don’t know if that’s possible or not," he said, a reference to his weekly return to the farm he operates with his wife, Sharla. "Either that or I would have to give up agriculture, and it’s the only thing that keeps me sane in this world. My family too."

And, anyway, Tester warned that less than a month from Election Day, he wouldn’t be willing to bet on the outcome.

In fact, Tester may as well have been referring to his own series of belated campaign victories, detailed in his book.

"Our balloons still hung over the lobby in their net, and a hotel staffer got stuck with the weird job of pulling them down one by one, then popping them," he recalled of his 2006 bid to unseat then-Sen. Conrad Burns (R). Although he won that race and his two subsequent reelection bids, none of the races has ever been called in his favor on Election Night.

Tester, 64, began writing his memoirs following the 2018 election, in which he captured more than 50% of the vote for the first time in his Senate career.

He told E&E News he wanted to publish his memoirs in 2020, in part, to call to his fellow Democrats to rethink their approach to rural America, which political pundits widely see as Republican territory.

"I just want Democrats to know that even though we haven’t done particularly well in a lot of rural America, that there is opportunity there," Tester said.

"And that if they go out and talk to the folks from rural America — and do what you’re supposed to do, listen first and speak second — I think there’s opportunity to get a lot of votes out of rural America, and that’s why I wrote it," he said.

Among the areas Tester sees potential for Democrats to find new support among rural voters is climate change policy — although he acknowledged he doesn’t necessarily want to approach the subject the way his party currently does.

"I just think we talk about it the wrong way," Tester said. "The first words out of our mouths is, ‘We’ve got to get this taken care of, we’ve got to put a carbon tax or we’ve got to shut down this or shut down that.’ When in fact we should be talking, No. 1, about the challenges that are out there."

Echoing his book, Tester pointed to the impacts of weather patterns on agriculture and his own experiences on the farm that he has run since the late 1970s.

"I think we need to approach it differently and maybe not even talk about climate change. Maybe we ought to talk about weather uncertainty or we should be talking about hailstorms, depending on where you’re at in the country," he added.

Tester suggested that lawmakers need to address topics like the future of crop insurance and carbon sequestration.

"Part of that too, and we’re in the middle of an election season, is there are people that want to inflame this issue so that nothing gets done on it. Make no mistake about that," Tester said.

While the Montana lawmaker spends significant time detailing his family’s history in Montana and the West, as well as his own childhood — including the accident with a meat grinder that removed three of his fingers at age 9 — his focus often returns to the 2018 election.

The book opens with Tester’s clash with President Trump over the nomination of Rear Adm. Ronny Jackson to become secretary of Veterans Affairs, following revelations from whistleblowers that ultimately led to Jackson’s decision to withdrawal himself from contention.

But Trump’s anger over the incident prompted the president to aggressively campaign against Tester, making repeated visits to Montana to support GOP challenger Matt Rosendale and even calling for the Democrat to resign.

In his memoir, Tester notes that was the first time a sitting president had called on an elected senator to leave office.

Donald Trump Jr., who likes to tout his experiences as a hunter, also appeared in Montana to rally Republicans that cycle.

While Tester ultimately won the contest, his irritation with Trump Jr. burns in his book — where he repeatedly refers to the Trump campaign surrogate as "the president’s greasy-haired kid."

"He comes to Montana and he tries to act like a Montanan, and in my book, that’s a pretty low form of life because he’s not," he added.

But Tester extended an invitation to Trump Jr. should he return to the state: "If he wants to go out in a hayfield, we’ll pick some bales. I’m 64 years old, I’ll work him into the ground. Don’t come to Montana and try to act like you’re something you’re not."