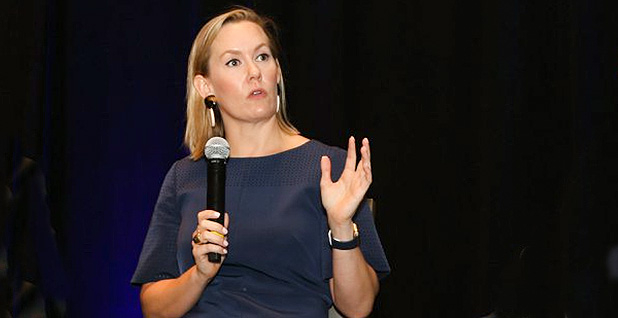 As a young lawyer almost a decade ago, Anne Idsal joined the Texas Commission on Environmental Quality just as the agency was embarking on years of strife with the Obama-era EPA.

Now, as EPA’s acting air chief, Idsal is poised to play a decisive role in settling several long-festering standoffs with direct ramifications for her home state and heavy industrial operations there.

While she was still leading EPA’s Dallas-based regional office last August, she signed off on a regional haze proposal for Texas that upended a 2016 plan to require added pollution controls on coal-fired power plants (E&E News PM, Aug. 17, 2018).

She’s now in a position to shepherd that proposal to completion. Among other Texas-related proposals that could be heading her way: a package of sulfur dioxide compliance decisions that the state is challenging in federal court and a proposal to resurrect a legal shield for Texas companies that violate their air permits under certain circumstances.

However Idsal proceeds, she won’t be encumbered by the wads of recusal obligations that bedeviled her predecessor, Bill Wehrum.

Unlike Wehrum, whose career as a lawyer in private practice was bookended by two stints at EPA, Idsal has spent almost her entire career in government, according to her LinkedIn profile. Her tenure at the Texas commission ended in late 2014 — too long ago to fall under the recusal umbrella for her former employer under President Trump’s ethics pledge. A few timeouts she faced after joining EPA in late 2017 have since ended.

In her initial recusal statement filed in July 2018, for example, Idsal cited attorney bar obligations as a reason for keeping out of two EPA matters: Texas’ state implementation plan for addressing SO2 transport (officially known as the "Texas SO2 Transport SIP") and the "Texas Regional Haze 5 Year Program Report."

In an update this past May, however, Idsal effectively dropped those recusals. The Texas commission’s legal office had confirmed that she did not "substantially" participate "in these particular matters while at TCEQ," she wrote. Therefore, neither state nor federal officials objected "to my participation in future decisions regarding these two particular matters." E&E News obtained both documents through Freedom of Information Act requests.

The practical impact of that about-face is unclear. Neither Idsal nor EPA press aides responded to emails asking whether the prior recusals had forced her to abstain from involvement in specific rulemakings or other regulatory issues.

Under a 2017 EPA "impartiality determination," she agreed to steer clear of specific EPA business that she worked on "personally and substantially" while at the Texas commission (Greenwire, Aug. 6, 2018).

In general, Idsal’s earlier work for TCEQ doesn’t necessarily present a conflict of interest, said Luke Metzger, executive director of the nonprofit Environment Texas. But now that she’s at EPA, "I think she’s clearly been put in that position for a reason, reflecting the president’s emphasis on rolling back environmental laws," Metzger said in a phone interview.

Idsal also did not reply to a request for comment on that issue.

Bryan Shaw, a former member of the Texas commission, scoffed at the suggestion Idsal has an agenda. In her various roles, she was known for "being fair-minded and trying to make a concerted effort to follow the rule of law," Shaw said, also by phone.

Idsal, part of a politically wired Texas family, wasn’t long out of Baylor Law School when she went to work for the Texas environment commission, often known by its initials as TCEQ.

Her first commission post in 2010 was as assistant general counsel, according to the LinkedIn profile. The next year, she became special counsel and executive assistant to Shaw, then the TCEQ chairman. She was later promoted to general counsel before leaving in late 2014 to take a top post with the Texas General Land Office.

While at TCEQ, her duties variously included policy development, coordination with EPA and outside groups, and offering legal advice, according to the profile, which doesn’t detail specific issues. During that time, Texas was a lead player in a lineup of Republican-run states on the offensive against Obama-era environmental initiatives ranging from small-bore compliance decisions to nationwide limits on power industry mercury emissions.

Perhaps none stands to affect Idsal’s home state so directly as the outcome of the long-running battle over the scope of EPA’s regional haze reduction requirements. Dating back to 1999 in its current form, the haze program is supposed to clear the air in 156 national parks and wilderness areas by 2064.

Prodded by a 2011 lawsuit brought by environmental groups, EPA began cracking down on states to develop past-due plans to deal with haze-forming emissions.

After discarding part of a Texas blueprint they deemed inadequate, federal regulators in 2016 finally imposed a plan that would require more than a half-dozen coal-fired power plants to install or upgrade scrubbers to slash SO2 emissions that one study has linked to several hundred yearly premature deaths (Greenwire, Oct. 30, 2018).

The Texas commission, which pegged the compliance price tag at $2 billion, quickly challenged the agency’s decision in court, and the Trump administration has since moved to overturn it.

The tentative replacement signed last August by Idsal would scrap direct pollution control mandates in favor of an emissions trading scheme that critics say would require nothing in the way of lower SO2 releases.

EPA now plans to issue the final version in the first half of next year, according to a recent court filing (Greenwire, Aug. 1).

Another regulatory hot spot is EPA’s 2015 rule ordering about three dozen states to drop affirmative defenses that allow companies to escape civil penalties for excess emissions that occur during plant startups, shutdowns and malfunctions. Texas is among the states challenging that rule in lawsuits pending before the U.S. Court of Appeals for the District of Columbia Circuit.

At the Trump administration’s request, the consolidated litigation has been on hold for more than two years. In response to a 2017 TCEQ petition, however, EPA in April proposed to let Texas keep its version of the affirmative defense language (Greenwire, April 26).

Idsal did not sign that proposal; EPA’s latest regulatory rundown does not give a date for issuing the final version.

Also in play is EPA’s 2016 decision to designate three Texas areas in nonattainment for the current SO2 standard of 75 parts per billion.

The Texas commission is fighting that determination in a lawsuit before the New Orleans-based 5th U.S. Circuit Court of Appeals. Proceedings in that case are also in abeyance as EPA works on its response to Vistra Energy Corp.’s request to administratively reconsider the nonattainment designations. A proposed rule was due out in May, according to the regulatory rundown. It has not yet been issued.

Idsal joined EPA as administrator of the Dallas-based Region 6 office in December 2017. This past April, following a move to agency headquarters, she became principal deputy assistant administrator in the Office of Air and Radiation (Greenwire, March 26). She moved up to acting air chief a little more than a month ago after Wehrum abruptly resigned.

Absent a waiver, Idsal remains recused from particular matters involving her family’s closely held corporation, Idsal Family Properties Management, as well as a pipeline in which she has an easement interest, according to her May filing. She is also recused from specific matters in which the Leukemia & Lymphoma Society is a party through this December, the statement says.