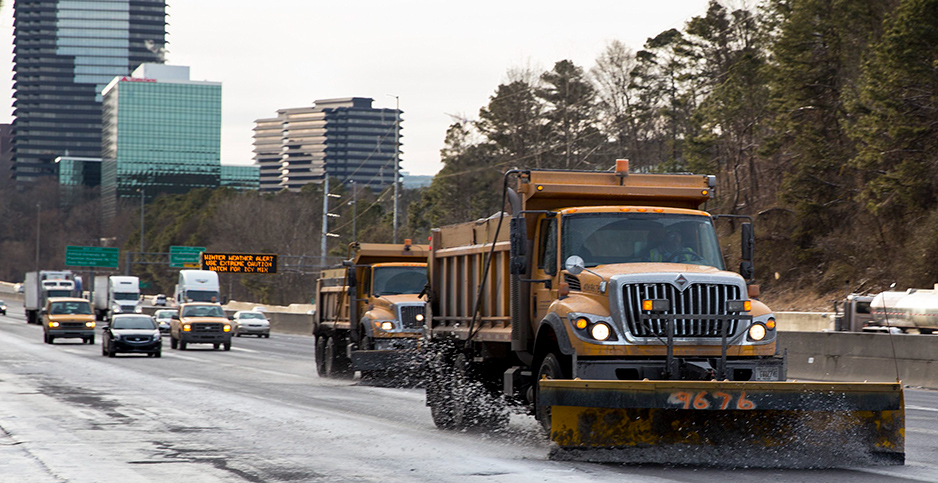 When arctic air sent the U.S. Southeast into a deep freeze seven years ago, electricity companies scrambled to stabilize the grid as customers stayed home and turned up the heat and other appliances.

"We didn’t have rolling blackouts, but we were on the hairy edge," Tom Fanning, CEO of Atlanta-based utility giant Southern Co., said in a recent interview with E&E News.

The bitterly cold temperatures that lasted for days in late January 2014 shed light on the impact climate change and extreme weather can have on the power sector. Most electric companies across the Southeast used the event to beef up their winter emergency plans, shore up their grids and make other adjustments to be prepared for next time.

Electric company officials broadly say "no" and point to steps taken in response to the winter storm seven years ago. But the Texas blackouts, which left more than 4 million homes and businesses without power for days, are again raising questions about the risks of prolonged frigid weather to the power grid.

It’s a question that climate scientists also have warned about, as a growing body of scientific research suggests that extreme cold in lower latitudes could be tied to a warming planet (Climatewire, Feb. 17).

Electric and natural gas officials across the region have taken notice.

"There’s going to be a whole lot of studies, a lot of learnings coming out of [the Texas crisis] for the whole industry, for the whole nation, over several months and probably years," said Jeff Grubb, resource planning director at Southern’s Georgia Power unit, one of several executives speaking to the Georgia House Energy, Utilities and Telecommunications Committee on Feb. 25.

"It’s a very complicated issue with lots of moving pieces," he said.

Some speakers at the hearing pointed to the January 2014 polar vortex, when many electric companies reached peak capacity.

The Southeast grid differs from that of Texas, whose competitive power market has come under scrutiny in the wake of the most recent outages (Energywire, Feb. 26). The tightly regulated Southeast is the only region where electric companies are not part of a system overseen by a grid operator.

Electricity companies in the region are connected to the Eastern regional grid, giving them access to additional supplies if needed. Most of the utilities — such as Dominion Energy Inc., Duke Energy Corp. and Southern — operate their own power pools or so-called balancing authorities that connect each of their territories. But they also buy and sell power as needed outside their borders.

What’s more, the structure of Texas’ deregulated power market doesn’t offer economic incentives for keeping extra generation in reserve. There’s no long-term planning process like the integrated resources plans that govern much of what electric companies in the Southeast do. These road maps project future demand on the grid and lay out what each utility needs to add to its system. Companies also use that planning process to ensure they have enough reserves to meet demand during extremely hot or cold days.

"That doesn’t mean we plan to handle all of them, but we do study them, and we plan for them," Grubb at Georgia Power said, adding that the electric company models as many as 700 scenarios with varying electricity mixes, demand forecasts and weather. "At a minimum, we make sure we have projected a one-in-10-years at worst reliability scenario."

Emily Grubert, an assistant professor of civil and environmental engineering at Georgia Tech, warned against knee-jerk reactions to the Texas debacle that could lead to more fossil fuel generation on the grid, if electric companies and state regulators agree that additional baseload electricity is needed to prevent rolling blackouts.

"We have to decarbonize and adapt at the same time," said Grubert. "There are going to be some real challenges on that."

Curbing electricity demand could come into play, she said. Stricter building codes and a shift toward heating pumps are two examples of how to make the power sector more energy-efficient.

"If the houses were more efficient and had more efficient heating, that would have made a big difference" in Texas, she said, noting that the same is true for the Southeast.

In January 2014, the Tennessee Valley Authority asked customers across its seven-state Southeastern territory to curb electricity use as temperatures were forecast to drop — and stay low — during the polar vortex.

The nation’s largest public power utility expected demand to reach as high as 33,000 megawatts during the coldest weather. TVA was far from having rolling blackouts, based on its forecasts, but it still didn’t want to take chances (Energywire, Jan. 27, 2014).

Even with ample fuel supplies, operating reserves and agreements with other electric companies to buy power, Dominion Energy South Carolina was short roughly 350 MW in early January 2014 and was forced to initiate rolling blackouts for about four hours "to keep the whole system from collapsing," Lee Xanthakos, the company’s transmission, operations and planning director, said at a South Carolina Public Service Commission hearing last week.

Many electric companies, such as Alabama Power, have used the polar vortex as the reason to add more generating capacity to their reserves.

The utility warned state regulators in 2019 that it would fall short on generation by 2023-24 if it didn’t fill what it said was a 2.4-gigawatt gap in winter reserves. Regulators signed off on building a natural gas plant, buying a second one and entering into an agreement to get gas from a third (Energywire, Sept. 9, 2019).

But having excess capacity only works for emergencies if power plants are maintained and can run when needed, Grubert pointed out.

"If you have a fire extinguisher in your house, but if you haven’t tested it in three years, how are you sure it’s going to work when you need it?" she said.

"All of the [emergency] agreements I mentioned could not help, as each company struggled to serve its own customers," he added at the hearing.

Grid overseers at the North American Electric Reliability Corp. said Dominion did the right thing, but Xanthakos said that was no consolation to the company, which set out to ensure that a day like that would not happen again.

A review turned up the following: An aging coal fleet had obsolete heat tracing systems; new combined-cycle natural gas power plants were designed for 25-degree-Fahrenheit weather and 5-mph winds; and a power plant manufacturer had incorrectly programmed the amount of fuel that goes into generators once the temperature drops to a certain level.

"Lastly, we did not have a systemwide approach to addressing cold weather," Xanthakos said. "So then we got to work."

Dominion hired an outside contractor to retrofit power plants to withstand zero-degree weather and 40-mph winds; it installed additional insulation to prevent equipment from freezing; and it developed a fleetwide inclement weather plan, among other steps.

"Simply put, we winterized and are prepared now for extreme cold weather events as well as other natural disasters and system threats," he said.

"Mississippi dodged a major bullet; it could have been much worse," Public Service Commissioner Brandon Presley said in an interview with E&E News. "You have to ask yourself as a regulator, ‘What could have turned awful quickly, and how did we avoid that, and how do we keep that from happening in the future?’"

The Mississippi regulator’s review is part of a larger one that looks at the weatherization and storage capabilities of the state’s natural gas, electricity and water providers, he said.

Presley said he’s preparing for pushback once companies and customers start talking about the price tag that can come with winterizing utility assets.

"We’ve got to have a serious discussion about weatherization," he said. "I’d much rather us invest in a platinum weatherization effort than endanger public health and welfare and the collapse of the power grid."