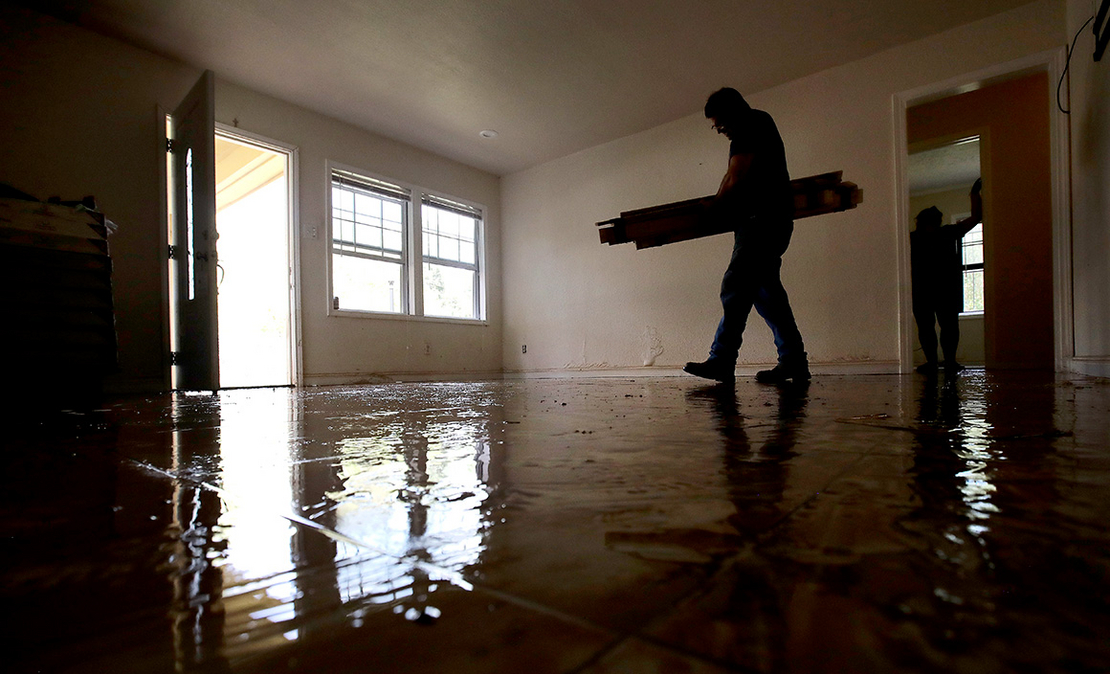 A man carries water-soaked items from a house after it was flooded by Hurricane Harvey in 2017. AP Photo/Charlie Riedel

The nation’s strongest flood-disclosure law for rental properties has taken effect in Texas and is forcing landlords to tell prospective tenants whether an apartment has been flooded and whether it’s in a flood zone.

The Texas law, which took effect Jan. 1, is the first to require landlords to disclose both the flood history of a rental unit and whether it’s in an area that has a significant risk of flooding.

Only five other states require flood disclosure for rental units. In those states, landlords must notify renters of either flood history or if the apartment is in a flood-prone area.

Housing advocates hailed the Texas law but one researcher says it could drive down property values in flood-prone neighborhoods and exacerbate segregation by concentrating low-income and minority renters in high-risk areas.

The law was approved easily last year in the Republican-controlled Texas Legislature and signed in June by Gov. Greg Abbott, a Republican. A broad coalition of housing advocates, landlords and real-estate groups supported the measure.

“We are stepping in the right direction so tenants can make informed decisions for their families,” Chrishelle Palay, a housing advocate in Houston, wrote on Twitter yesterday.

The Texas Apartment Association testified in support of the measure at legislative hearings and said it did not unduly burden landlords. The law contains protections for landlords such as a definition of “flooding” and language that lets tenants break a lease only if they did not receive the required notice before sustaining “substantial loss or damage” from flooding.

In Texas, many renters live in areas that are flood-prone or have a concentration of apartments that are older and more susceptible to flooding, according to an analysis by the Texas Legislature.

The law comes as climate change is intensifying flooding and building momentum for state and federal laws that require flood disclosure. Most of the lobbying has focused on requiring flood disclosure to people who are considering buying property — not to renters who are signing leases.

Texas has become a national leader in flood disclosure since Hurricane Harvey dropped record rainfall in the Houston area in 2017 and caused $140 billion in property damage — one of the most destructive storms in U.S. history.

Texas is one of only four states along with Louisiana, Mississippi and Oklahoma that has strong disclosure laws for property sellers, according to an analysis by the Natural Resources Defense Council. No disclosure is required in 21 states including Florida, New York and New Jersey, according to the NRDC.

The Federal Emergency Management Agency said in October that it is considering a nationwide flood-disclosure requirement for property sellers.

The five states other than Texas that require flood disclosure by landlords are California, Georgia, New Jersey, Oklahoma and Oregon, according to an E&E News review of reports and state laws. But those laws have limitations.

The Texas law requires disclosures and says it must be given in writing for every rental and in a document that is separate from a lease.

The Texas Apartment Association has created sample disclosure forms with two paragraphs where landlords can check whether or not a property has been flooded in the past five years and whether it is in an area that FEMA maps show have a 1 percent annual chance of being flooded.

Danny Hardeman of the MetroTex Association of Realtors says in an online video that giving prospective tenants the disclosure upfront “will potentially save some time if someone is going to back out based on what they see on this form.”

But an article published last year in the University of Pennsylvania Law Review argues that flood disclosure for tenants “is not enough” and “will not have as much of an impact as proponents would like.”

Disclosure laws will enable “well-resourced renters to make more informed decisions about where to live,” but the laws also “will serve to continue the de facto segregation of low-income renters and renters of color,” Heiman wrote