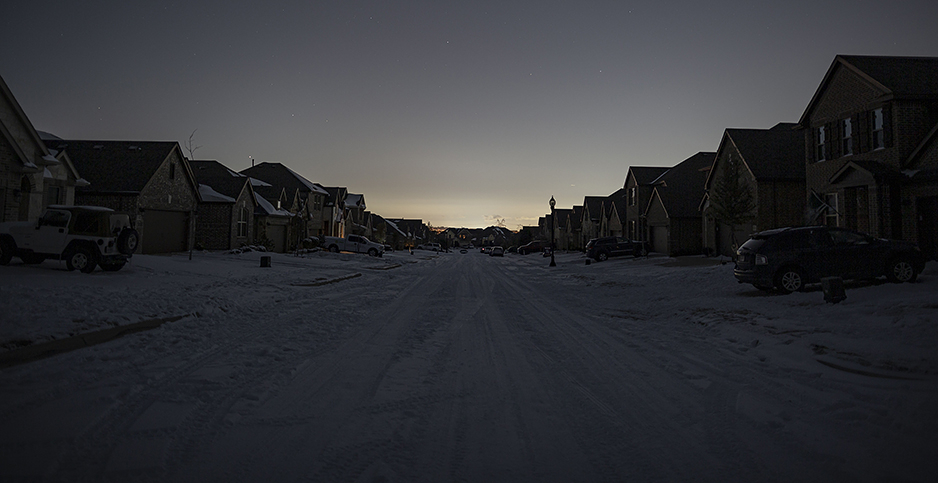 A rolling blackout sweeps through Argyle, Texas, on Monday after a record-breaking winter storm struck much of the U.S. Chris Rusanowsky/ZUMAPRESS/Newscom

The state’s grid operator was able to keep the lights on, but many observers were worried. They wondered if Texas power plants would be able to match the rising demand, driven largely by residents reaching for the dial on their air conditioning units.

When the grid locked up again this week, leaving 4 million people in Texas without power, it was for an entirely different reason: extreme cold, the likes of which the state had never seen.

The whiplash crises highlight the challenge facing energy planners in a warming world. Extreme weather is increasingly likely to stress electric grids, gas pipelines and other pieces of energy infrastructure. But the exact manner in which those tests arrive is difficult to predict.

"What we’re seeing is the need to prepare systems to withstand a variety of events: wildfires, droughts, hurricanes, now a deep freeze," said Daniel Cohan, an atmospheric scientist and professor of civil and environmental engineering at Rice University in Houston. "All those except for maybe the freeze are exacerbated by climate change."

Indeed, the role of the changing climate in this week’s cold snap is unclear.

A growing body of scientific research suggests that bouts of extreme cold may be a function of a warming planet. The science is hardly settled, but the initial theory holds that as temperatures in the Arctic rise, cold air is pushed into lower latitudes. The result is a strange dichotomy where winters become warmer, on average, but can be punctuated by frigid blasts of polar air.

Judah Cohen, a climate scientist and director of seasonal forecasting at Atmospheric and Environmental Research, an environmental analytics firm, is a leading advocate of the idea. His own research suggests a statistical correlation between warm spells in the Arctic and extreme winter weather in the United States — when warming happens, winter storms are often not far behind.

There’s a prevailing idea among decisionmakers that "increasing greenhouse gases lead to a warmer winter and less snow," Cohen said. "And I’m trying to argue that it’s more complex than that."

What happened in Texas, he added, "is really kind of a textbook case of what I’ve been arguing."

This is not the first time the state has experienced a winter blackout. In 2011, cold temperatures prompted electricity demand to soar and caused a collection of coal and gas plants to freeze up. An effort to winterize Texas power plants appears to have been insufficient, industry observers said.

The Electric Reliability Council of Texas, the grid operator serving most of the state, reported yesterday that 29,000 megawatts of thermal capacity like gas and coal tripped offline. Some 16,000 MW of renewable generation was similarly shut down. The Nuclear Regulatory Commission reported yesterday that one unit at the South Texas Nuclear Generating Station was down.

Freeze-ups at wellheads further limited gas supplies, just as demand for the fuel was soaring. Power plants have had difficulty securing gas because demand for residential and commercial heating takes priority on the system.

"It’s affecting every piece of the supply chain. It’s not just wires; it’s not just pipelines; it’s not just power plants — it’s the whole thing," said Melissa Lott, a senior research scholar at Columbia University’s Center on Global Energy Policy. "And if we want to prevent this from happening in the future, we’re going to have to think how we reinvest in the system to make it stronger, more resilient and more reliable."

How often Texas might experience blasts of Arctic air is uncertain. The root cause of this week’s cold streak lies with a huge atmospheric current known as the polar vortex. It’s a low-pressure mass of cold air swirling around at the top of the world.

The polar vortex usually stays confined to the Arctic. But sometimes a disruption causes it to wobble or even split into pieces, sending bursts of cold air streaming south. A sudden rise in temperatures high up in the atmosphere, for instance, can knock the polar vortex off-kilter.

These Arctic outbreaks can trigger bouts of extreme winter weather wherever they land, anywhere from the United States to Siberia.

What happened in Texas is the most extreme episode in a spate of wacky winter weather linked to the polar vortex over the last few weeks. The vortex has been wobbly since January, following a sudden warming event in the stratosphere. It’s triggered extreme temperatures and heavy snowfall across large parts of the northeastern United States.

While it may seem counterintuitive, some scientists believe these kinds of sudden winter storms may have links to climate change.

Rising temperatures in the Arctic — currently one of the fastest-warming regions on the planet — may increase the odds of these polar outbreaks, according to Cohen and a number of other climate scientists. The theory holds that when Arctic temperatures spike, or an Arctic heat wave occurs, it can trigger the kind of atmospheric warming event that destabilizes the polar vortex.

Arctic heat waves are growing more frequent and more severe as the climate continues to warm. If the theory is correct, it would suggest that wobbles in the polar vortex may happen more often in the future.

There’s still some scientific debate about the idea.

While Cohen’s work suggests a statistical connection between Arctic warming episodes and severe winter weather, climate models have had a difficult time simulating the effect. Some experts have suggested that the influence of the Arctic climate might be relatively weak, or that there might be a third factor that’s driving both Arctic warming episodes and extreme winter storms.

One 2019 study published in Nature Climate Change looked at the connections between declining Arctic sea ice — which scientists believe is strongly linked to Arctic warming — and cold winters in the mid-latitudes. It concluded that temporary shifts in large-scale circulation patterns in the Northern Hemisphere can drive both sea ice declines and intensifying winter weather at the same time.

Two of the study’s authors, Russell Blackport and James Screen of the University of Exeter, renewed their position in a letter to the editor published in Nature Climate Change in November.

They argue that there hasn’t actually been an increase in the waviness of the jet stream or the frequency of extreme winter weather in recent years, and that the influence of the Arctic climate on mid-latitude weather is probably weak.

If he’s right, it doesn’t necessarily mean that Texas needs to brace for a winter storm every year. What happened in Texas will probably remain a relatively rare event — Arctic outbreaks don’t often reach so far south in such extreme ways.

It’s also true that winter weather, on the whole, is getting milder.

But this week’s events are a jarring reminder to prepare for the unexpected in a warming world. Climate change is associated with all kinds of sudden, extreme events — heat waves, hurricanes and wildfires alike. Winter weather disasters may be just another part of the mix.

In Texas’ case, ERCOT has done a poor job of incorporating climate change into its planning exercises, said Alison Silverstein, a former Texas utility regulator who now works as an energy consultant. She argued that boosting energy efficiency or improving transmission connections with other regional grids would improve Texas’ resilience.

"Nobody has been thinking, except for [former Vice President] Al Gore, about how ugly things could get and how we need to change our plans and rules," Silverstein said.

Yet much of the debate yesterday fell along familiar partisan lines. Sen. Steve Daines, a Montana Republican, retweeted a 2014 photo of a helicopter in Sweden spraying a frozen wind turbine blade with de-icer.

"Texas is frozen solid as folks are left w/no power to stay safe & warm," he wrote. "This is a perfect example of the need for reliable energy sources like natural gas & coal."

Texas is frozen solid as folks are left w/ no power to stay safe & warm.

This is a perfect example of the need for reliable energy sources like natural gas & coal.

These blackouts would be devastating to MT. No heat & no power simply are not options in the dead of winter. https://t.co/Tpn4wuqrfM

ERCOT officials, for their part, said outages were across the board.

"We’re seeing the loss across the various generation types, and really, those losses came at pretty much the same time as we saw the storm sweep through and have impacts on lots of different types of generation," ERCOT CEO Bill Magness said on a conference call with reporters.

Texas’ grid has undergone rapid transformation in recent years. Coal made up 40% of electricity generation in 2010 but fell to 18% last year, according to ERCOT figures. The decline reflects a series of large plant retirements and the fact that the coal facilities still in operation are running less.

Wind power, meanwhile, has surged, accounting for 23% of ERCOT’s electricity generation in 2020.

But experts diverged on whether the state’s retired coal capacity could have rescued the grid. Some, like Silverstein, noted that frozen coal piles in the northeastern United States were a leading cause of outages caused by the polar vortex that iced the region in 2014.

Others said it was a potential warning for states moving to close coal-fired power plants en masse. Texas likely would have benefited from maintaining the coal plants it has closed in recent years, said Tony Clark, a Republican who served on the Federal Energy Regulatory Commission.

Yet both said focusing on one fuel misses the wider point about what is ailing the state right now, Clark said. All forms of electricity generation have strengths and weaknesses. A diverse energy system is better able to cope with extreme weather events. In Clark’s case, he argued Texas’ electricity market does not provide the safeguards to withstand a worst-case scenario, he said.

"You’ve got to have some sort of regulatory system that ensures the financial viability of the generator matches up with the reliability of the system," Clark said.

Cheryl LaFleur, a Democrat who served alongside Clark at FERC, said battles over the role of renewables and fossil fuels in Texas’ blackout obscure the larger issues. A thorough study will be needed to determine what ultimately caused the disruption.

Yet the event still higlights the power system’s vulnerablities, despite some progress in hardening electricity infrastructure to climate-driven weather events.

"The climate response has two parts. One is mitigating the effects of climate change by reducing the amount of greenhouse gases we emit. And the second is being prepared," LaFleur said. "The fact that we’re still vulnerable to this extreme weather suggests there is more to do."