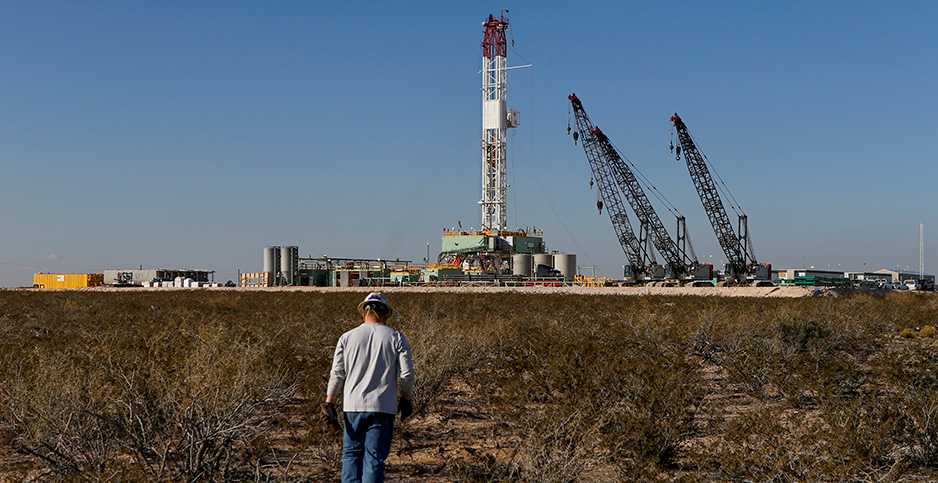 Texas regulators will not be imposing a quota system for crude oil production in the state, a state energy official said yesterday. An oil worker is pictured walking toward a drill rig in Loving County, Texas, in this Nov. 22, 2019, file photo. Angus Mordant/REUTERS/Newscom

Texas regulators won’t vote today on a plan to impose mandatory oil production cuts, ending a saga that has pitted factions of the drilling industry against each other.

The Texas Railroad Commission, which regulates energy production, has been considering reviving the quota system, known as prorationing, to prop up oil prices in the wake of the coronavirus epidemic.

But the idea’s champion, Republican Commissioner Ryan Sitton, who lost a primary election in March and will leave office when his term expires, couldn’t get the support from his two Republican colleagues.

Commission Chairman Wayne Christian said he’d vote against prorationing in a Thursday opinion piece in the Houston Chronicle. The third commissioner, Christi Craddick, hasn’t publicly disclosed her stance but was believed to oppose the idea.

"Pro-rationing will not be happening," Sitton said on Twitter yesterday.

He further told Bloomberg Television the idea is "dead."

The Railroad Commission used prorationing to control oil prices from the 1920s to the 1970s but hasn’t set quotas in more than 40 years.

Two Texas companies, Pioneer Natural Resources Co. and Parsley Energy Inc., asked the commission to revive the program in March to help deal with the price collapse caused by the virus.

The price of West Texas Intermediate crude has fallen by about two-thirds since the beginning of the year to a little more than $21 a barrel yesterday, and it briefly traded for negative prices last month. Oil companies have responded by shutting down production and laying off thousands of workers.

The number of land-based oil drilling rigs in the United States fell 325, down by more than half since the middle of March, according to Baker Hughes.

Sitton pitched prorationing as a way to impose an orderly slowdown across the entire oil industry. He also said it could help the Trump administration bargain with Saudi Arabia, Russia and other oil-producing countries over worldwide production cuts.

The Railroad Commission held a hearing on the issue that attracted dozens of parties and lasted more than 10 hours. At least two other states, Oklahoma and North Dakota, are scheduled to hold hearings of their own (Energywire, April 15).

However, Texas’ largest oil producers, including Exxon Mobil Corp., opposed the idea, saying free-market forces should be allowed to work.

In the last few days, producers across the state have announced production cuts of their own. Exxon said it will mothball 75% of its rigs in the Permian Basin, and Chevron Corp. is cutting its Permian production 125,000 barrels lower than its previous plan for the year.

Parsley, one of the companies that first asked for prorationing, said yesterday it’s suspending all new drilling and well completions after declaring a new loss of $3.4 billion for the first quarter of the year.

On Twitter, Sitton said, "I wish I could explain why so many Texans will lose their jobs while oil production drops in the U.S. worse than anywhere else, but politics beats data, so there are no answers. Just ‘free market.’"

The Texas news came as the Trump administration gave little indication as to whether it will take further steps to assist the oil industry after the Federal Reserve moved last week to expand a lending program.

"The president wants us, and we will remain energy independent," he said.

The three said in a statement that the two countries "want to put American oil and gas producers out of business so they can once again dictate energy prices to the world." And they said Ross "acknowledged the importance of America’s energy independence as a key part of our national security and is evaluating all of the federal government’s authorities, including tariffs, to secure America’s energy independence."

Trump in April directed Mnuchin and Energy Secretary Dan Brouillette to develop a lifeline for the industry. Late last week, the Federal Reserve announced it would make revisions to allow more companies to access a loan program created to help companies weather the pandemic.

Under the plan, the central bank’s Main Street Lending Program was expanded to include businesses with up to $5 billion in revenue and 15,000 employees. The minimum loan size was also lowered to $500,000, and a third loan option was created for riskier loans, in which banks would take a larger stake.

Oil-state senators, who had been pressing to revise the guidelines to provide capital to the oil and gas producers, welcomed the loan proposal last week.

"With the decrease in demand and oversupply due to the global oil price war creating a valley for these highly leveraged companies, this expansion will help them bridge the gap as we look to reopen America," said Cramer, who led a group of his colleagues in a letter Thursday to Federal Reserve Chairman Jerome Powell asking him to make credit available to energy producers.

Critics painted the changes as a giveaway to the fossil fuel industry and warned that they would allow heavily indebted companies to use the loans to pay off existing debt.

Bharat Ramamurti, a member of the congressional commission overseeing bailout funds and a former aide to Sen. Elizabeth Warren (D-Mass.), noted on Twitter that the Federal Reserve changes "mirror" those sought by industry and that it "raises questions about how the changes promote the broader public interest." He added that the provisions include no "meaningful requirement" that the companies that get taxpayer-backed loans keep workers on payroll or rehire workers they’ve already fired.

Brouillette last week told North Dakota producers on a conference call that the Trump administration was looking at securing lines of credit at the Treasury Department and with the Federal Reserve.

But Mnuchin would likely need additional congressional approval to extend support to the industry, said David Livingston, senior analyst with the Eurasia Group.

"The Fed is one piece of it; the big question is, can the other piece of it be the direct offering of bridge loans … through Treasury programs?" Livingston said. He added that he’s skeptical that further cash injections for the industry would be "possible in a legally sound way without the administration having to go to Congress."

Livingston said the Fed action "takes a lot of pressure off of Brouillette and Mnuchin" to take additional steps.

Livingston noted that Treasury involvement could be complicated if the government were required to take equity stakes in the businesses that take the loans — something that lawmakers oppose.

Instead, he suggested, the central bank action could act as a "lifeline for some of these firms to sustain themselves for the next several months until conditions improve" as the economy is restarted.

"What the Fed has done is not a silver bullet, but it does relieve some pressure," Livingston said.

Still, some industry executives are asking the administration to go further.

Dan Eberhart, CEO of Colorado-based Canary LLC, one of the largest private oil field service companies in the nation, and a Republican donor, last week sent Trump a letter urging him to lift tariffs on steel and other manufactured products that the industry uses.

"The impact of such tariffs on the products we rely on has always been significant, but it is now increasingly worrying as our margins shrink exponentially," Eberhart wrote.

He added that his company was spending about $80,000 a month in direct and indirect payments on tariffs and that he expected the total to top $1 million in 2020.

Trump in the past has dubbed himself the "tariff man" for use of the financial tool, and Eberhart acknowledged Trump’s affinity for tariffs in the letter.

"I know your trade team has worked hard to strike the right balance in the past, but the coronavirus has altered the business landscape substantially," he wrote. "Our trade policies should reflect that new reality. It will take an extraordinary effort to rebuild the oil field services industry this year, and we are going to need every cost savings possible to regain our previous levels of success."