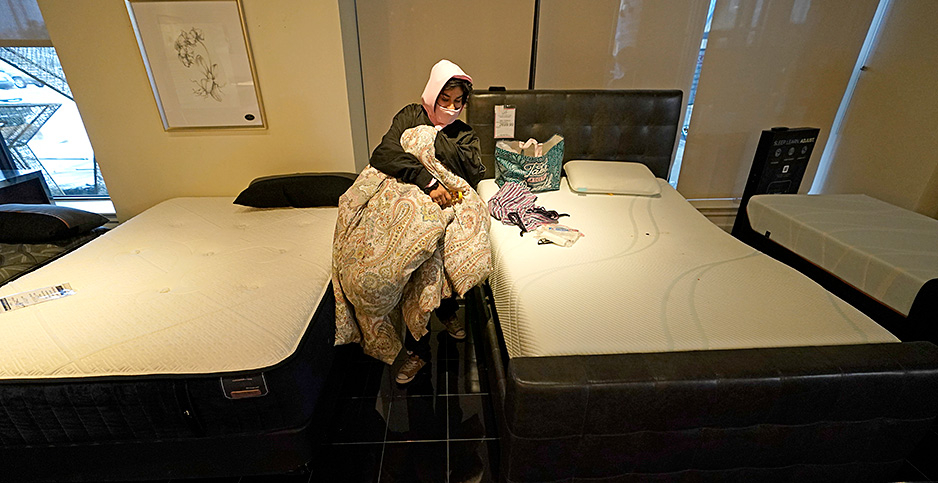 Dialina Gonzalez gathers her belongings after spending the night on a mattress inside a Gallery Furniture store, which opened as a shelter yesterday in Houston. Millions in Texas still had no power after a historic snowfall and single-digit temperatures created a surge of demand for electricity to warm up homes unaccustomed to such extreme lows, buckling the state's power grid and causing widespread blackouts. David J. Phillip/Associated Press

But this week’s arctic blast was too much for him.

"I was cold, man," DeRouen, 64, said yesterday from a city-run warming shelter.

Many Texans can relate to the self-described Cajun after three days of widespread power outages in a state whose biggest city calls itself the energy capital of the world. Yesterday, about 600 people were sheltering at the George R. Brown Convention Center, where they were given meals and beds.

More than 4 million Texas homes and businesses were without power earlier this week and the state’s main grid operator said it could take days to get the electric system restored. The number of outages was below 1 million this morning among Texas providers tracked by PowerOutage.US.

While the number of outages is falling and officials say they may be able to restore power to people who’ve been in the dark for days, the disaster was compounded by an ice storm that knocked out power lines in Austin and by water problems in Houston and around the state.

Houston, the nation’s fourth-largest city, warned residents to boil water before using it and told people without power to use bottled water. The emergency, caused by low water pressure, was expected to last until today, the public works department said in a news release.

Other parts of Texas were also experiencing water emergencies due to power outages and broken pipes, including parts of Fort Worth, Galveston, the Dallas suburb of Arlington and Pflugerville in the Austin suburbs.

Statewide, 7 million Texans — about a fourth of the state’s population — were under boil-water notices, and systems serving another 263,000 were completely offline, said Toby Baker, executive director of the Texas Commission on Environmental Quality. The water can’t be restored until tests prove it’s safe to drink, which could take days, he said.

"It is an ongoing issue, and this number is probably going to grow over the next day or two," Baker said.

"They had to watch that house burn," City Manager Robert Hanna said Tuesday at a news conference.

Marc Eichenbaum, a special assistant to the Houston mayor, said the temporary downtown shelter opened Sunday and took in over 800 people at one point this week. It is enforcing social distancing and mask-wearing.

"We still have heat," Eichenbaum said yesterday afternoon. "Power has stayed on, and we still have water here."

Some guests have homes, while others don’t — but can work with the city on options. Studies have shown that minority communities often see major effects from power outages, and the same is true with cold weather. Eichenbaum said people of color make up about 80% of the homeless population in the Houston metropolitan area.

Deaths from exposure, fires and carbon monoxide poisoning continued to pile up from the ongoing winter storm.

White House press secretary Jen Psaki said the White House and the Federal Emergency Management Agency have been in touch with governors in the storm-ravaged states and that FEMA has moved generators into Texas and is preparing to move diesel into the state to provide backup power for communication, hospitals and water.

FEMA is also supplying Texas with water and blankets at the state’s request and is processing requests from other states for emergency assistance.

Reps. Lizzie Fletcher (D-Texas) and Marc Veasey (D-Texas) sent a letter in support of the Federal Energy Regulatory Commission’s investigation of grid failures. And they asked about the possibility of certain limited energy transfers into the ERCOT region in emergencies.

"Our first priority must be getting power and water back in people’s homes," Fletcher said in a statement. "After that, we have to have a full investigation into exactly what happened, why it happened, and what we need to do to make sure it does not happen again."

The Electric Reliability Council of Texas (ERCOT), which operates the state’s main power grid, began ordering utility companies to shut off service to their customers early Monday morning. Within hours, a combination of factors had overwhelmed the system, ERCOT officials said at a news conference (Energywire, Feb. 16).

Dozens of power generators that supply the state’s competitive wholesale electric system were unable to provide electricity. At the same time, the biting cold, which eclipsed daily temperature records in Dallas and other cities, caused a jump in the demand for electricity. Snow blanketed the state from Oklahoma to the Gulf of Mexico.

ERCOT is largely unconnected to the rest of the nation’s electric grid, and it was unable to import large amounts of power. It was forced to order wider power outages, to avoid a catastrophic blackout that could have lasted as long as a month, ERCOT President and CEO Bill Magness said on a conference call.

Normally, the local distribution companies would be able to rotate the power shut-offs among different neighborhoods, but they couldn’t do it because the scale of the outage was so big. So in many parts of the state the power went off and stayed off as temperatures plummeted.

ERCOT explored ways to harden its grid after a 2011 cold snap that also led to controlled outages. Magness said yesterday that those ideas hadn’t been fully carried out.

As of 6 p.m. local time yesterday, about 43,000 megawatts of generation — almost 17,000 MW of wind and solar and 26,500 MW of coal, gas and nuclear — was unavailable in light of the winter storm. Gas plants were particularly affected because individual gas wells froze in the field, creating a shortage. Plus, many gas plants were built without a surrounding building so they’ll operate more efficiently in the summer, said Dan Woodfin, senior director of system operations at ERCOT. That means their equipment is more likely to freeze in the winter.

ERCOT wrote winterization guidelines after the 2011 cold snap for companies that provide power on its grid, but they’re voluntary. The state agency normally inspects 100 generation plants a year to see if they’re complying with the rules, but it was forced to do virtual visits because of the COVID-19 pandemic, Woodfin said.

Abbott has called for ERCOT’s leaders to resign and asked the Texas Legislature to reform the grid operator.

Magness said he’s concentrating on dealing with the crisis and restoring power.

"The blame can be assessed very soon," he said.

Members of both chambers of the Legislature are expected to hold hearings on the disaster and on ERCOT’s performance (Energywire, Feb. 17).

Abbott said he wants lawmakers to investigate the agency’s response to the 2011 cold snap and maybe "reevaluate" some of the decisions the state government made then. ERCOT has historically not been transparent, he said.

"We want to make sure we are capable of ensuring the state will be able to withstand cold spells like what happened this time," he said at a news conference.

House Speaker Nancy Pelosi (D-Calif.) said in a statement yesterday that extreme weather "poses risks to the grid that require smart and urgent investments to reduce blackouts and brownouts."

Borrowing a Biden campaign phrase, Pelosi said, "Together, we must build back better an electric grid that’s cheaper, cleaner and more reliable."

Ken Medlock, senior director of the Center for Energy Studies at Rice University, said there are potential solutions to Texas’ grid problems, but he stressed that this week’s storm was a rare event.

"Even if the market structure were different, it is highly unlikely things would have been significantly different," he said in a post on LinkedIn.

Medlock, who lost power, said the state could harden its infrastructure and work to address problems that cut into wind production. He also noted the reduced supply of natural gas from "freeze offs" at wellheads, compressor stations and processing facilities.

"Obviously, if ERCOT could wheel power in and out of the state, that could help," he said. "But there have been outages in neighboring regions as well with this event, so I am unsure that even matters for this discussion."

Many Texas leaders are likely to fight attempts to make the ERCOT grid have more significant connections to other regions, but it remains to be seen how that will unfold.

"They must follow directives from ERCOT and other grid operators," Kuhn said in a statement. "Our frontline employees who operate the transmission and distribution systems are actively keeping that system operational and in balance, while restoring power to customers as soon as generation resources become available."

The finger-pointing was no comfort to Gerald Zenick, a retired newspaper executive in Fort Worth.

He and his wife, who are in their 70s, lost power at their home early Monday morning. They were able to heat their bedroom with a borrowed space heater connected to a neighbor’s generator, but the rest of their home remained at about 46 degrees Fahrenheit, Zenick said yesterday by telephone.

"The whole system needs to be evaluated, and the governor jumping on his high horse isn’t going to help anything at this time," he said.

Klump reported from Houston, Lee from Fort Worth and Clark from Washington. The Associated Press contributed.